Students Rally for Harvard To Divest 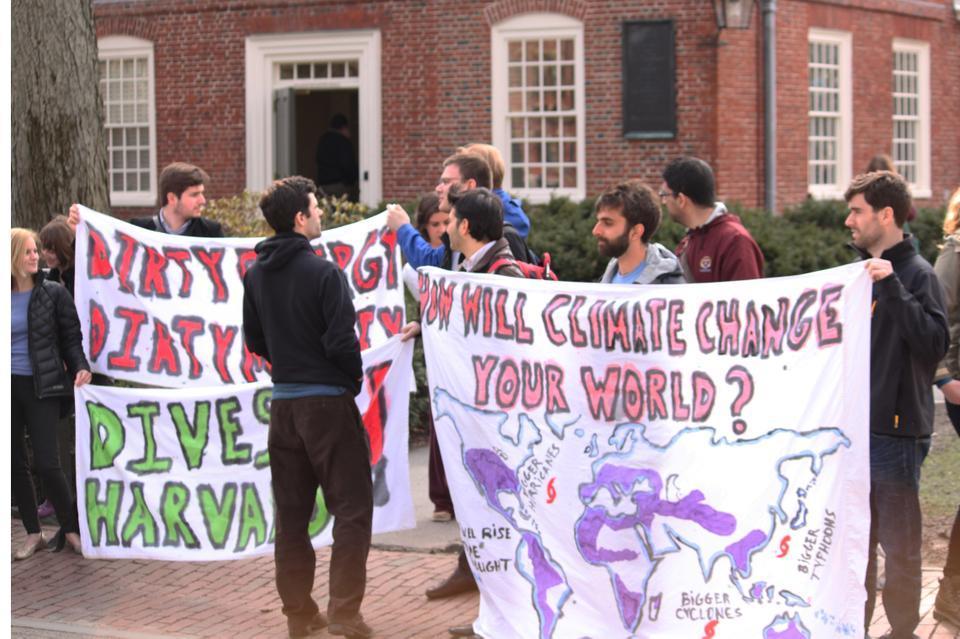 More than 100 members of the Harvard community rallied outside Massachusetts Hall on Thursday to deliver a petition calling for Harvard to divest from fossil fuels.

Divest Harvard, the group that organized the event, has collected over 1,300 signatures from students, faculty, and alumni since the movement began in September.

“The goal of today is to show President Faust and the Harvard Corporation that there is strong student support for divestment, and that the administration needs to take that support seriously,” said S. Krishnan Dasaratha ’13, one of the organizers of the event. “We hope that she or a member of the Corporation will accept our signatures and indicate willingness to have a conversation about divestment in good faith.”

Since February, Divest Harvard has met with the Corporation Committee on Shareholder Responsibility, a committee consisting of four members of the Harvard Corporation that helps to determine the University's stance on matters related to social responsibility.

The Corporation has previously voted on issues regarding investment, including the decision to divest from tobacco manufacturing companies in 1989, as well as from companies involved in oil production in Sudan in 2005 and 2006.

However, the Corporation has maintained that it does not want to use divestment as a political tool. The University’s website for its Shareholder Responsibility Committees reiterates a statement from when the Corporation decided to divest from Sudanese oil.

“The University is first and foremost an academic institution,” the statement reads.

As indicated by a referendum on the Undergraduate Council election ballot in November, students have expressed their interest and concern about the issue,

UC President Tara Raghuveer ’14 said that 72 percent of the voters voiced their support for divestment.

During Thursday’s rally, protesters marched around Massachusetts Hall and chanted, “We are the movement! We want divestment! We will not stop, we have the power!”

David W. Keith, a professor of applied physics and of public policy, who also spoke at the rally, acknowledged the importance of divestment, but suggested alternative ways that students could help the environment. Keith recommended making the campus more sustainable, as well as cutting coal fuel emissions nationwide.

Many student protesters said that they came out to demonstrate the gravity of the issue.

“The choices we make in our lifetime are going to affect the human race profoundly for thousands of years,” said Benjamin Franta, a graduate student and co-coordinator for Divest Harvard. “It is not just an economic challenge; it is a moral challenge.”

At 4:37 p.m., Marc L. Goodheart ’81, secretary of the Harvard Corporation and University vice president, came out of Massachusetts Hall to collect the petition.