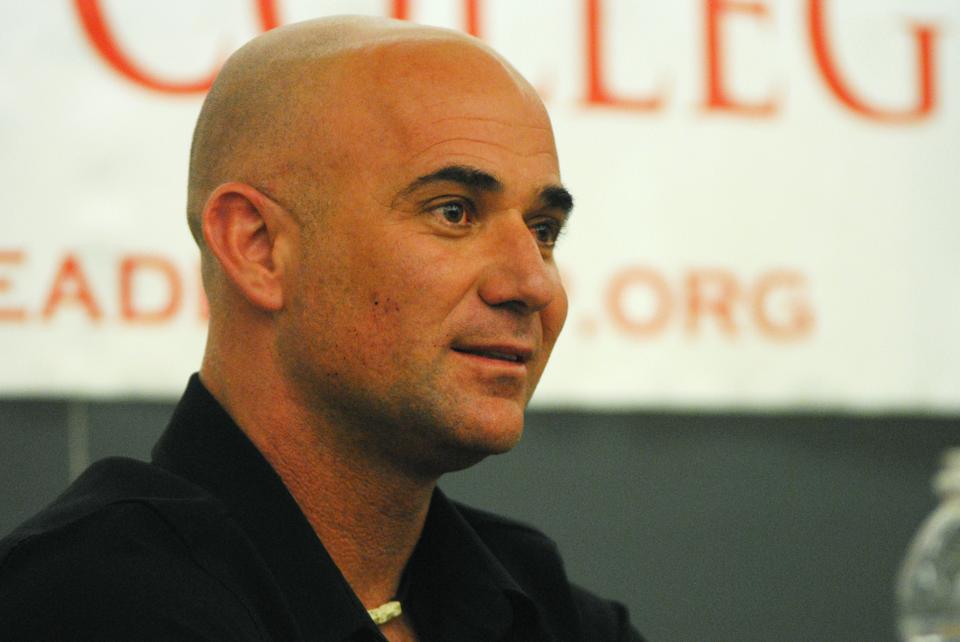 Andre Agassi talks to students about his tennis career and perfectionism, giving the advice to understand when things are out of one's control. Agassi was a guest of the Leadership Institute at Harvard College on Tuesday.
By Jason A. Solis, Contributing Writer

Before an audience of over 400 packed in Emerson Hall Tuesday evening, former world No. 1 tennis player Andre Agassi shared stories of his experiences in tennis and his strategies for overcoming challenges he faced.

At the event, organized by the Leadership Institute at Harvard College, the eight-time Grand Slam champion and Olympic gold medalist reflected on the challenges he faced during times of personal turmoil and recounted the journey that led him to be the person he is today.

“When you hit a wall, you’re going to get tired,” Agassi said. “And when you do, you need to control what you can and find a way to let go of what you can’t.”

Agassi applied this mentality to students at the College, urging them to push through despite whatever they may think is holding them down.

“You all sit in a rare seat. Your discipline, perfectionism, courage, you’ve shown these things for many years and that’s why you’re here. My hope for you is when you feel overwhelmed, allow yourself to be a work in progress,” Agassi said.

Apart from his successful tennis career, Agassi was also invited to speak because of his significant philanthropic work.

In 1994, Agassi founded the Andre Agassi Foundation for Education, which to date has raised over $177 million to support public education for underserved youth.

Wesley A. Friedman ’16, a member of the Leadership Institute who organized and moderated the event, said he was extremely satisfied with its outcome.

“Andre did an incredible job of getting his message across to the audience,” Friedman said. “It’s hard to find people willing to talk about their life in a raw and honest way. I couldn’t think of a more perfect leader to speak to us.”

Agassi detailed his rise, fall, and subsequent return to the top of the tennis world while battling personal demons along the way.

After rising to the world No. 1 ranking in 1995, Agassi’s career seemed to be on the decline. By 1997, he had sunk to No. 141, as he battled a wrist injury and growing drug addiction that year.

But Agassi said that driven by his desire to play only for himself, he gradually began a comeback, and by 1999, Agassi had reclaimed the top ranking.

“It wasn’t about me achieving anything, it was about me wanting a journey and embracing it, whatever the ups and downs were,” Agassi said.

Nicholas M. Folger ’15, who also helped organize the event, was delighted with Agassi’s talk and how the event turned out.

“Andre is truly a genuine role model,” Folger said. “He portrayed that to everyone tonight, and Wesley also did an excellent job moderating.”

Looking forward, Agassi said that every experience leads you to the next step in life.

“The next stage is most important,” Agassi said. “Trust yourself. You have the tools to take a step closer to your goals. Think about what you want to do and enjoy that, the good and the bad.”