'Jesus of the People' Artist Reflects on Art and Inspiration 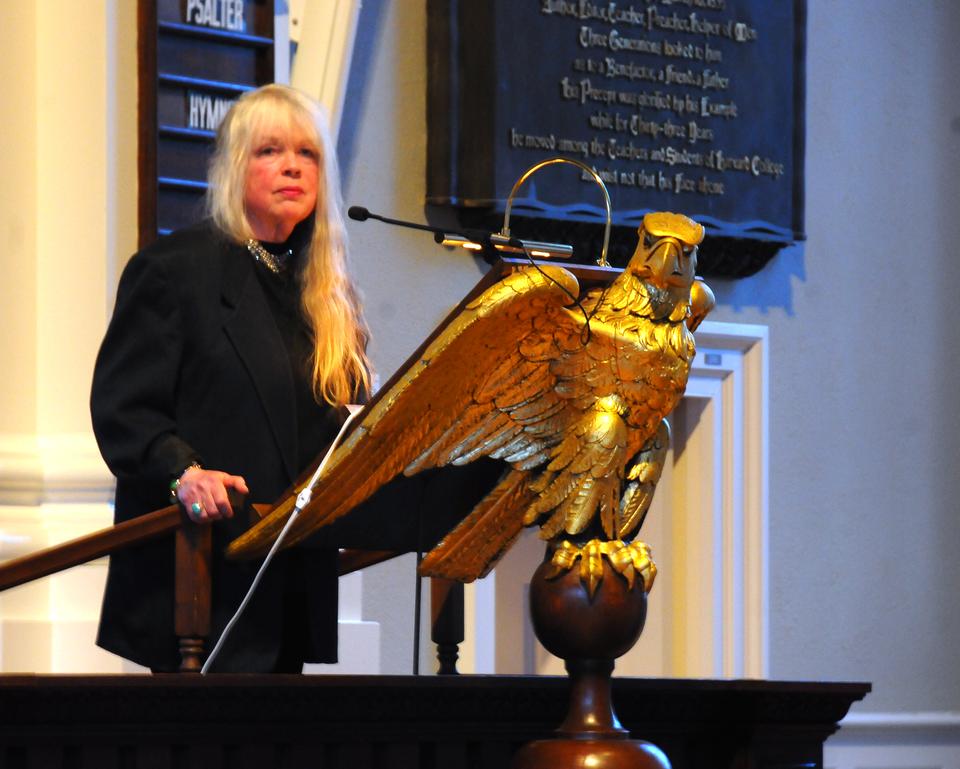 Artist Janet McKenzie shares her original interpretation of Jesus of the People and its influence on her life Monday evening at Memorial Church.
By Anne A. Power, Contributing Writer

Standing behind her acclaimed painting “Jesus of the People”—a depiction of Christ as a young black man—artist Janet McKenzie spoke about her art and inspiration Monday night at Memorial Church.

In honor of the Arts First festival last weekend, Memorial Church displayed this painting and several of McKenzie’s other works. Her art depicted a series of religious subjects, dominated by a recurring black Madonna figure.

In his introduction to the lecture, Reverend Jonathan L. Walton, Pusey Minister in Memorial Church and Plummer Professor of Christian Morals, elaborated on the unique perspective McKenzie brought as a female artist devoted to creating religious art that incorporates racial and sexual diversity.

“It is important to bring someone to this space that reminds us we are all made in the imago dei, the image of God,” Walton said.

In a speech entitled “Longing and Hope—My Journey into the Sacred,” McKenzie said that the death of her mother when she was 24 led her to focus on marginalized people, especially women, in her art.

“To give women, all women, a voice through my art is one of my calls,” McKenzie said.

McKenzie spoke primarily about “Jesus of the People” and its impact on her life. She created the painting for the 1999 National Catholic Reporter competition that challenged artists to portray Christ for the new millennium. McKenzie said her inspiration was her nephew, who, as a young man of color, had trouble relating to her work. Chosen out of 1,700 entries, “Jesus of the People” took off in a way McKenzie never expected, garnering worldwide attention and praise.

A self-described “recluse” living a “monastic” life in the Northeast Kingdom region of Vermont, McKenzie said she was left “numb” and “shocked” after such widespread publicity.

McKenzie said that while she faced dissent from the Westboro Baptist Church and others in response to her paintings, these responses did not keep her from creating more inspiring and inclusive works of art.

She showed several of these additional works on a projector and described the backstories that inspired her to portray religious themes such as the Magi or the Holy Family.

Susan B. Grefe, a long-time Memorial Church-goer, said she is an admirer of McKenzie’s work due to her “clear” and “not cluttered” style, adding that McKenzie’s work inspires her to “look at religious art in a new way.”