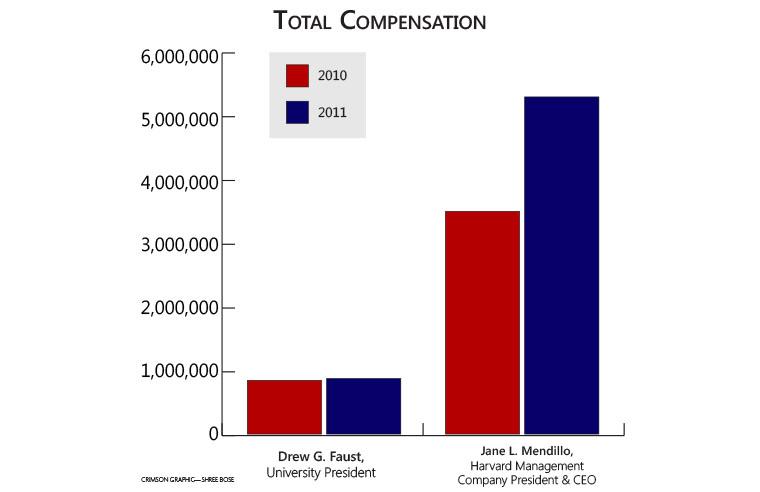 University President Drew G. Faust received $899,734 in salary and benefits in 2011, according to a recent filing with the Internal Revenue Service.

While that figure is about the same as last year’s, Harvard’s chief investment manager, who is paid far more than most administrators, saw a 52 percent increase in her earnings.

Faust’s compensation package includes $729,106 in reportable compensation, and the rest refers to benefits including her residence at 33 Elmwood, the Cambridge mansion that Harvard presidents have occupied since the early 1970’s.

In 2010, Faust’s total compensation equaled $875,331. Faust’s earnings are still significantly lower than those of many other University presidents, some of whom make well over a million dollars per year. The highest-paid University president in 2010 was J. Robert Kerrey of the New School, who made $3 million that year, according to the Chronicle of Higher Education. Its review of executive compensation found that 36 presidents of private colleges made more than a million dollars in 2010.

But Faust’s pay is much lower than that of other top Harvard employees. The compensations of officials at the Harvard Management Company, which oversees the University’s $30 billion endowment as well as its other investments, as usual far outpaced those of any administrators involved directly in the University.

HMC President and CEO Jane L. Mendillo took home $5,323,753 in 2011, according to a press release Wednesday, while the company’s Head of Alternative Assets Andrew G. Wiltshire received $6,608,581 in total compensation, making him the top earner at HMC that year. HMC’s Head of Public Markets Stephen Blyth, who is also a statistics professor, made $6,161,489.

Those figures are significantly higher than their compensation in 2010, when Mendillo received $3.5 million and Wilshire, $5.5 million.

Still, they are far lower than those in the more distant past. In the early 2000s, some HMC investment managers earned more than $25 million per year, but those salaries fell following outcry from students and alumni.

The press release noted that more than 90 percent of the HMC officials’ compensation is variable and based on the performance of investments in a given year.

“This compensation system is designed to closely align the interests of the University with its investment professionals,” said James F. Rothenberg ’68, who is the University’s treasurer and chairman of HMC’s Board of Directors, in the announcement. “HMC’s market-beating performance in the reporting period once again added value to the resources upon which Harvard depends to fulfill its teaching and research mission.”

In addition to Faust, Harvard’s recent tax filing details the compensation of several other administrators in 2011. Provost Alan M. Garber ’76, who took office in September of 2011, received $432,808 in salary and benefits from Harvard that year, while Executive Vice President Katherine N. Lapp made a total of $620,534.

Including benefits, Dean of the Business School Nitin Nohria was the highest-paid school dean with a total compensation package worth $662,054, followed by Medical School Dean Jeffrey S. Flier at $621,373 and Public Health School Dean Julio Frenk at $606,612. Dean of the Faculty of Arts and Sciences Michael D. Smith received a total of $509,613 in salary and benefits.

An earlier version of this article incorrectly stated that compensation packages for Harvard administrators were reported for fiscal year 2011 when, in fact, those figures are for their compensation during the 2011 calendar year. The story also incorrectly stated that University President Drew G. Faust’s 2010 calendar year earnings were for 2010 fiscal year.