In the aftermath of the Boston Marathon bombing, reporters assess the new role of Twitter and other platforms. 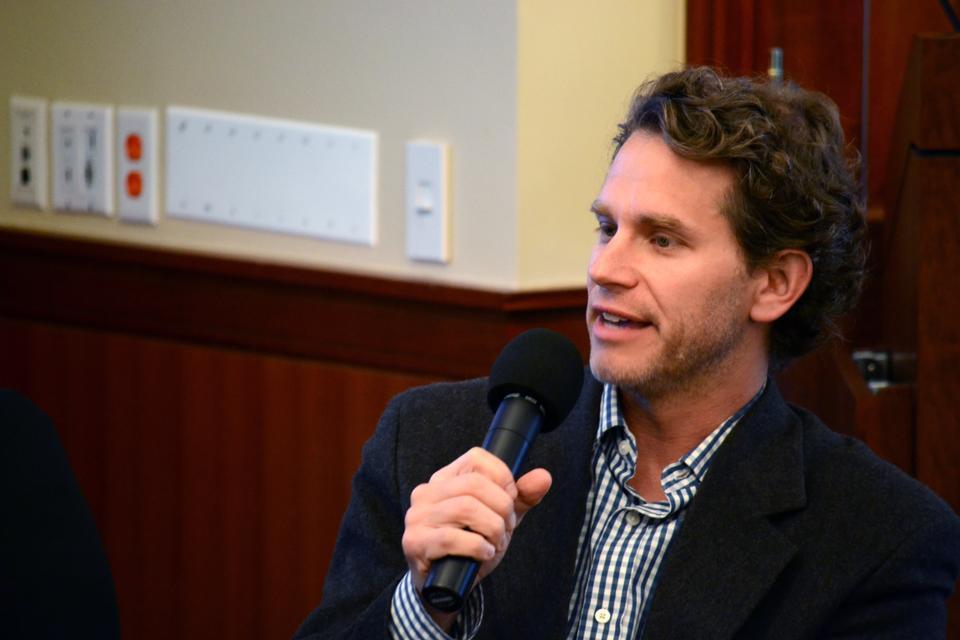 Nieman Fellow David Abel chronicles his experience at the finish line of the Boston Marathon, where he was filming a documentary, during a panel at the Nieman Foundation on Wednesday evening. Initially, he thought the first explosion 10 feet away from him was a system malfunction; but after the second bomb, just like when the second plane hit the Second Tower, he knew it was an attack.
By Bharath Venkatesh, Contributing Writer

Speaking at a panel discussion at the Walter Lippmann House Wednesday evening, several professional journalists said that Twitter fundamentally shaped the way they covered the Boston Marathon bombings and the ensuing shootout and manhunt.

The panel, entitled “Timing, Trust, and Credibility in the Age of Twitter,” was hosted by the Nieman Foundation for Journalism at Harvard and brought together journalists who played a key role in reporting the events that unfolded in Boston in the past few weeks.

Boston Globe reporter and 2013 Nieman Fellow David Abel said he tweeted throughout the afternoon on the day of the bombings.

“For me, Twitter became an outlet that I don’t necessarily have as a reporter, where I’m writing in third-person,” Abel said. “The story that was written was shaped through my tweets.”

Seth Mnookin, co-director of MIT’s Graduate Program in Science Writing, said that Twitter’s timestamps made his coverage of the manhunt so precise that he used his tweets as notes for his reporting.

Panelists also discussed the role of the citizen journalist in the bombing coverage.

As thousands of laypeople turned to social media such as Twitter, Reddit, and Facebook to disperse and learn information about the tragedy, rumors and false reports spread quickly.

In such an environment, panelists said, it became more important than ever for professional journalists to get the facts right.

“When there were mistakes made by credible institutions in this case, it was devastating,” said Callie Crossley, host of WGBH’s “Under the Radar.”

“We had to be very cautious,” said panelist David Beard, engagement editor at the Washington Post. “We mobilized from afar and tried to do the right sort of sourcing...we had to figure out who didn’t know, and who did.”

While panelists said that social media increased the likelihood of speculation, misreporting, and the loss of journalistic credibility. Mnookin said that Twitter can somewhat paradoxically help reporters improve their image.

“One way that we can get more credible as journalists is by being more transparent about the whole process,” Mnookin said.

“One of the things that’s happening with Twitter is that the whole [journalistic] process that we do is being demystified,” he added.

“There were pitfalls, but it was an incredible vibrant way to watch what was happening,” said.

“As a journalist, I feel that Twitter has given us a very valuable new tool, if used properly,” Peter added.