Janet Reno, J.D. '63, And Her Long Path From Cambridge to The Capitol 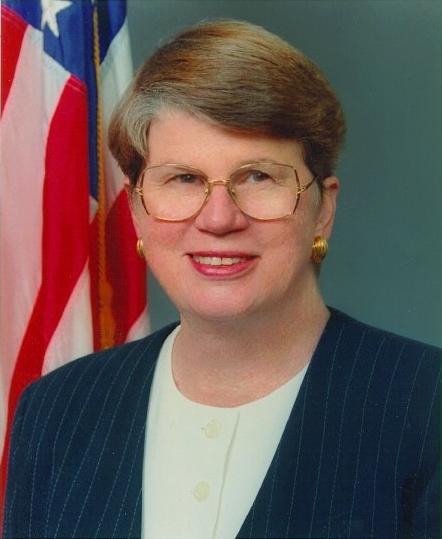 Dean of Harvard Law School Erwin N. Griswold hosted the 16 women admitted to the Class of 1963 in his home in the fall of 1960. Over tea, he welcomed them and expressed excitement in having the women represented in the class he had helped pick.

“But I can’t for the life of me figure out what you’ll be doing when you graduate,” one of the female students, Siegrun Dinklage Kane, remembered him saying, referencing the male-dominated law profession.

Janet Reno was one of the students in Griswold’s study that day, a member of the Law School Class of 1963. In less than three decades, Reno would become the most powerful attorney in the nation, serving as former President Bill Clinton’s Attorney General for seven years.

Reno, who cites Griswold and her Harvard professors as inspiration and mentors in her legal career, graduated near the top of her class three years after the tea in the dean’s house. Friends and classmates say that the intellect, grounded nature, and drive which defined Reno’s career in public service began long before she entered the workforce.

Remembering her first day of law school, Reno said in an interview with the New York Times in 1994, “I don’t think I’ve ever felt so lost as I did then,”

That week, in the first day of a torts class, Michael S. Yesley ’63 remembers that the professor—who employed a “traditional mode” of pedagogy—called on Reno.

“[The professor] called on [Reno] first to recite a case and then answer questions about it using the usual Socratic method of the Law School,” Yesley says. “He gave her a real hard time, but she was very matter of fact and held up under the barrage of questions.”

But Reno was used to questioning and debate. Born in Miami in July 1938 as the daughter of two investigative reporters, Reno was a debate champion and valedictorian of her high school. She majored in chemistry at Cornell and served as the president of the Women’s Self-Government Association. Immediately following her graduation in 1960, she enrolled at the Law School.

As a student at the Law School, Reno lived off campus, spending one year with a professor and his family, according to Paul Anderson’s biography of Reno. She was “known to take long, solitary walks through historic neighborhoods and cemeteries,” Anderson wrote.

Reno commented for the biography that a talk she attended at Memorial Hall given by Eleanor Roosevelt would stay with her “as love as I live.”

Reno’s presence at the Law School was remembered by many of classmates, whether they had classes with her or not. Standing at 6’1” “she was tall…so she definitely stood out,” Neil L. Chayet, former classmate of Reno’s, said.

When Reno was a student at the Law School, there was only one women’s bathroom on the campus, found in the basement of Austin Hall. Professor W. Barton Leach ’21, who joined the Law School faculty in 1929, did not allow women to speak in class, saying their voices “were not powerful enough to be heard,” according to Charles Nesson, a former classmate of Reno’s, quoted in Anderson’s biography.

“The three or so women that were in that section would get up, and theoretically run the class. And [Leach] would sit in the front row and smirk while we ran the class—or tried to.” Kane said.

Nesson said Leach would sit in the back of the class with the male students, questioning the women in the front.

“We sat through that and laughed, without the thought ever occurring to us that something totally wrong was happening,” Nesson said. “It had to have had some powerful effects on [Reno] and the others.”

Reno had no trouble making her voice heard, according to her peers.

“She certainly stands as a role model,” Yesley said. “And it’s not just because she did it, but I think she has a strong personality and in part it may be because she’s taller than most of the guys that she might be arguing with.”

Yesley added that he and his male peers had “admiration” for Reno and her fellow female classmates who “were brave enough to enter what at the time was essentially a man’s world.”

Despite discrimination of women, Kane said that they had a platform in both the Law School community and the professional world because they were largely anomalies.

“I always felt that being a woman was an asset because people, whether they thought you should or shouldn’t be there, they paid attention. When you walked down the aisle everybody wanted to know, what is she going to say and how is she going to say it,” Kane recalled of her experiences post-law school.

Following graduation, Reno returned to Miami. After spending a little less than a decade in private practice, Reno built a career as a state attorney prosecuting child abusers. In 1993, Clinton nominated Reno as Attorney General, a post she would be confirmed for, making her the first woman to have the position. Reno served until the end of his presidency, making her the longest-serving Attorney General since 1829.

A month after her confirmation, Reno approved the use of tear gas in an FBI raid of a religious cult’s barricade in Texas following the alleged violation of the federal firearms laws. The ensuing raid lead to a 51-day siege and an eventual fire resulting in over 80 deaths. The “Waco massacre” became a major source of controversy and criticism for Reno.

Despite criticism, the New York Times’ David Johnson praised Reno’s continued advocacy for underrepresented groups in her tenure at the Justice Department.

“In a period when crime rates have been falling, Ms. Reno has been an advocate for law enforcement and measures against youth violence and violence against women,” Johnson wrote.

As Kane recalled, Reno always pursued her own sense of direction.

Kane said she saw Reno as someone who was not going to play the politics.

“She wasn’t going to do something because somebody was lobbying her for whatever reason,” Kane said. “She was going to do what she thought was the right thing and the best thing and I think she did that for certainly her entire career at the Attorney General’s office.”