Classes In The Yard By Day, Music In The Square By Night: Tom Rush '63 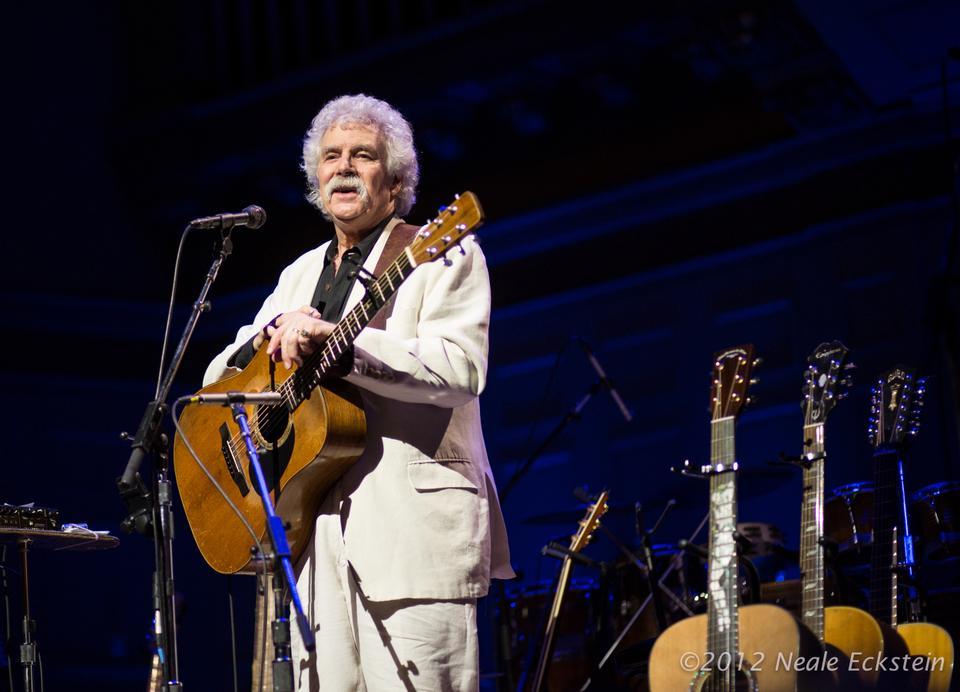 It started with a ukulele. Tom Rush ’63-64 was ten when his cousin Beau taught him how to play. Rush says that his prior five years of piano lessons had been torture, but on the ukulele, he had fun. Soon, Rush graduated to the baritone ukulele, an instrument that “felt pretty manly” compared to its predecessor, and before long he was strumming a guitar.

Taking classes in the Yard by day and playing venues and coffeehouses in the Square by night, Rush launched a successful career during his undergraduate years at Harvard. A force on Harvard’s bustling folk scene, Rush would become an important figure in folk revival in 1960s and 70s.

Rush’s love of music quickly translated into performance. During his years at Groton School, Rush used his ukulele to do imitations of Elvis and other popular musicians of the day.

“He had the hair for it, too,” remembers Phil Tilney ’63, Rush’s Harvard roommate of three years and a fellow Groton classmate.

Born in 1941 in Portsmouth, New Hampshire, Rush’s father worked at St. Paul’s School in Concord, New Hampshire. While Rush imitated popular musicians at Groton, Rush’s musical interest turned to folk when he arrived at Harvard in 1959.

“When I got to Cambridge, it was a hotbed of folk music,” Rush remembers.

While at Harvard, Rush majored in English and hosted a folk show on WHRB, Harvard’s radio station, called “Balladeers.” The show lasted for 30 minutes on Tuesdays, and hosting the program required Rush to find guests to perform live on the air.

“I started trolling the hootenannies to find guests for the show,” Rush recalls. The hootenannies were folk music parties that included an open mic component. In frequenting local hootenannies, Rush learned that he could get admitted to performances for free if he had a guitar with him. He could even get in for free with an empty guitar case.

Rush spent the summer after his freshman year performing on the streets of Paris, which Tilney believes gave him the confidence to start performing at venues regularly when he came back to Cambridge.

“Between The Unicorn, The Golden Manatee, Café Yana, and Club 47 one could get three to four gigs a week if he was popular, and Tom was popular,” recounts Betsy Siggins who ran Club 47 when Tom performed there. Club 47, now Club Passim, is in a basement on Palmer Street, near what is now LF Stores and across from the COOP.

“Tom was quite exceptional in the fact that he was a Harvard student first, and a folk musician second,” she says.

Rush felt that Club 47 was “the flagship of the fleet” of folk coffee houses, and he performed there on an almost weekly basis throughout his undergraduate years.

“The older generation would come here and play for the kids, and sometimes the kids would get a chance to play for them, too,” he said. This collaboration and exchange, passing down of music between the generations, continued to be an important part of Rush’s musical career and legacy.

Rush took a year off after his junior fall to travel around the country and perform, and when he got his college degree in 1964 he had already recorded and released his albums “Tom Rush at the Unicorn” and “Got a Mind to Ramble.” In 1965, Rush signed with Elektra Records and continued performing at Boston coffee houses and other East Coast venues.

In 1966 Rush was performing on tour when he stopped at a music club in Detroit, the Chess Mate. That evening, a young woman asked the owner if she could do a guest set so that Rush could hear her sing. Her name was Joni Mitchell.

At that time, Rush was trying to compile songs for another album, so he asked Mitchell to send him a tape. The tape she sent included the song “The Circle Game,” and Rush liked the song so much that it became the title track of his next album. Released in 1968, “The Circle Game” also included covers of songs by James Taylor and Jackson Browne—two other artists that Rush helped popularize.

“I was at a point in my career when I didn’t know what to do next, then along came these three stunning songwriters at the same time,” Rush remembers, adding that he thinks their songwriting was critical to the album’s success.

“The Circle Game” also featured original songs, including his often-covered tune “No Regrets,” which has become a folk standard.

“[Rush] had a good ear for finding singer-songwriters,” says Todd Kwait, a filmmaker who is currently making a documentary about Tom Rush’s life. Kwait argues that Tom’s success hinged on his ability to cover many genres well, his handsome appearance—which Kwait describes as “the Harvard look but also the urban-cowboy type look”—and his ability to find fresh talent.

In the early 1980s, Rush heard that Boston’s Symphony Hall went unused between Christmas and New Year’s Eve. So, in 1981, Rush decided to use that week to create a forum like Club 47 in Symphony Hall, one that would combine established folk artists and newer folk talent. The plan worked. Rush filled Symphony Hall in the week leading up to New Years for multiple nights, 8 years in a row until the space was unavailable.

But last year, for the first time in 30 years, Rush successfully launched a campaign to rent out Symphony Hall on Dec. 28 to throw a concert celebrating 50 years of performing.

Rush used Kickstarter—an online funding platform for creative projects—to raise more than the $100,000 he needed to rent the hall in one week.

Kwait says this is typical of Rush, who always had a smart, business-minded approach to his music and was quick to adapt to new technologies like social media.

“Tom just turned 72 and here he is selling out symphony hall doing this huge concert,” says Tilney. “He’s still a wonderful performer and giving it 100 percent.”

—Staff Writer Ginny C. Fahs can be reached at fahs14@college.harvard.edu.