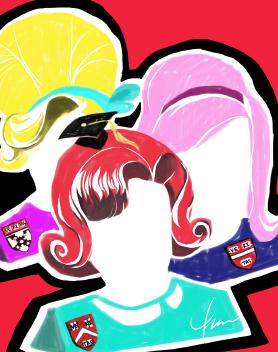 Betty J. Diener was one of the first women to graduate from Harvard Business School, earning her diploma in 1964. But she first heard of “feminism” after she left the school’s Allston campus:

“I remember, probably in about 1965 or 1966, going to a presentation by one of the women’s magazines. They were saying that they thought feminism would be the big topic in the next 10 years,” Diener said. “And none of us had ever heard of it.”

Diener was on campus during a time of change for women across the University. Women were confined to living in the Radcliffe Quadrangle but attended classes in the Yard with male students. 1963, At the undergraduate level, Radcliffe students were given the option of having “Harvard College” printed on their diploma, instead of just the default, “Radcliffe College.”

But by 1963, most graduate schools had or were beginning to accept women. Eight women were accepted to the Harvard Business School’s full two-year MBA program for the first time as a part of the Class of 1965. Sixteen women graduated that year from the Law School. And in 1963, the Radcliffe Graduate School closed and the Harvard Graduate School of Arts and Sciences began accepting women.

But Diener and many of her peers at graduate schools at the time say it was too early and their numbers too few to overcome or challenge the hegemony of the male-dominated academic community. The carefully selected and amply qualified first guard of women entering the graduate schools, however, did not view themselves at the time as feminist pioneers, instead focused on their own studies and success.

“In going back to reunions, most of the guys think I’m there because of my husband,” said Janey G. Lack, a 1964 graduate of the Business School. “Some people didn’t even know there were women on the campus.”

In spite of Harvard women’s monumental achievements in the early 60s, there were “just too few [women] to make any difference in the societal environment that we were in,” Diener said.

“Women’s empowerment was something they were talking about back then, but I certainly wasn’t looking at it as women empowerment,” said Judy L. Allen, a 1963 graduate of the Business School. “I was looking at it as though I was going to get the best education I could possibly get, so that I could get the best job I could get, until I got married. And that’s what was in my mind back then.”

“We were barrier-breakers, but none of us were climbing the barricades or waving their bras or anything like that. We were just very focused,” Diener said.

At campuses across the University, female students had similar sentiments. Despite the addition of the Harvard name on Radcliffe students’ diplomas, the lives of female students were not greatly affected while still on campus.

Jill A. Kennedy ’63 remembers walking from the Radcliffe Quad to Harvard Yard, even in the cold winter months, wearing a skirt--the uniform required of all Radcliffe students.

“As soon as they had the men up in the Quad, they got shuttles,” she said. Though she remembers it humorously now, she said it irked her at the time.

Radcliffe women were forbidden to enter Lamont Library, as they might “upset the gentlemen’s concentration,” said Judith A. Dollenmayer ’63. She also remembered having to bring bagged lunches to school every day and being required to eat separately from her male peers.

“1963 was too early for a widespread sense of empowerment. I wish there had been more of a sense of empowerment, I wish we had talked more and prepared more for what would happen after we graduated,” she said, citing the hardships that women still faced in the workplace.

Betty Friedan’s The Feminine Mystique, a book that propelled the feminist movement for equality, was published in 1963. However, it took longer than that to reach Harvard’s campus on a larger scale. It did not have a visible presence on campus, and neither did the roots of the feminist wave it sparked.

“We didn’t have a language to express our discontent,” Dollenmayer said.

By the early 60s, both the Medical School and the Law School had been accepting women for over a decade. The Business School, however, did not accept women into its full two-year program until 1963.

Before the Harvard Business School was open to women, Radcliffe students were allowed to participate in the Harvard-Radcliffe Program in Business Administration, with the same professors and case studies as their male counterparts across the Charles.

Beginning in 1959, women from the program could apply to attend the Business School for their second year and receive a MBA from Harvard. In 1963, the first eight women were accepted into the full MBA program.

Business School graduates of the Class of 1964 credited this achievement to their hard work and dedication during their time in the program.

“My HRPBA class absolutely closed down the HRPBA program and put women on the campus,” Lack said.

Allen agreed that her own class greatly influenced the situation. “Because we did well, they allowed women to be admitted into the first two-year class for the HBS,” Allen said, referencing their academic and social achievements.

In 1960, three women received Harvard MBAs with the new ability to complete the first-year at Radcliffe and their second-year across the Charles. In 1965, the number had increased to 11. Many women said they felt that they were paving the way for future generations of female students.

“I felt a great responsibility to do very well, to show the administration that we were absolutely as good as the guys,” Allen said. “But it wasn’t a big thing across my chest...you always wanted to do your best.”

Though some women believed that men felt “threatened” by their presence, they never let themselves feel subordinate to their male peer and professors.

“I don’t have the type of personality that was going to let them make me feel inferior,” said Caryl R. MacLaughlin, a 1985 graduate of the Business School. “I don’t know about the other women, but I was interviewed in person. I’m pretty sure that for them to go ahead and start this experiment, I would assume that they were very careful about who they accepted.”

EMPOWERED FOR THE FUTURE

In carefully picking the first classes of women to matriculate at many graduate schools, Harvard created a powerful group of women who would go on to succeed in a variety of fields. However, many women have only realized this after much reflection.

“If you had asked me in 1963 when I went to Harvard, or in 1964, if Betty Friedan and all that full array of women and their voices were important to me, then personally, I probably would have shrugged my shoulders and said, ‘I don’t think so,’” Lack said.

However, Lack said that she now looks back and sees that these forces must have had some impact with the issue of putting women on campus.

“We were really accomplished. We have all have done extraordinarily well, and I’m so proud of my own path,” said Lack, speaking about herself and her female classmates. “I’ve been empowered by [my education], but I don’t know that there was a sense of empowerment at the time.”

Even though Lack said she believes that the real women’s revolution came after she graduated, Kennedy felt that there was a sense of individual empowerment in many female students, more so than at other institutions.

“[My female classmates] had a sense that they were going to do things,” she said. “They were there to be educated.”

Others believed themselves to be in the minority when it came to desiring independence from social norms.

“I don’t think that many women I knew at Harvard felt the need to be empowered. We had roles created by our family background and society. I never followed those rules,” Pollet said. “I struggled to break barriers.”

Graduates of the Class of 1963 were a part a growth in the number of degrees conferred to women across the University and the addition of the Harvard name may have opened doors, but these opportunities were not realized until much later-and some have yet to be achieved.

“In retrospect, there’s been a lot of rewriting of history as though Harvard were a really feminist place in the early 60s,” Dollenmayer said. “There’s still a lot of work to do today, in my opinion.”