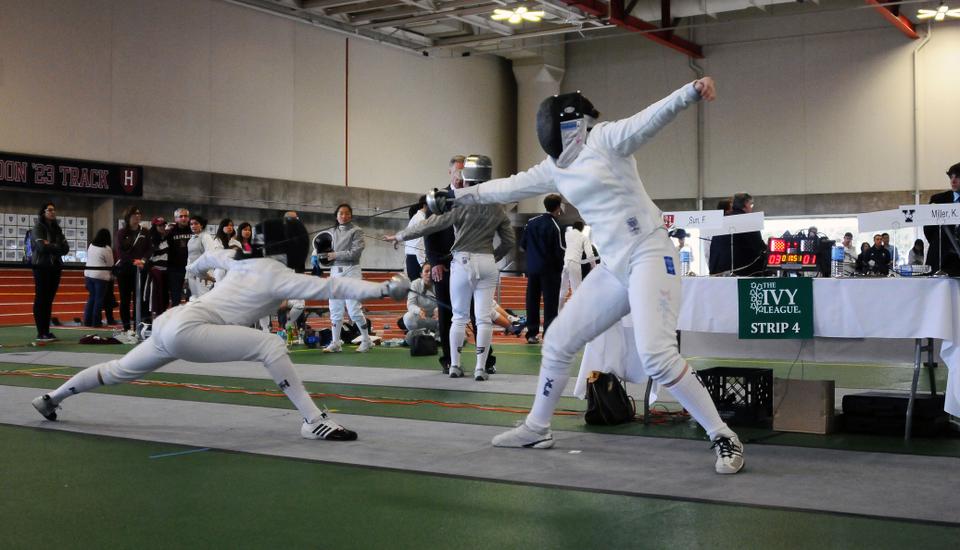 Brother took on brother in the final match of Ivy League Championships at the Gordon Indoor Track.

“It was just so close,” freshman Duncan O’Brien said. “That was probably the most exciting moment in sports I’ve ever experienced, and I’ve been a Boston sports fan my whole life.”

In the same tournament, the women’s team failed to come away with the win and finished third behind Princeton and Columbia.

The Crimson qualified 11 fencers for the NCAA Championships—one fewer than in 2012. Only sophomore epee fencer Peregrine Badger won an individual medal, picking up the bronze and first team All-American honors.

“I don’t know if it could have been much better individually,” Badger said. “All the tournaments I tried to peak for I did, so I’m very satisfied.”

Badger improved on his sixth-place 2012 finish, winning 17 of 23 qualifying bouts and facing future national champion Marco Canveri from Ohio State in the semifinals. Although he mounted a comeback at the end of the match, Badger could not overcome an early deficit and missed out on a spot in the championship round.

The men’s side picked up two more top-10 finishes in the foil but struggled in the epee and the saber, winning no more than 13 bouts in either event.

For the women, junior co-captain Alexandra Kiefer finished just out of medal contention after dropping a qualifying match to her younger sister Lee Kiefer, a freshman at Notre Dame, who went on to win the gold medal in the event.

“Our ultimate goal is to win NCAA championships,” Badger said. “We fell short this year, but I think that just leaves room for improvement next year.”

Both teams kicked off their season at the Garret Penn State Open where junior epee fencer Michael Raynis had the only first-place finish for the Crimson. Keifer led the women with a second-place finish in the foil.

At Vassar, both sides went 4-1 and again benefited from strong performances by Raynis and Keifer. Freshman Nina van Loon matched Keifer with a 14-1 record, and O’Brien, a walk-on, went 4-1 in his first collegiate competition.

“It was such a great decision to walk on,” O’Brien said. “I was immediately welcomed at the beginning of the year, and it’s such a small team and a close knit group of guys.”

Van Loon and O’Brien were part of a strong freshman class, which was key in a number of the Crimson’s victories. Freshman sabreur Aliya Itzkowitz placed 12th at NCAA championships and earned second team All-Ivy honors and an All-American honorable mention. Foilist and classmate Michael Woo was named to the All-Ivy first team after going 13-2 at Ivy League Championships and winning a bronze medal at NCAA Regionals.

“The freshmen are some of our top players,” Badger said. “They get very good in high school and have been traveling to World Cups since they were very young. They’re freshmen at Harvard, but they’re on an incredible upward trajectory in the world rankings.”

Though both teams would go on to make strong showings in the conference championships, they got of the season. Harvard travelled to Queens, New York to participate in the St. John’s Invitational to begin 2013 and went 1-4 overall. The women’s team failed to pick up a win against any of its first five opponents, even as Kiefer went 13-2 individually, the strongest Crimson performance.

With only one tournament left until the Ancient Eight championships, Harvard redeemed itself with three wins on each side in the Beanpot, sweeping MIT, Brandeis, and Boston College. Kiefer posted a perfect 9-0 record on the women’s side, and Michael Woo went undefeated on the men’s side.

Before the Crimson advanced to NCAA Championships, it returned to Queens to compete in regionals. Sophomore Brian Kaneshige won the gold medal in the foil—one of three for the men—and Kiefer and sophomore Emma Vaggo took home bronze medals in the foil and the epee, respectively. The women also earned a pair of top-ten finishes in the sabre competition.

Badger credited his captains, juniors Raynis and Lucas Lin, with creating a supportive atmosphere, which allowed the team to be more cohesive and competitive.

“The captains did a really good job of solidifying team culture and making the team a very fun experience,” Badger said.