Cranston Breaks Out in "All the Way" 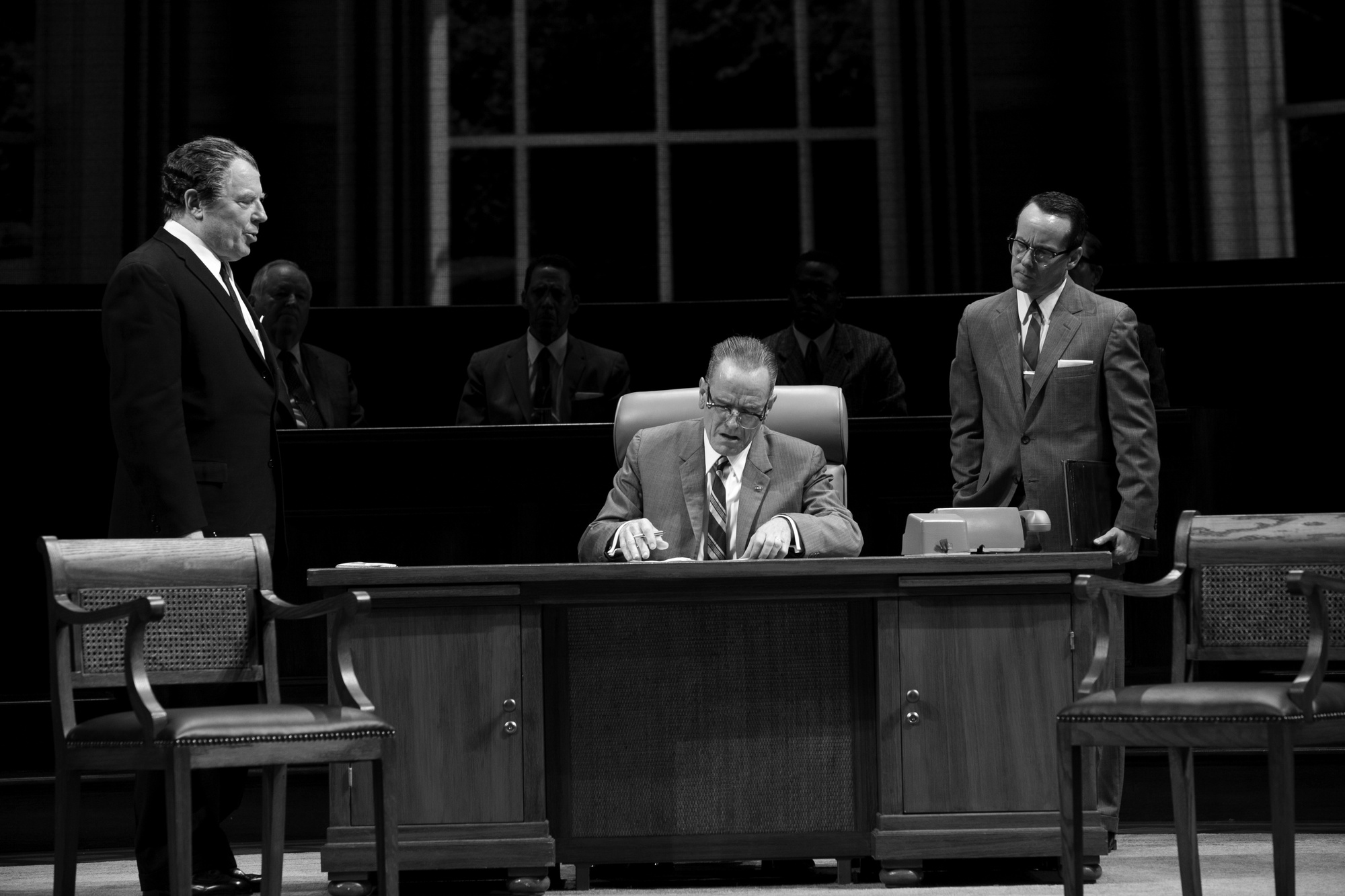 Lyndon B. Johnson (Bryan Cranston) makes decisions from his iconic desk chair in the ART's production of "All the Way."
By Emma R. Adler, Crimson Staff Writer

A sizable portion of the Harvard student population already spends a good amount of time with its eyes glued on Bryan Cranston. But if you can stand to tear yourself away from his pixelated image and accept standing-room-only tickets, the beloved star of “Breaking Bad” will make “All the Way” worth your while. The show, playing at the American Repertory Theater through October 12 and directed by Bill Rauch, chronicles Lyndon Johnson’s first year as president. The play provides a thoughtful, thorough treatment of a year in American politics, but it is Cranston’s wrecking ball of a performance as LBJ that earns it a “can’t miss” status.

The trajectory of “All the Way” is straightforward: act one charts the passage of the Civil Rights Act of 1964, act two focuses on LBJ’s quest to secure reelection. Closed cases? Emphatically so, but LBJ’s tortuous paths to victory are no less fascinating for our knowing how things will play out. “All the Way” manages to build suspense by focusing on the how instead of the why. The play plumbs the fraught circumstances that prefigured historical marquee moments, bringing to light nuances that are typically excluded from APUS History textbooks. It also interweaves various issues with an adroitness that hammers home how interconnected all political decisions are.

And yet, “All the Way” is an unabashed vehicle for Cranston. Cranston has the advantage of performing for an audience primed to adore him, but this luxury, far from making him complacent, seems to have bestowed a confidence that enables Cranston to attack his role with special fervor. He disappears into LBJ, adopting a cadence and a physicality that betray no whisper of Walter White, Cranston’s character on “Breaking Bad.” His Johnson is a veritable force of nature, a first rate wheeler-dealer, gifted storyteller, and indefatigable shape-shifter who plays the Southern good ol’ boy and the hardened politician with equal aplomb.

“What does Lyndon Johnson really want?” one associate, questioning LBJ’s loyalties, wonders aloud. It’s a difficult question to answer, but whatever he wants, he knows just how to get it. Cranston’s delivery changes with each friend, foe, and family member LBJ encounters, illustrating the president’s legendary ability to adapt to his audience. Yet Cranston is careful to retain a basic constancy of character that prevents his portrayal edging into the territory of lampoon. The audience is treated to a parade of distinctly flavored Johnsons, but they are all definitively LBJ. And when Johnson breaks the fourth wall, imparting snatches of political wisdom to the audience, Cranston’s gruffer tone and stalwart stare make blisteringly clear the ambition and cunning that are at the root of his protean nature. “You know how to win a campaign?” he snarls. “By not losing it.”

The other actors on stage are predictably pummeled by Cranston. But they take their annihilation in stride, delivering performances that are the theatrical equivalent of protein bars (plain but effective) and never once attempting to steal the show. One notable exception is Eric Lenox Abrams, playing an infuriated civil rights advocate who upstages Martin Luther King during a sermon. Abrams briefly takes over the play, with an electrifying and brilliantly acted speech in which he holds a microscope to LBJ’s civil rights failures and activates a solemn pulse that pounds, soft but steady, through the remainder of the play.

“All the Way” is further elevated by Christopher Acebo’s well-designed and cleverly utilized set. At the opening of act one, a large turquoise chair is framed by a semicircular amphitheater of congressional pews. Additional props shuttle onstage and off, but these key pieces remain for the duration of the play. The amphitheater is populated by an ever-changing coterie of observers who train critical eyes on LBJ. Johnson’s chair also serves a symbolic purpose; it remains even when Cranston is absent, alluding to the president’s political omniscience as well as, perhaps, to his inability to always make good on the promises he issues from it. When Martin Luther King (Brandon J. Dirden) occupies the chair during a scene that deals with the president’s imperfect allegiance to the Civil Rights Movement, Johnson’s failures in this arena are made clear.

“All the Way” clocks in at just over three hours, but excepting a lugubrious final lap heavy with exposition and short on shining moments for Cranston, this is a play that makes you feel time is no object. Those willing to stand (or sneak in a Crazy Creek) will find themselves standing just a little longer after the show to give “All the Way” the upright ovation it deserves.

—Staff writer Emma R. Adler can be reached at emma.adler@thecrimson.com.