Cabot Residents Praise Their House Master, The Next Dean of the College 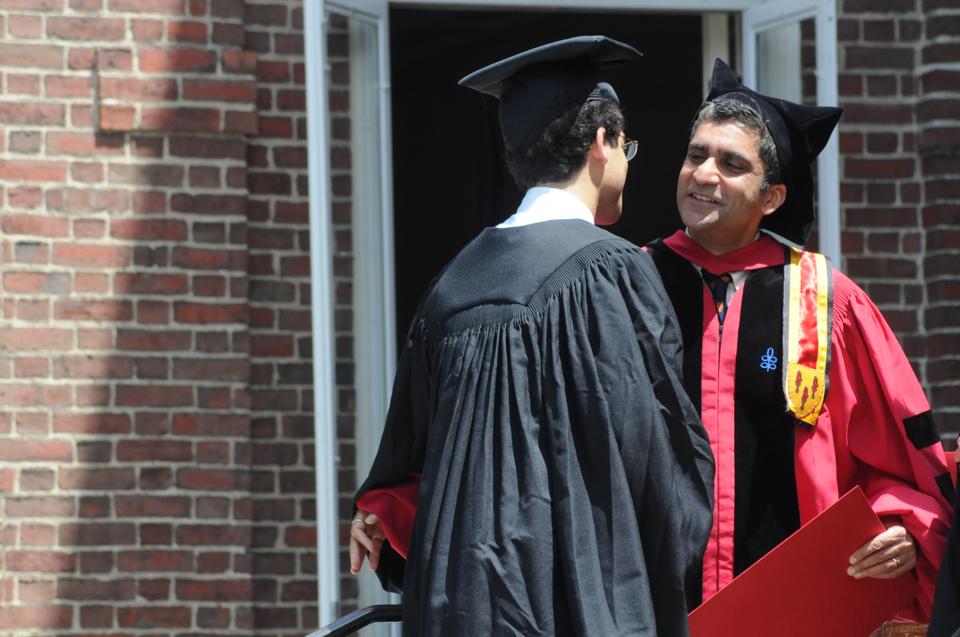 Cabot House co-master Rakesh Khurana, who will become Dean of the College on July 1, is pictured greeting a graduating senior during 2012 Commencement.
By Noah J. Delwiche and John P. Finnegan, Crimson Staff Writers

College students and Cabot House residents in particular expressed enthusiasm, support, and optimism for Rakesh Khurana Wednesday afternoon, hours after the Cabot co-master was named the next dean of Harvard College.

“I was ecstatic,” said Emily C. Lowe ’14, a resident of Cabot, where Khurana and his wife, Stephanie R. Khurana, have served as co-masters since 2010.

Lowe was not alone in her excitement.

“Rakesh is the man,” said Bryan Li ’15, another Cabot resident and a Crimson multimedia editor.

“He has our full confidence,” said Adam J. Joseph ’15, a psychology concentrator in the House. “I think that Harvard College is in good hands, and that Rakesh has been an excellent House Master.”

The appointment, news of which came in an email from Dean of the Faculty of Arts and Sciences Michael D. Smith around 1 p.m., will make Khurana the third dean of the College in a little over a year. Though preceded by Interim Dean Donald H. Pfister, Khurana will be the permanent replacement for Evelynn M. Hammonds, who resigned the University Hall post after 5 years last summer.

A number of students interviewed Wednesday expressed confidence that Khurana would bring positive change to the deanship, bringing the College administration—thought by many to have been aloof under Hammonds—closer to the student body.

“We knew Evelynn Hammonds was dean of the College, but I don’t think I saw her other than Convocation freshman year,” Lowe said. “With the way I’ve seen Rakesh approach being House master, I think not only will the dean of the College be more visible but also be more approachable at the same time.”

Former Undergraduate Council President Tara Raghuveer '14, who worked closely with both Hammonds and Pfister during her tenure, said that she is "extremely excited” about the appointment.

Khurana "understands and empathizes with the student body,” she said, and has been "willing to engage with undergraduates."

“I think that there will definitely be a different flavor around,” said Kat M. Baus ’15, who transferred to Currier this year from Cabot. “It does change the sort of character of the school and how students view the administration’s personality.”

Many Cabot residents offered praise for their House master, who will stay on after he takes office on July 1, saying that Khurana had fostered a sense of community within Cabot and would surely thrive in his new position.

“I don’t think it will take away too much from Rakesh’s ability to know how the students are doing and really be personally invested in Cabot,” Kent W. Toland ’14 said. “It’s just so evident that he really cares; he and Stephanie both really care about the students here, and I’m sure that won’t change.”

Toland said that Khurana demonstrated his dedication last year when he personally drove Toland to Inman Square to pick up T-shirts for the Cabot House Musical last year.

“One of my big things that I’ve been involved in here is theater and the Cabot House Musical, and I appreciate how Rakesh and Stephanie don’t just take a back seat in supporting it; they’re very much involved,” he said.

Still, other undergraduates remained less convinced of the importance of the College deanship. Indeed, during the search process last fall, few students attended a series of discussions held by the search committee.

“I feel like it doesn’t really affect my life on campus that much” Kasina Euchukanonchai ’15 said.

Khurana himself was not on campus Wednesday. He was in Davos, Switzerland when the announcement was made, leading a panel at the World Economic Forum.

—Staff writer Noah J. Delwiche can be reached at ndelwiche@college.harvard.edu.