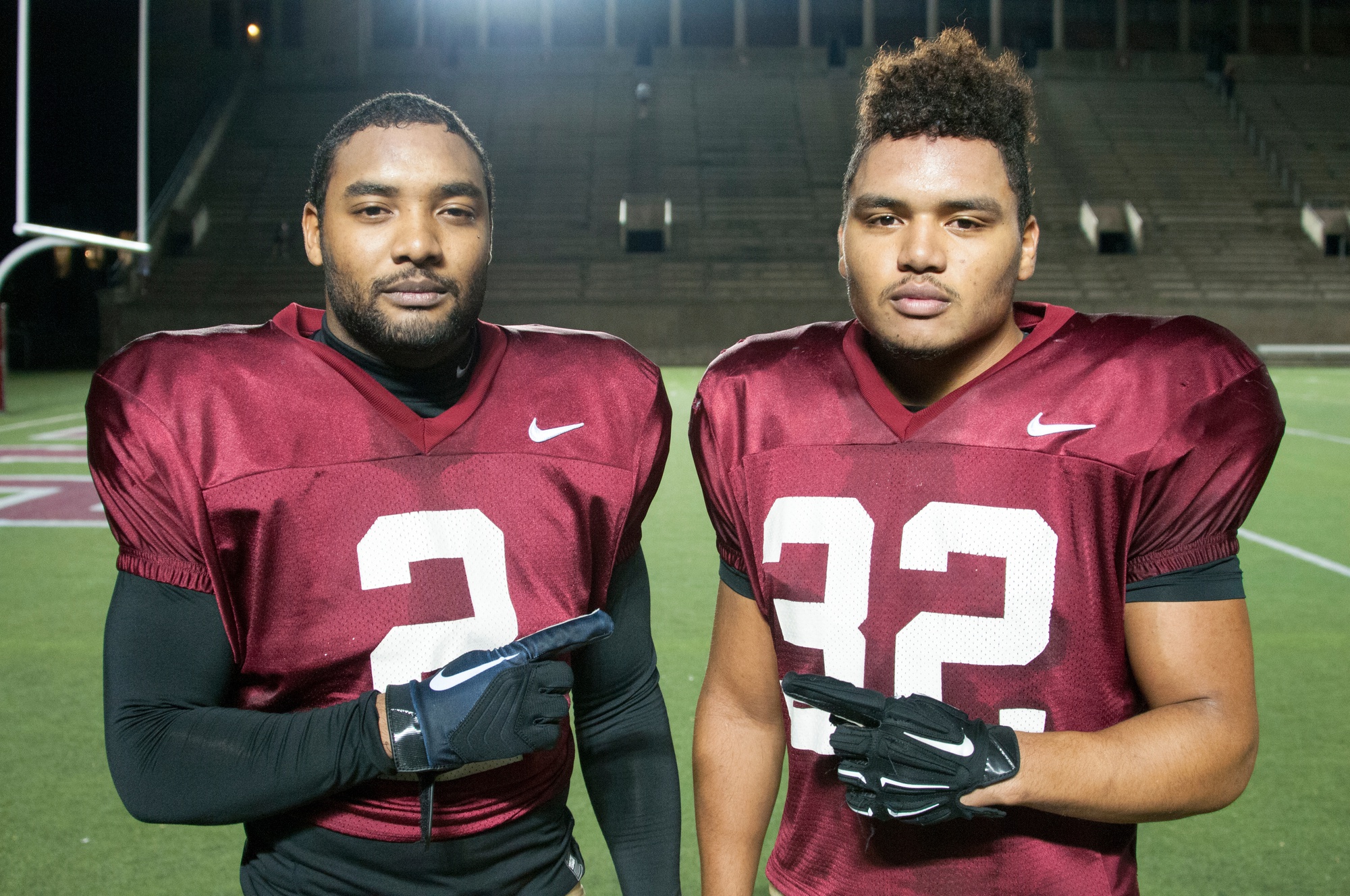 The Smith brothers always knew they wanted to play football. Now, for the first time, they are able to do so together.
By Samantha Lin, Crimson Staff Writer

For many football players at Harvard, this is a typical summer regime. And for two brothers, who now both wear the Crimson jersey, it’s one that they’ve followed together—for the past 14 years.

The path to football was always clear for senior Seitu Smith II and freshman Semar Smith, but the road to Harvard wasn’t necessarily so.

From the time Seitu was eight and Semar was five, they began playing tackle football. The sport is in their blood—their dad was a wideout at Division III Lakeland College, and took them to nearby hills in their home state of Florida to begin teaching them how to run routes.

“Seitu seemed like he wanted to play football from the womb,” said Mari Smith, Seitu and Semar’s mother. “He kind of idolized my husband and always wanted to do whatever it is he was doing.”

Semar followed in his brother’s footsteps, tagging along to Seitu’s training sessions while the older brother became more serious about football. All the training paid off when Seitu, who captained the Deerfield Beach High School team, was named a Top-100 football player in South Florida.

The elder Smith brother began considering schools that were “probably higher in [football] ranking” than Harvard, schools like the University of Michigan and the University of Alabama. But Mari Smith had a different path in mind for her son.

“Coming from a third-world country—I was born and raised in the Philippines—I’m all about education, so to me, it was a no-brainer that Harvard was the school for [Seitu],” she said. “I told him [that] if you break your leg at Harvard, no one can take that degree away from you.”

Mari left the decision up to her son, and had no reason to worry. When Seitu met Tony Reno, then an assistant coach at Harvard, now head coach at Yale, his decision was made. Reno’s move to New Haven in Jan. 2012 made Semar’s college decision a little more difficult, as both Seitu and his mother’s strongest tie to Harvard during the elder Smith’s recruiting process was through Reno.

Semar and Seitu—despite growing up and training together every day—had never taken the field together. In Seitu’s final year at Deerfield, the younger brother was moved to the varsity level, but only to the practice squad. After Seitu’s graduation, Semar moved to Broward Prep to be closer to home, and the Smith brothers still had yet to play for the same offense.

And so just as with the decision to play football, Semar, heavily recruited by Harvard coach Tim Murphy, followed his brother’s path once more—this time to Cambridge, where he would have the opportunity to have his brother as a teammate, rather than a rival.

“[Reno’s move to Yale] made me look towards Yale more [than] if he hadn’t have gone there,” Semar said. “But in a way, we wanted to play together…. I knew if I was able to get into both, I’d choose Harvard over Yale or any of the other Ivy League schools.”

Semar—the Crimson’s top running back recruit of the year—did end up choosing Harvard, and now the rookie is solidly part of the running back corps for the Crimson.

Seitu scored his first collegiate touchdown during the 2011 Freshmen Parent’s Weekend matchup against Bucknell, when he returned a kickoff 91 yards, en route to a promising rookie season in which he averaged nearly 30 yards per kick return.

Three years later, during the 2014 Freshmen Parent’s Weekend game against Columbia, Seitu—now a senior—caught a 22-yard scoring pass. A few plays later, rookie Semar barreled into the end zone from three yards out to get his own first collegiate touchdown, marking the first time in the Murphy era that two brothers scored a touchdown for Harvard in the same game.

“It just gave me goosebumps again to reminisce on that,” Mari said. “My husband and I both said we couldn’t believe it. We wanted that to happen, we didn’t think that would happen during Semar’s freshman year.”

And in a season that has seen both starting running backs go down with injury for parts of the season, the freshman has enjoyed an especially productive inaugural campaign, just like his brother. Semar has had two 100-plus yard rushing games this year thus far, and has become a part of the running back corps that rotates him with junior Paul Stanton and senior Andrew Casten.

“Relative to their positions, they were great athletes when they got here,” Murphy said. “Seitu was an explosive kid that could play running back or receiver, and was a fixture in the kicking game from the beginning. In Semar’s case…[he was] just so natural. Great vision, great feet, very physical, so it’s all about recruiting.”

Much of their athleticism and football intuition can likely be attributed to their father’s dedication to their training when they were kids. Thus, the road to playing football at Harvard for both brothers was perhaps not so unlikely. The determination of the Smith family reflects the “never give up” nature of the Harvard football program, a mantra instilled from the very beginning, when Murphy writes it in his letter to players following their commitment.

Even though Seitu is a senior, he will take his fifth year of eligibility and not give on his dream of playing for the NFL. As a result, he will have an extra year of playing time with Semar. And if Seitu dons a pro jersey in the future? His little brother just might follow him there, too.

“If his brother does it, [Semar] definitely will,” Mari said.