Panel Takes on Threats to Humanity 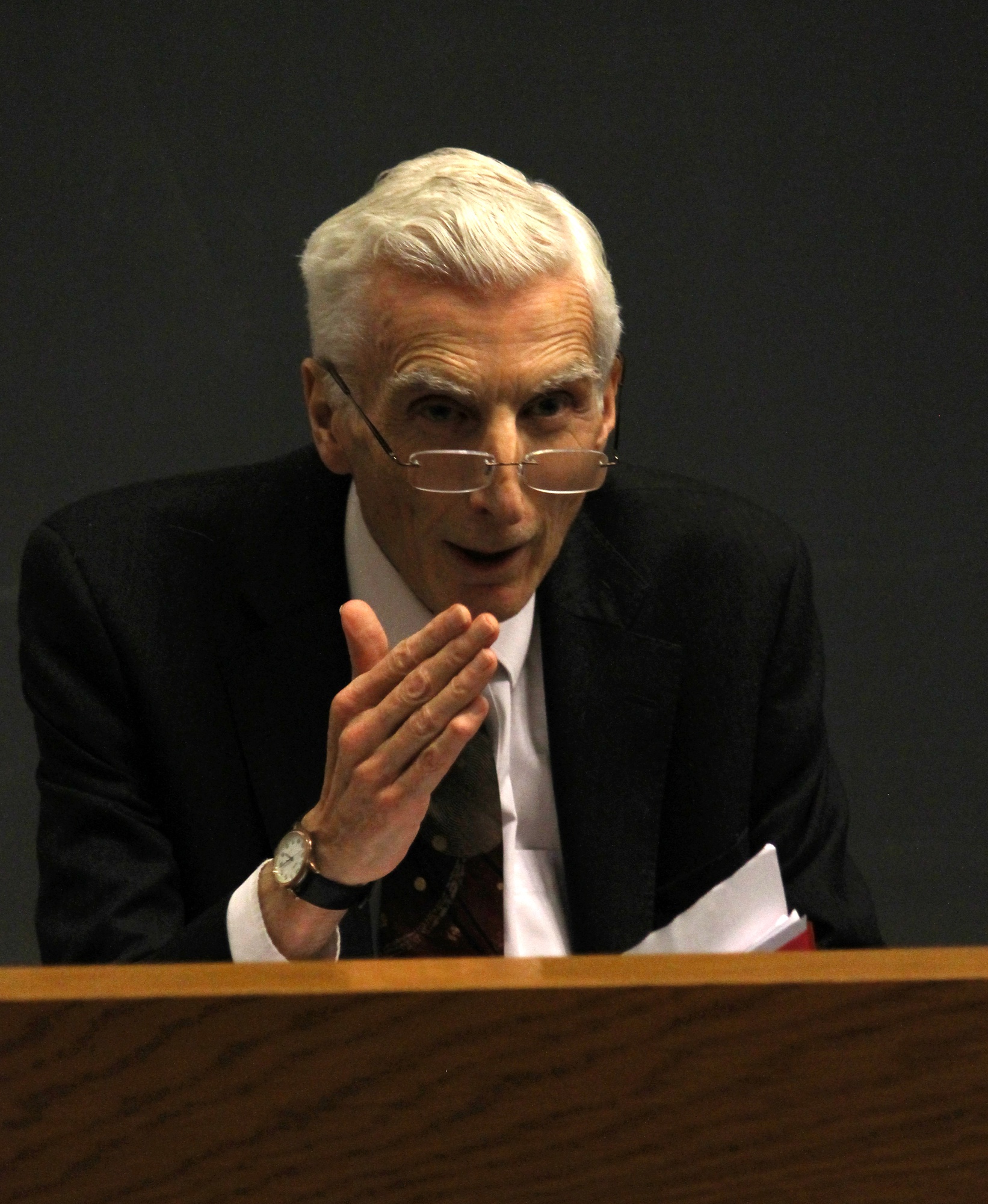 Martin Rees, professor at the University of Cambridge and Astronomer Royal, speaks about the history of technology advances at the Science & Democracy lecture on Thursday evening in Jefferson Laboratory.
By Samuel Vasquez, Contributing Writer

A self-inflicted global crisis is a far greater hazard to human existence than any natural catastrophe, according to Martin J. Rees, a professor at the University of Cambridge who gave a lecture Thursday afternoon at the Kennedy School of Government.

Rees, alongside a panel organized by the Program for Science, Technology, and Society, discussed the variety of possible causes of an “existential crisis” for humanity, through the lenses of various disciplines. 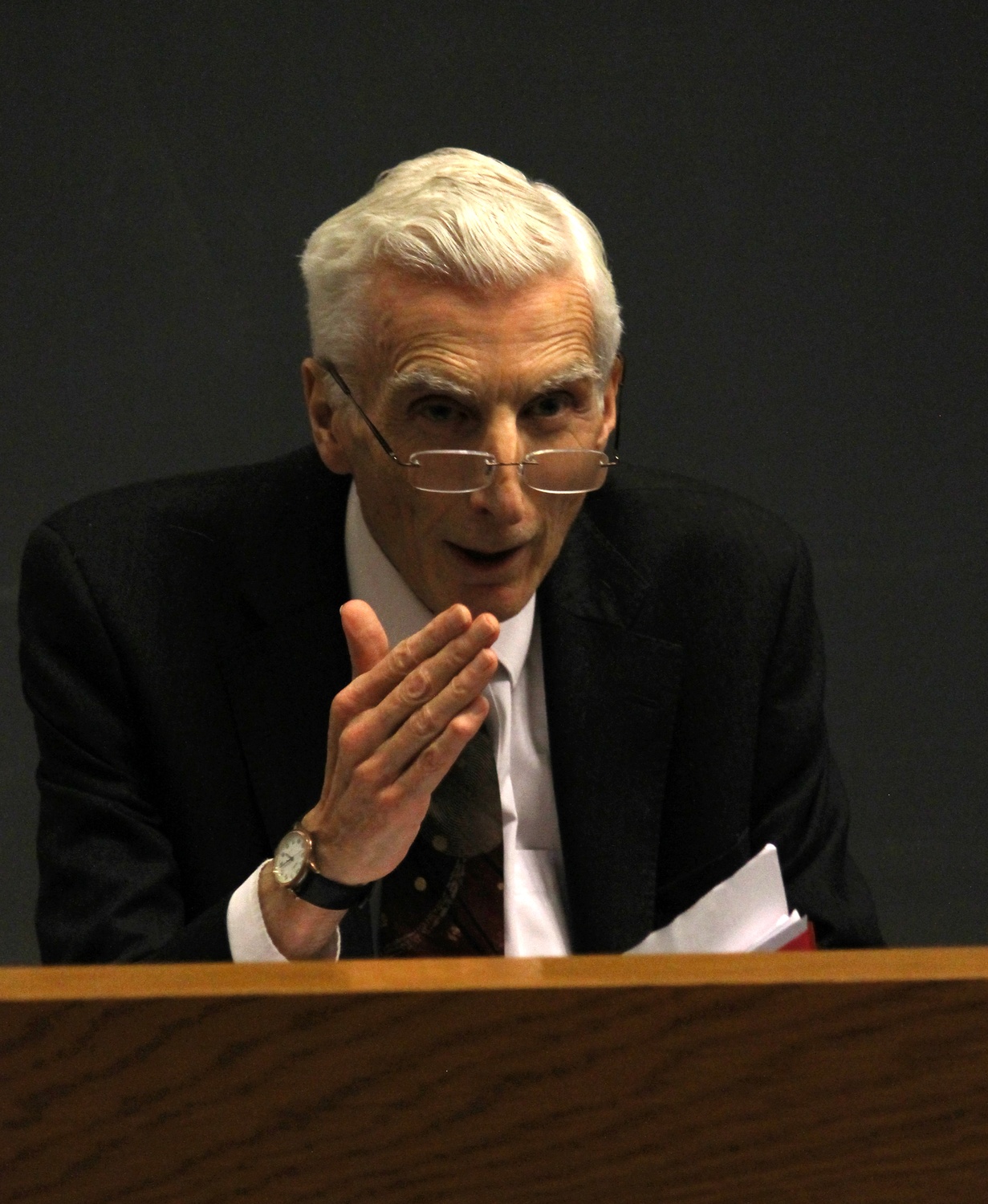 Martin Rees, professor at the University of Cambridge and Astronomer Royal, speaks about the history of technology advances at the Science & Democracy lecture on Thursday evening in Jefferson Laboratory. By Jennifer Y Yao

“We just don’t know the boundary of what may happen and what will remain science fiction,” Rees said. He went on to stress that “existential crises deserve more attention even though they are unlikely.”

Additionally, he said that the probability of a wide-scale disaster is not as small as many believe, quoting the maxim, “the unfamiliar is not the same as the impossible.”

The discussion then turned to what may be done to address these catastrophic possibilities. Rees spoke to how political actors have a limited scope for action in such cases, citing climate change as an example.

“All these issues are widely discussed; what’s depressing is the inaction. For politicians, the immediate trumps the long term, the parochial trumps the global,” Rees said.

Jennifer Hochschild, Harvard College professor of Government and a member of the panel, described how partisan politics plays a role in the response to these potential disasters. Although once not a source of political contention, scientific and technological advances, Hochschild argued, have become a partisan matter.

Hochschild said that the political dimension of catastrophes is not as clear cut as liberal and conservative. She said that a democratic system encourages politicians to focus on garnering the support of constituents, and so “the right policy is the one that gets 50 percent plus one of the vote,” regardless of political affiliation.

Linn W. Hobbs, a member of the audience and a professor of Material Science and Nuclear Engineering at MIT, pointed out that human ingenuity is crucial to our survival as a species, an element of human culture that other panelists had not touched on. While the panel was thorough with the different disciplines represented, Hobbs said that he wished an anthropological perspective was present at the talk.

Rees stressed that people should not only consider the present needs of humanity but also the welfare of future generations.

“[We] should care as much about those in the 22nd century and beyond as those that are alive now,” Rees said.

An earlier version of this article incorrectly identified the gender of MIT Material Science and Nuclear Engineering professor Linn W. Hobbs. In fact, Hobbs is a man.