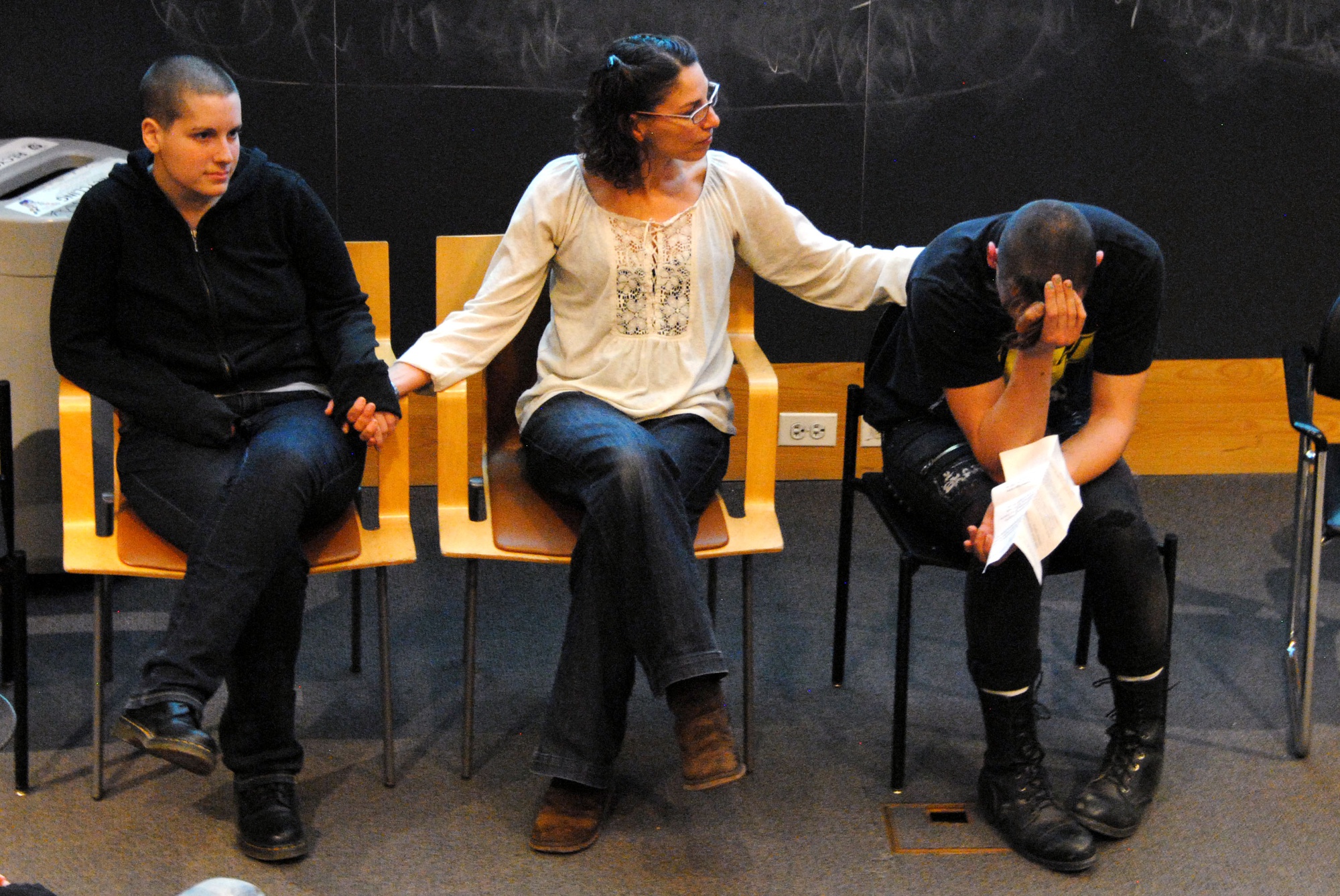 From left, Max, Ayala Livney, program manager for Youth On Fire, and Skyler listen emotionally to their friend Alec as he speaks to a packed Fong Auditorium on March 3. Being homeless for years, Max, Skyler, and Alec told their stories and spoke about the importance of Youth On Fire and youth homeless shelters.
By Sonali Y. Salgado and Caroline T. Zhang, Crimson Staff Writers 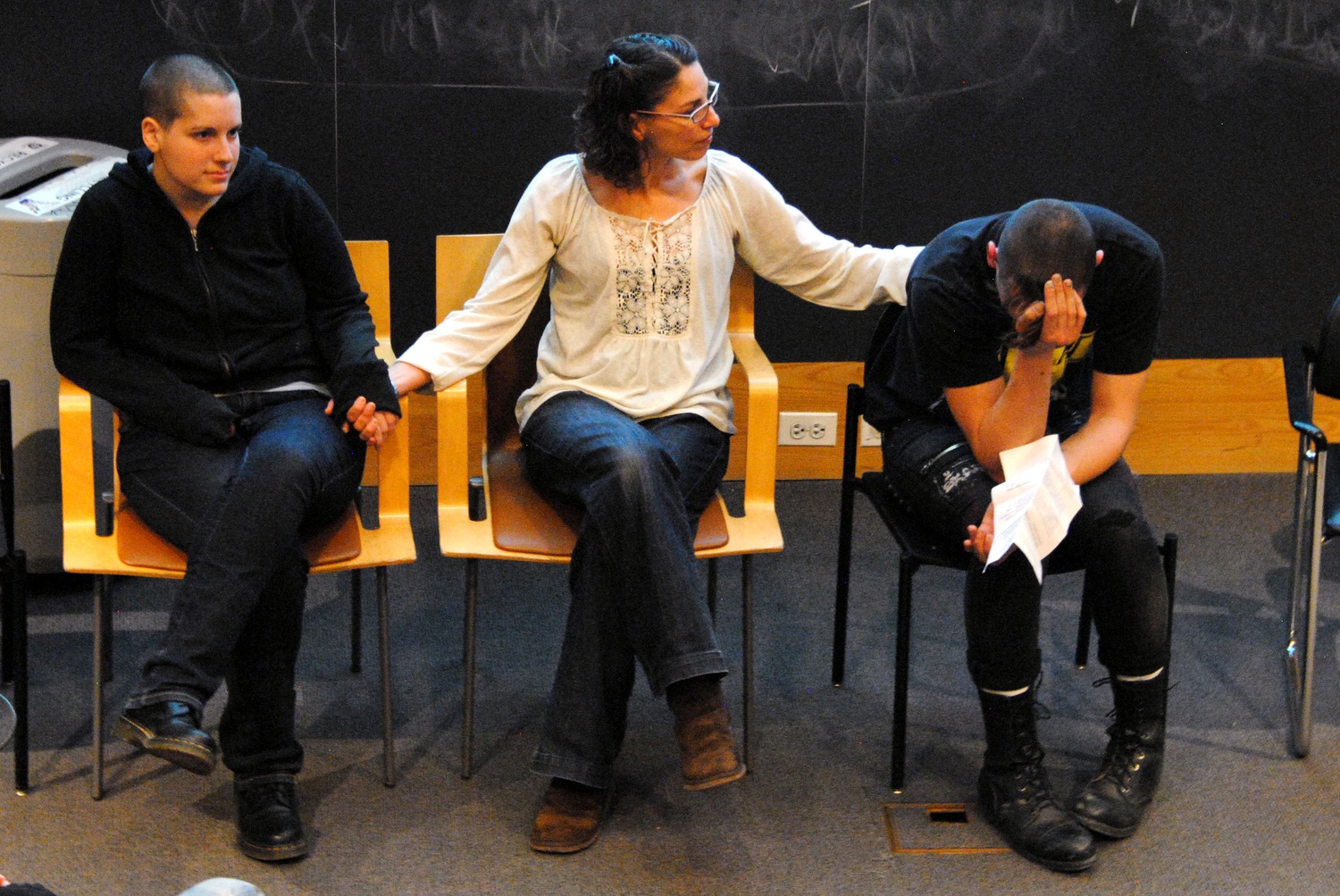 From left, Max, Ayala Livney, program manager for Youth On Fire, and Skyler listen emotionally to their friend Alec as he speaks to a packed Fong Auditorium on March 3. Being homeless for years, Max, Skyler, and Alec told their stories and spoke about the importance of Youth On Fire and youth homeless shelters. By Tiana A Abdulmassih

Samuel G. Greenberg ’14 and Sarah A. Rosenkrantz ’14, co-directors of the the Harvard Square Homeless Shelter’s Youth Initiative, appealed to the Harvard community Monday night for support in their campaign to open a youth homeless shelter in Harvard Square within the year.

Calling their campaign “1000 Nights,” Greenberg and Rosenkrantz told a crowd gathered at a fundraising and outreach event in the Fong Auditorium that they hope to raise enough money for 1000 nights worth of housing, food, and case management services for the new shelter.

Targeted to open in Feb. 2015, the youth shelter would share its space with Youth on Fire, a Cambridge-based non-profit that provides daytime drop-in services—ranging from hot meals to peer counseling—to youth ages 24 and under.

Ayala Livny, program manager of Youth of Fire, spoke to the need for linking Youth on Fire’s daytime services with an overnight shelter.

“Sometimes it feels like what we’re doing is a band-aid,” Livny said of Youth on Fire. “We provide some really important support and services, but when we close at 6, our members have to walk back out in the cold.”

Livny also said that a loss of funding for Youth on Fire adds urgency to the partnership. She explained that the program is slated to downsize in April of this year, cutting drop-in services and relocating from their location near the Law School to Central Square.

“We’re losing our home and getting an office,” Livny said. If the group the were to join the proposed shelter, it would be able to resume providing its current services at Harvard by next February, when supporters hope to open the new shelter.

The event, which lasted an hour and a half, featured homeless youth who spoke about the need for a safe place to sleep for people their age. The danger of victimization, the speakers said, extended beyond the streets.

Brandeis was one of the Youth on Fire members featured in the documentary “No Place Like Home,” which was shown at the event. In the documentary, she said that homeless youth sometimes seek out arrest in order to get “three hots and a cot.”

At the end of the evening, HSHS Youth Shelter volunteers invited the audience to donate money to the ‘1000 Nights’ Campaign or to appeal to the Massachusetts state legislature for added funding for youth homelessness services.

HSHS has already raised $60,000, which it will put toward supporting the new shelter. Organizers said that they estimate a new shelter would cost roughly $70,000 a year to operate based on the current cost of running the current shelter.

In the coming months, the youth shelter organizers said they will finalize a location for the shelter and work with youth to develop policies for the shelter.