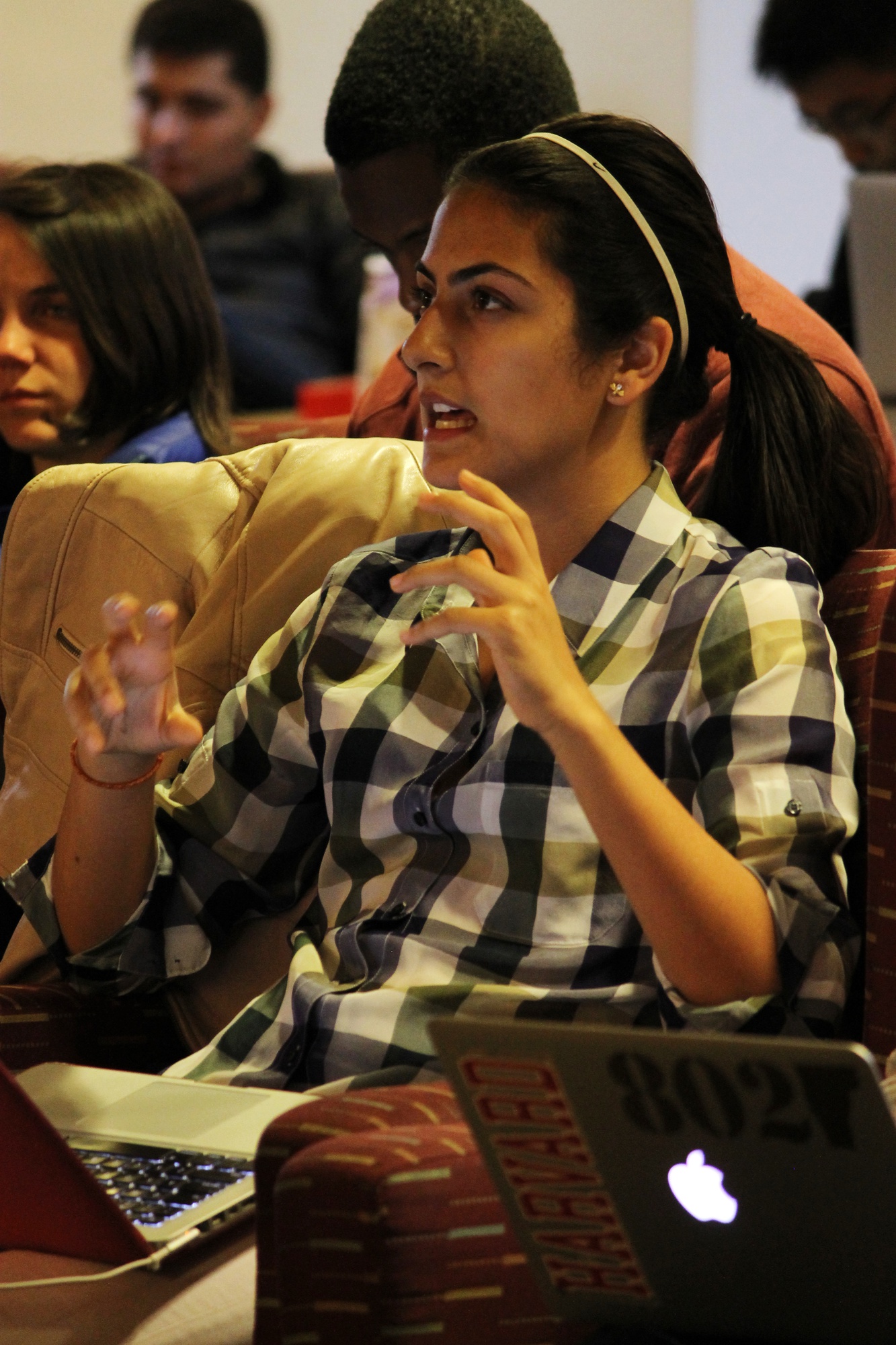 Ava Nasrollahzadeh '16 poses a question about HBX at the UC meeting on Sunday night in Ticknor Lounge. Nasrollahzadeh, UC chair of Student Relations, later presented the launch of the new UC website during the meeting.
By Noah J. Delwiche, Crimson Staff Writer

Members of the Undergraduate Council approved a paid partnership with the Harvard Business School’s new online platform HBX and announced the launch of the Council’s new website at their general meeting Sunday. 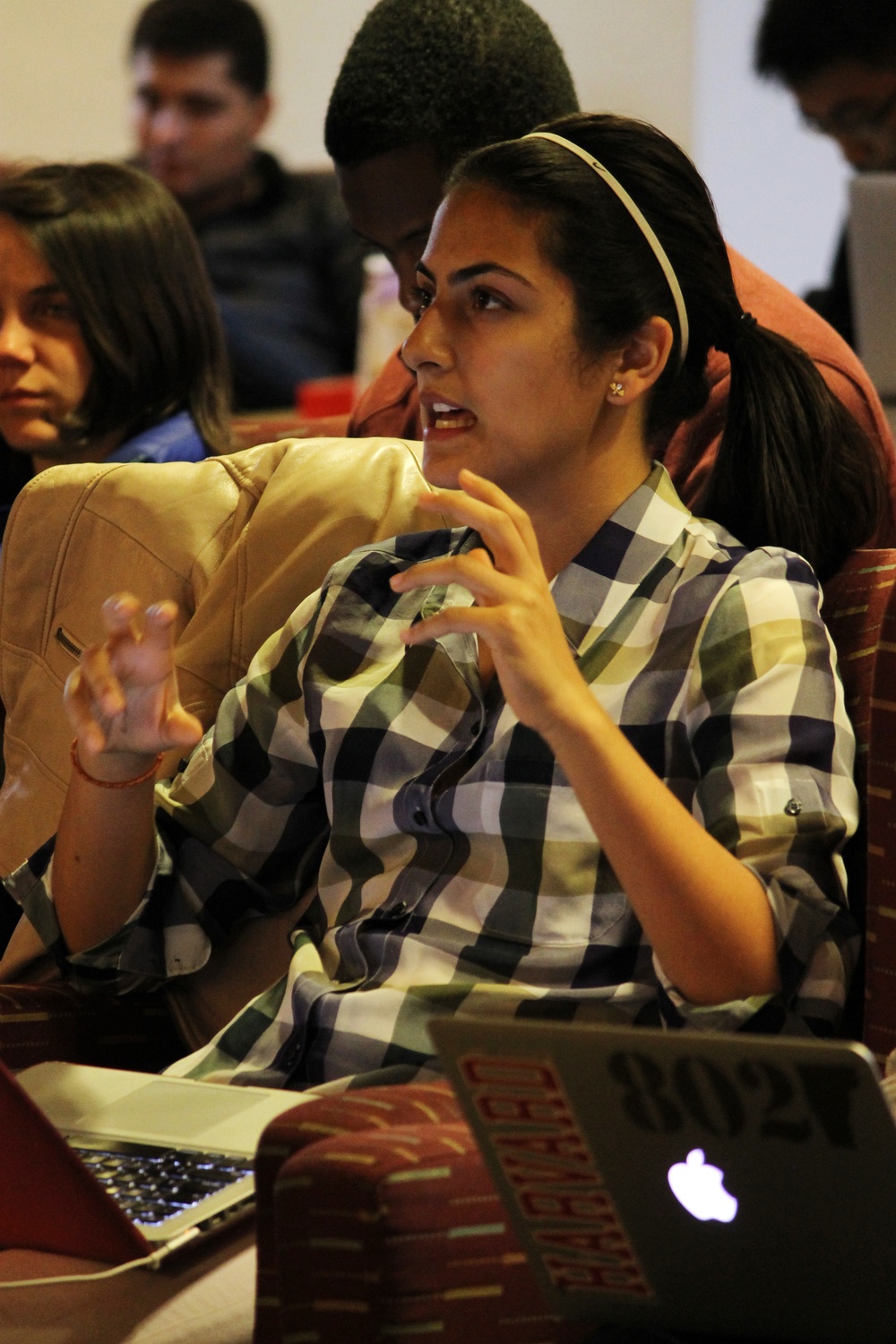 Ava Nasrollahzadeh '16 poses a question about HBX at the UC meeting on Sunday night in Ticknor Lounge. Nasrollahzadeh, UC chair of Student Relations, later presented the launch of the new UC website during the meeting. By Jennifer Y Yao

“This is a great means of creating another source of revenue for the UC while at the same time providing a service to campus which is something that students universally can take advantage of,” Dhruv P. Goyal ’16, chair of the UC Education committee, said after the meeting.

The contract stipulates that the UC will receive at least $1,500 in compensation for its first year and a minimum of $3,000 for the following year.

Goyal insisted that the HBX contract secured by his committee, while indicative of financial concerns faced by the UC, does not require the Council to approve any other partnerships in the future.

“It’s not just anybody that can come and ask us for publicity in exchange for a fee,” Goyal said, emphasizing the affiliation of HBX and its purported applicability to undergraduates.

The UC also publicized the official launch of its new website, which Student Relations Committee Chair Ava Nasrollahzadeh '16 said will be more “interactive,” “useful for students,” and “current.”

The launch comes after months of delays and a goal advanced by UC President Gus A. Mayopoulos ’15 to launch the site by the beginning of the Spring term.

Nasrollahzadeh attributed the slowed rollout to several problems, including the difficulty of maintaining a web designer and the time required to produce new content for the site.

Still, Nasrollahzadeh praised ways she said the new site will facilitate better interaction between the Council and students by incorporating polls, pictures, and comedic elements.

“We are figuring out how to connect in a better and more relevant way to the students,” she said.

The UC meeting also featured an update to the Council’s attendance policies. Just this February, the Council revised its bylaws, subjecting representatives who miss three or more meetings to a review, instead of immediate expulsion from the Council.

Under the revisions approved Sunday, a member under review will be expelled from the Council if the majority of the Executive Committee votes in favor of such a dismissal. Previously, a two-thirds majority vote was required to mandate an expulsion.

The meeting also included Oak Yard Representative Luke R. Heine’s  '17 pitch for his Spring clothing donations drive for Freshmen that he has dubbed the “Take Your Clothes Off” campaign.

The Council additionally approved a wave of legislation to allocate money to the various initiatives of the Student Initiatives Committee and the Freshman Class Committee.