Kate Sim ‘14, left, and Pearl Bhatnagar ‘14, right, with other members of the group Our Harvard Can Do Better discuss Title IX and its implementation at Harvard in April.
By Noah J. Delwiche and Brianna D. MacGregor, Crimson Staff Writers

As the current president of Consent, Assault Awareness and Relationship Educators, and someone directly involved in teaching a sexual assault workshop to incoming freshmen, Demetrio D. Anaya ’15 is well-acquainted with what he believes are deep-rooted misconceptions about sexual violence held by his peers.

This difficulty is indicative of a larger problem. Even as Harvard appears to stand on the cusp of changes to its sexual assault policies—University President Drew G. Faust said in April that the University has submitted a revised policy to the Department of Education’s Office for Civil Rights—activists and administrators alike say that the next hurdle, which is related but perhaps more daunting, is changing a culture that propagates the normalcy of sexual violence and mistreatment of its victims.

In early May, the U.S. Department of Education released the names of 55 colleges and universities across the country, including Harvard, facing federal investigation for failure to comply with Title IX regulations. The announcement came weeks after students at the College submitted a complaint regarding Title IX compliance to the OCR at the Department of Education and four years after federal officials began investigating Harvard Law School for another complaint, a process that is still ongoing.

"[Legal] obligations should not alone define Harvard's commitment to providing an educational environment in which all students have the opportunity to thrive," University President Drew G. Faust said.

Across the University, student activists, such as those involved in Our Harvard Can Do Better, a survivor-centric organization that aims to dismantle rape culture on campus, have pointed to the inclusion of affirmative consent, the standard of evidence used in sexual assault cases, and the standardization of procedure across schools as policy changes the University could enact to comply with Title IX while improving sexual assault response and prevention.

A similar conversation has attracted attention on a national scale, culminating in the formation of the White House Task Force to Protect Students From Sexual Assault and public condemnation of its prevalence on campuses from President Barack Obama, Vice President Joe Biden, and other high-profile politicians and celebrities. In late April, the OCR released a 53-page document on handling Title IX complaints.

That document suggested, among other changes to its policy, that Harvard should replace its current “sufficient persuasion” burden of proof in Administrative Board cases to a “preponderance of the evidence” standard, believed by some to be a lower burden of proof than the standard Harvard current uses.

That discrepancy between Harvard’s policy and what activists see as obvious improvements has provoked outrage, mirrored on other campuses, in a number of forms. Just this year, Our Harvard Can Do Better representatives protested and held signs, including one which read “My friend’s rapist goes to class with me,” as prospective students walked by during Visitas, the College’s admitted students preview weekend.

When University President Drew G. Faust announced the creation of a task force in many ways designed to galvanize a cultural awareness shift, she made clear abiding by governmental regulations is not the only thing at stake.

The recommendations of the task force, which Faust accepted in mid-May, suggested more prevention training during freshmen orientations, increased funding for the Office of Sexual Assault Prevention and Response, and funds for a campus climate survey.

“[Legal] obligations should not alone define Harvard’s commitment to providing an educational environment in which all students have the opportunity to thrive,” Faust wrote at the time of the task force’s creation.

“Policy is great for policy's sake, but we need to be thinking about...how we can make our community safer and make it clear to everyone in the community that these are our beliefs and this is the kind of community we want to live in,” said Anaya, who is also a member of the sexual assault task force convened by Faust in April. 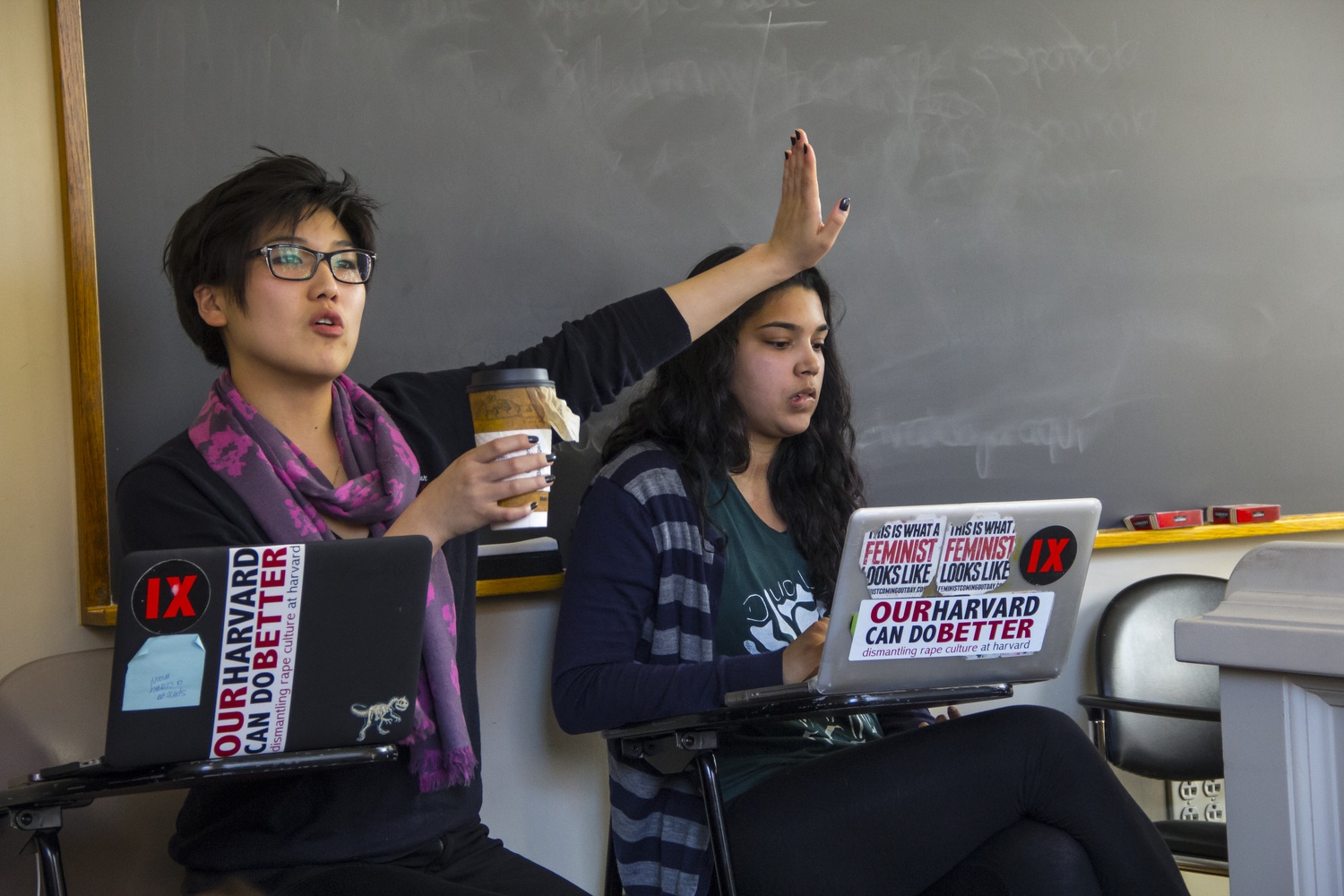 Kate Sim ‘14, left, and Pearl Bhatnagar ‘14, right, with other members of the group Our Harvard Can Do Better discuss Title IX and its implementation at Harvard in April. By Zorigoo Tugsbayar

Emily M. Fox-Penner ’17, a lead complainant on the complaint filed by undergraduates in April, and other activists agree and add that the University should do more to effect change in that culture than they do now. In other words, she said that policy and culture are “mutually reinforcing.”

For example, recommendations by University officials and police that students walk carefully or wear certain clothing—suggestions that would more broadly be characterized as risk reduction factors—can place undue responsibility on victims, Fox-Penner said.

Alicia Oeser, director of OSAPR, notes that there is “definitely” a culture of victim blaming at Harvard and nationwide.

Although Anaya agrees that it is important for schools to redress their policies, he likewise said that the broader conversation about the culture behind sexual assault will require more than policy changes.

Jack C. Smith ’15 first heard about Harvard Men Against Rape, a subdivision of OSAPR, from upperclassmen members of Sigma Chi when he rushed the fraternity in the fall of his freshman year.

Through his experiences as a member of HMAR, a group that aims to foster an open dialogue among males about sexual violence and how it affects their own lives, Smith said he has realized the importance of male involvement in changing the culture around sexual violence.

“The ‘culture problem’ as I see it can best be summed up by the fact that, although we know that a very small number of men commit the vast majority of rapes on campuses, they still largely act with impunity,” Smith wrote in an email.

Organizers from Our Harvard Can Do Better emphasize the power dynamics at play in exclusive social spaces such as final clubs, saying that regardless of where students choose to go on campus, they have the right to be safe.

Despite attempts to contact all presidents of male final clubs, each either declined to comment or was unreachable.

"The most common thing to come up in my role as a tutor is just issues of blurred boundaries," Winthrop House Tutor Jennifer Sheehy-Skeffington said.

Sharon L. Howell, outgoing resident dean of Adams House, said that the power dynamics at play on campus mirror the “larger culture” in which Harvard is embedded.

“I think it’s disappointing that there is still so much power imbalance in the social scene,” she said. “As someone who deals with student issues regularly, that’s very clear to me.”

And while groups such as Our Harvard Can Do Better, CAARE, and OSAPR bring up these common overarching themes as concerns when dealing with sexual assault, some say that a wide range of cultural forces that often have little or nothing to do with alcohol and social clubs factor into this situation.

Jennifer A. Sheehy-Skeffington, a Sexual Assault and Sexual Harassment tutor in Winthrop House, pointed out the danger in isolating the different factors contributing to sexual violence. She said that, in her own experience as a SASH tutor, issues involving sexual assault combined with alcohol use or Harvard’s social scene do not typically come up.

“The most common thing to come up in my role as a tutor is just issues of blurred boundaries and the legitimacy of feeling uncomfortable about something that doesn't necessarily fit a category of sexual assault or sexual harassment,” Sheehy-Skeffington said.

The complications she described point to the continuing difficulties in dealing with what she described as a “continuum” of cultural factors, a problem that many are combating by increasing awareness.

Earlier this May, Winthrop SASH tutors took over their house's dining hall during dinner and passed out a survey asking students to report expectations they had about their own social lives. Included were questions ranging from opinions on the definition of “sleazy” to the number of sexual partners a student would like him or herself to have had before finding a lifelong partner.

“For that whole dinner, everyone was discussing all of these issues and debating them,” Sheehy-Skeffington said. “The aim was less to see the results and gather information than to start those conversations.”

Through these discussions, peer counselors and faculty and staff members involved in sexual assault awareness hope to educate members of the Harvard community about the cultural components of attitude toward sexual assault.

With regard to education, Anaya emphasized two main solutions: changing the casual way we use language associated with sexual violence and employing the practice of bystander intervention as a community.

“Once you get the ball rolling, this is a topic that people quickly realize is something that they can be a part of changing,” Anaya said. 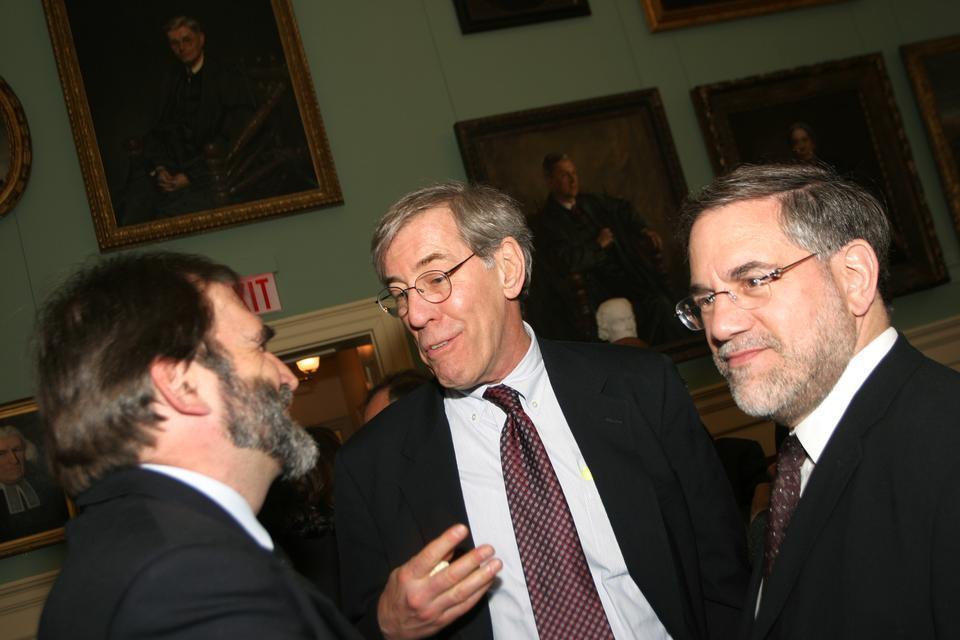 Even the people tasked with advising students may not be aware of best practices, Sheehy-Skeffington explained.

“My experience, and anecdotally, is that people will come [and] talk to the tutor that they know best about these issues, and that won’t necessarily be the SASH tutor,” she said. “ The tutor they talk to needs to be trained in how to respond to that issue, and they're currently not.”

While no one interviewed for this story claims that the task at hand is an easy one, students, staff, and administrators still express optimism at the prospect of a shift in the cultural environment around sexual assault awareness.

And culture-oriented measures are already going into effect. In addition to exercises such as the one in Winthrop, each male final club participated in bystander intervention training this year with OSAPR, according to Oeser.

Steven E. Hyman, former University provost and chair of the task force launched by Faust this spring, said that he and his colleagues intend to use the widespread wave of attention to the issue to make a lasting change.

“The goal is not to issue a document that makes us all feel good; the goal is to make a difference,” he said.

Fox-Penner and Our Harvard Can Do Better, though highly critical of University policies, seem to agree on this point.

“I think that there really is hope in terms of getting changes to take root that will go a long way towards changing this campus,” she said.