The Harvard Teaching Campaign has been vocal, but has struggled to win over admins 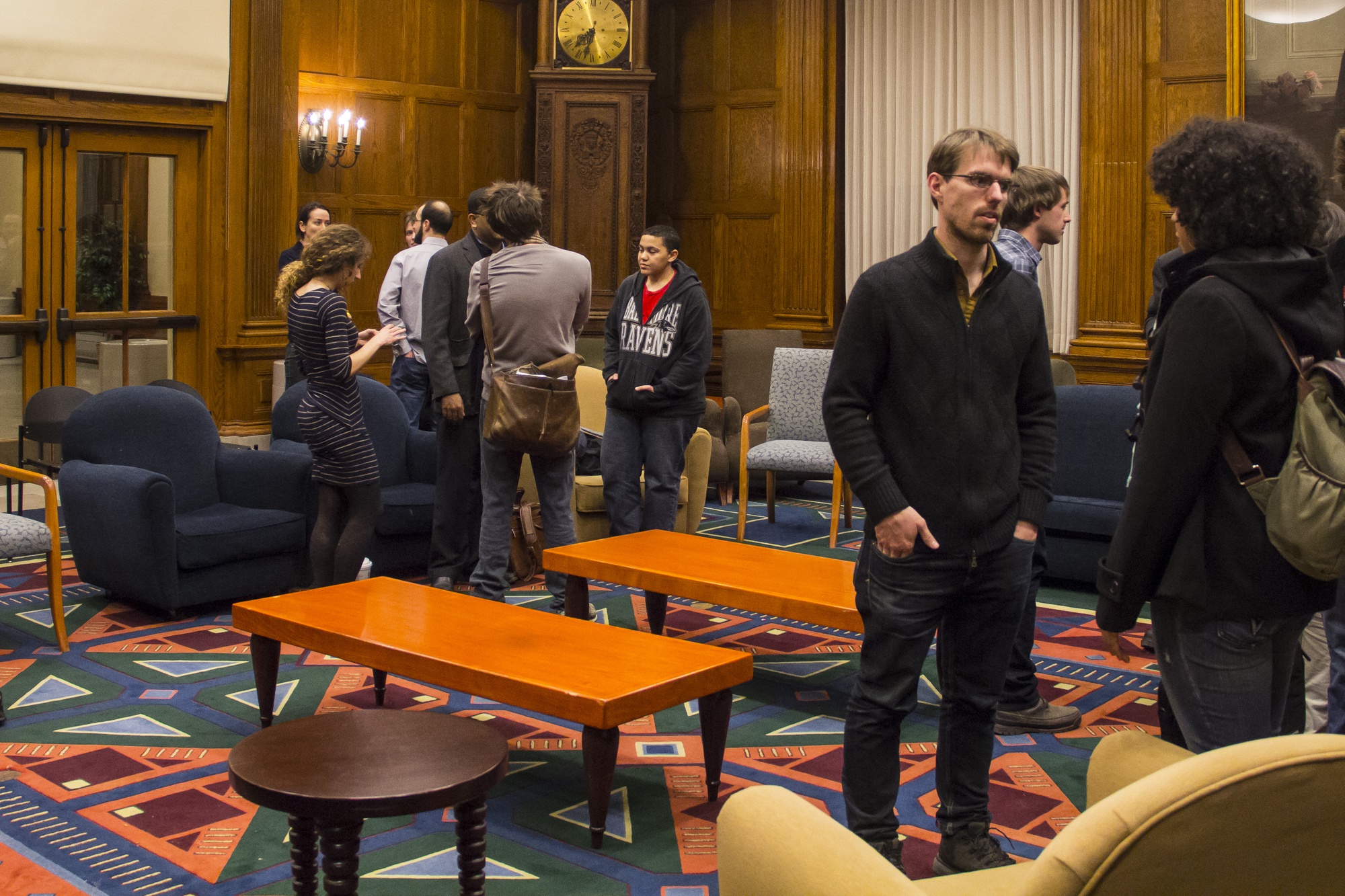 On the first day that she taught a section at Harvard, Margaret Doherty walked into a Robinson Hall classroom only to realize there were more students than chairs.

“I spent the first 15 minutes of that very first section carting chairs from one classroom in Robinson to the other,” Doherty, an English Department teaching fellow, recalls. 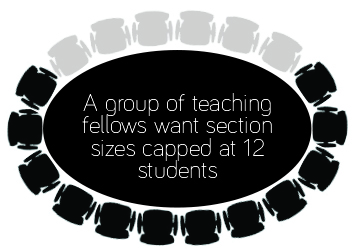 That semester, she was teaching two sections of an English lecture course. Each section included about 18 students, a number that she says caused unexpected problems as she found herself sitting in her office for five extra hours of individual meetings with students each day the week before a paper was due.

“That was really challenging, and I don’t think I gave students the right amount of attention that first semester,” she says.

Concerned that large sections like these might diminish the quality of the undergraduate experience and hinder their ability to train as professors, a group of teaching fellows united this spring to demand that the University restrict sections to 12 students.

Though the Harvard Teaching Campaign has drawn support from various departments and faculty members, the self-described “grassroots” coalition has yet to reach out to University administrators, who say that the universal section cap is neither needed nor practicable.

CAMPAIGN FOR A CAP

According to Doherty, pedagogical research suggests that class discussions involving more than 14 students are not as effective as those with fewer members.

“We thought that if 14 is the maximum, why not have it slightly below the maximum?” Doherty says of the campaign’s ambition for a 12-student section cap.

The section cap would replace the current size goal, which, according to Dean of Undergraduate Education Jay M. Harris, is 18 students for most lecture courses; though that number “varies depending on the type of course,” he said in February.

Doherty says that in her seven years as a graduate student, she has seen section sizes increase from eight to 12 students each up to 18 to 22, a rise that she says has decreased student engagement in sections. 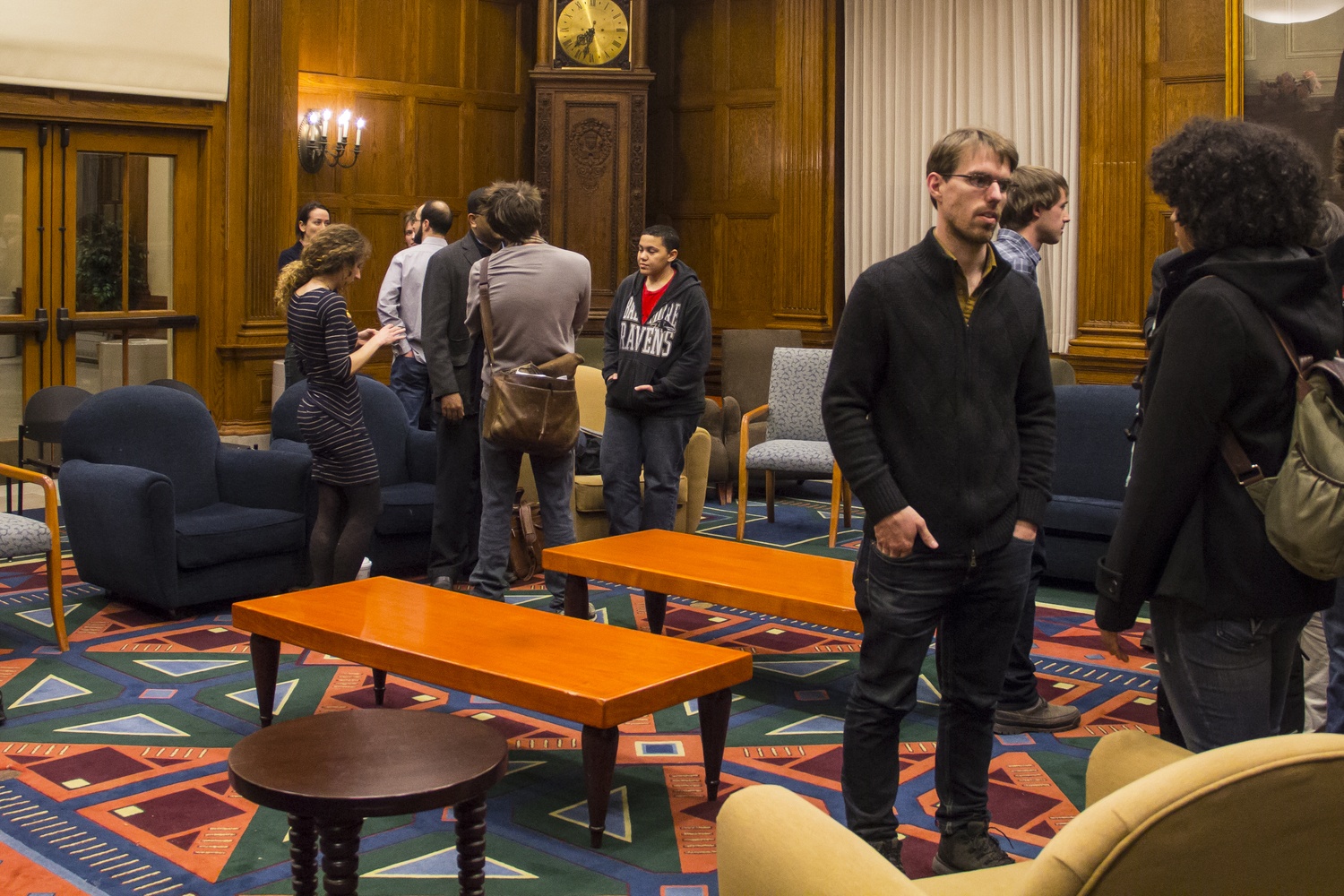 History professor Daniel L. Smail, who supports the Campaign, dates the growth back to the 2008 financial crisis, which he says caused the Faculty of Arts and Sciences to cut back on teaching fellows.

Doherty argues that larger sections have not only undermined undergraduate instruction but also made it harder for graduate students to learn how to teach, a skill which the Graduate School of Arts and Sciences policy on teaching appointments—the comprehensive set of policies on teaching fellows—calls “an integral part of professional training.”

“[Teaching fellows] cannot devote the same amount of personal attention to each student” as they could if they taught smaller sections, Groeger writes in an email.

In light of their grievances, Campaign members have urged members of the Harvard community—from undergraduates to faculty members and alumni—to sign a petition calling for smaller sections. In the past semester, the petition has amassed over 1,000 signatures, according to Groeger.

The group has received support for their mission from a number of faculty members, including collective endorsements from the Philosophy and Sociology departments. In a statement, Philosophy faculty members wrote that graduate programs serve to train the “next generation” of professors and called for “better working conditions” for teaching fellows.

In addition, more than 90 percent of the History Department signed a letter of support to various administrators, including Harris and FAS Dean Michael D. Smith.

Yet the group has yet to reach out to administrators, as they hope to build a “critical mass” of support from a more diverse range of departments, according to Michael A. Thornton, a teaching fellow for the Program in General Education and the History and East Asian Languages and Civilizations departments.

He and others have stated that the Campaign does not have any official leadership, and, as a result, that they could not speak about the group’s plans for future dialogue with administrators.

CONCERNS FROM THE TOP

Although they have yet to be approached by Campaign members, administrators say that they have concerns about both the rationale of the group’s demands and the feasibility of reducing section sizes.

One critique is that a section cap would be an inappropriate solution to issues that do not have a one-size-fits-all answer.

“I can imagine that for some courses, a very, very small section size, like maybe fewer than ten, would be appropriate. In other cases, it could be many more,” University Provost Alan M. Garber ’76 says. “We should think about section size as being dictated by the needs of the specific course.”

"Reducing the size of every section...risks creating more sections than we have qualified teachers," Dean of FAS Michael D. Smith said.

In a letter to the editor published in The Crimson in March, Sociology professor Christopher Winship called the Campaign’s demand “off the mark,” arguing that sections without required attendance can be effective even with more students. Winship is a key figure within the FAS governance structure as vice chair of the committee that sets agendas for monthly Faculty meetings.

In response to these critiques, campaign member and chemistry Ph.D. student John M. Nicoludis says that he wants to fight the perception that courses in certain subjects do not need small sections to facilitate an ideal learning environment.

“[Sections] are all meant to be participatory, discussion-based learning environments,” he said.

But even if a 12-person cap would improve the classroom experience across the board, University leaders say that the policy could create a supply-and-demand problem.

“Reducing the size of every section offered across our curriculum would instantly provide a greater number of teaching opportunities but risks creating more sections than we have qualified teachers," Smith writes in an email.

The focus, Garber says, should be on making sure that section leaders are well-qualified.

With a lack of qualified individuals to fill teaching fellow positions, graduate students might be assigned to teach outside of their areas of expertise to staff the new sections created to accommodate the section limit, Winship and others argue. If departments must hire teaching fellows from other schools in the University or even outside of Harvard, they may lack any preparation for teaching and may not have attended the trainings conducted by some departments.

“You can't at the outset know exactly how many students that you will have,” Garber says. “Therefore, you can't always perfectly anticipate how many teaching fellows you will need.”

While he says that he supports the movement, professor Nicholas J. Watson, interim chair of the English department, wrote in an email that he does not know “if there’s too much the [College] can do to manage section sizes while it remains unclear if 40 or 400 people will sign up for a given course.”

Doherty and other Campaign members have said that they would compromise with administrators about the section cap for certain courses.

“Whether or not that number is 12 across the board, I think that’s something we’re open to discussing,” says Doherty. “If there’s a compelling reason that 14 is fine in a section for a science course, then okay.”

But without outreach to administrators, negotiations and other discussions about the limit have yet to take place.

Instead, members of the Campaign hope to attract support from other segments of the University community, from undergraduate and graduate students and their parents to faculty members and alumni.

“Once that happens, I think it will sort of unfold from there,” Thornton says.