Wright’s Novel Glitters, But It's Not All Gold 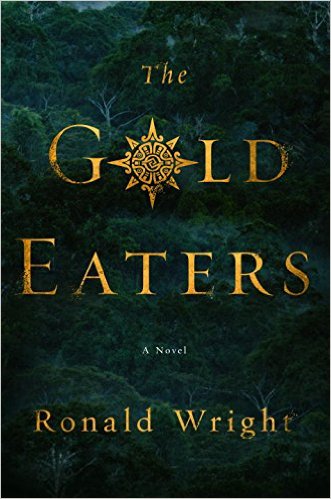 The Peruvian Incas are confused by the Spanish colonists’ obsession with gold and wonder if they eat gold to survive. The Spaniards laugh at this ridiculous thought. But yes, they jokingly concede, “We live on gold.” Through this misunderstanding, the Incas come to know the Spanish conquistadors as the eponymous gold eaters in Ronald Wright’s historical fiction novel, “The Gold Eaters.” Wright paints a vivid picture of Peru in the early 16th century as Spanish explorers and colonizers began to arrive, providing convincing perspectives from both the Spanish and the Incas’ side. Despite having an accomplished tone of historical realism, however, the novel is somewhat lacking in plot depth and character maturity.

Wright devotes a great portion of the novel to creating a colorful setting of Peru during the early 1500s, but he does so at the expense of his plot. The novel tells a somewhat cliche adventure and homecoming story through the eyes of Waman, a young provincial from the Incan empire who runs away from home shortly after coming of age. He is soon violently captured by Spaniards and is forced to become Francisco Pizarro’s interpreter. The novel mainly follows Waman’s journeys with the Spaniards, as they attempt to colonize the Incan Empire and search the land for gold. Waman is exposed to a new culture and language and must choose to defend his own while trying to find his way home. The story meanwhile follows Waman’s family and some of the other Spanish colonizers settling in the land. The plot is more or less straightforward and predictable. Its concept provides many opportunities for depth and surprise, but Wright’s adherence to historical fact seems to handicap his fictional license.

Many of the novel’s characters and events are based on real historical figures, which adds to the credibility of the setting. Francisco Pizarro, for example, is a major character, and Queen Isabel and King Charles of Spain make brief appearances. Wright has clearly done plenty of research on the Spanish colonization of Peru, as he provides detailed backstories for most of the historical characters. For example, he describes Francisco Pizarro’s impoverished childhood and how that leads to his merciless ambition. His knowledge on the subject matter is sound, and the setting and characters he creates are vivid and believable.

The book does succeed at highlighting the vastly different perspectives of the Incas, other Peruvians under the Incas, and the Spaniards. Each views the other as savage and strange. To citizens of the Inca empire, the Spaniards are pale as death. The Spanish view of these Inca citizens and their culture as uncivilized and barbaric is perhaps more familiar to the Western reader. When Waman begins learning Spanish, the colonizers ask him, “Como te llamas?” This only confuses him and makes him wonder, “Why was he speaking of llamas? They have none.” Perhaps the most telling moment of the difference in perspectives occurs when the Spaniards ask Waman what his land is called, and he tells them it is called Tawantinsuyu. They ask if it means something, and Waman can only say, “It means… the World, sir… You could say the Four Quarters or… the United Quarters of the World.” The Incas have no concept of the world beyond theirs. The cultural gap between the Incas and Spaniards adds humor to the story, but also allows a better understanding of each side’s motives and instills sympathy for both sides.

Although Wright has clearly mastered the historical background of his characters and setting, the novel is lacking in plot complexity and character development. Wright uses the present tense for nearly the entire novel; while when executed well the present tense can effectively engage and immerse a reader into a story, Wright’s prose sometimes begins to take on the quality of a middle school paper or a colloquial recount. The pacing of the plot is at times tediously slow, yet at other points it progresses at a disorienting speed. In the first chapter, for example, Waman’s cousin Tika gets into a wrestling fight with him, then kisses him and takes off her shift. Waman admires her breasts but is still set on leaving home, and then she resignedly helps him pack some food for his voyage, all over the course of one page. This scene is a pivotal event in the plot, but instead of elaborating on it Wright flies through it. Meanwhile, he devotes multiple pages to some details and dialogue that do not directly move the plot along but only supply cultural or historical information. Given that this is a novel, more emphasis on the plot and less on historical exposition would make for a more engaging story.

Unfortunately the characters are seldom very relatable, and as a result the reading experience feels very distant and unemotional. Tika, for example, is repeatedly mentioned in Waman’s thoughts and memories, but very little is actually revealed about her personality. Despite the fact that Waman sees her as one of his main motivations to return home, she remains very one-dimensional. Pizarro is more developed as a character, but whether he should be sympathized with or seen as despicable is not considered in a way that invokes a deeper layer of meaning. While sometimes a lack of obvious protagonists and antagonists can make a novel thought-provoking, it makes “Gold Eaters” difficult to fully engage with.

Wright’s novel is a well-researched historical work and is certainly an entertaining read. He provides a rich and vivid setting and paints a convincing scene of early 16th century Peru. There is little else to take away from the novel, however, than a history lesson. The story is not particularly intriguing or suspenseful, and it does not raise any questions still relevant today.