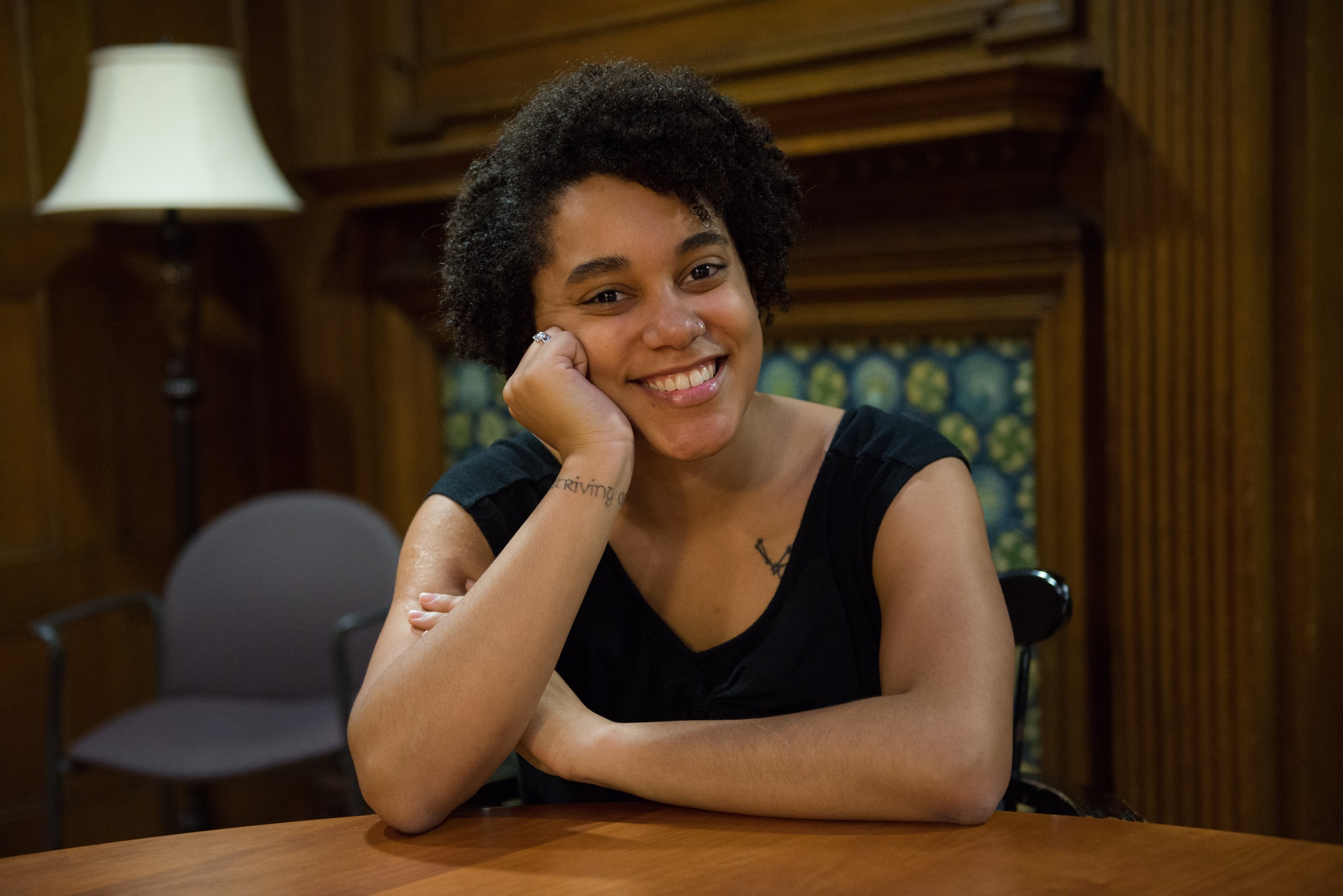 Moiya McTier '16 smiles in her favorite room in the Warren House, where her many of her Folklore and Mythology classes are held. By Alana M Steinberg

Moiya McTier is a joint concentrator in two of the most different fields from one another: Astrophysics and Folklore & Mythology.
By Emma K. Talkoff

If you’re looking for the life story of Moiya A.S. McTier ’16, you can find at least some of it inked on her skin.

At last count, McTier sports four tattoos. She tells me she might get another one tomorrow, or she might not. Each has its own significance. A row of turtles stack down her spine, a reference to the “turtles-all-the-way-down” trap about cosmology (if the earth rests on the back of a turtle, what does that turtle rest on?). The words “Onward, ever striving” loop around one wrist. Her first and favorite tattoo is a depiction of the constellation Orion, which hangs out just below McTier’s left collar bone. 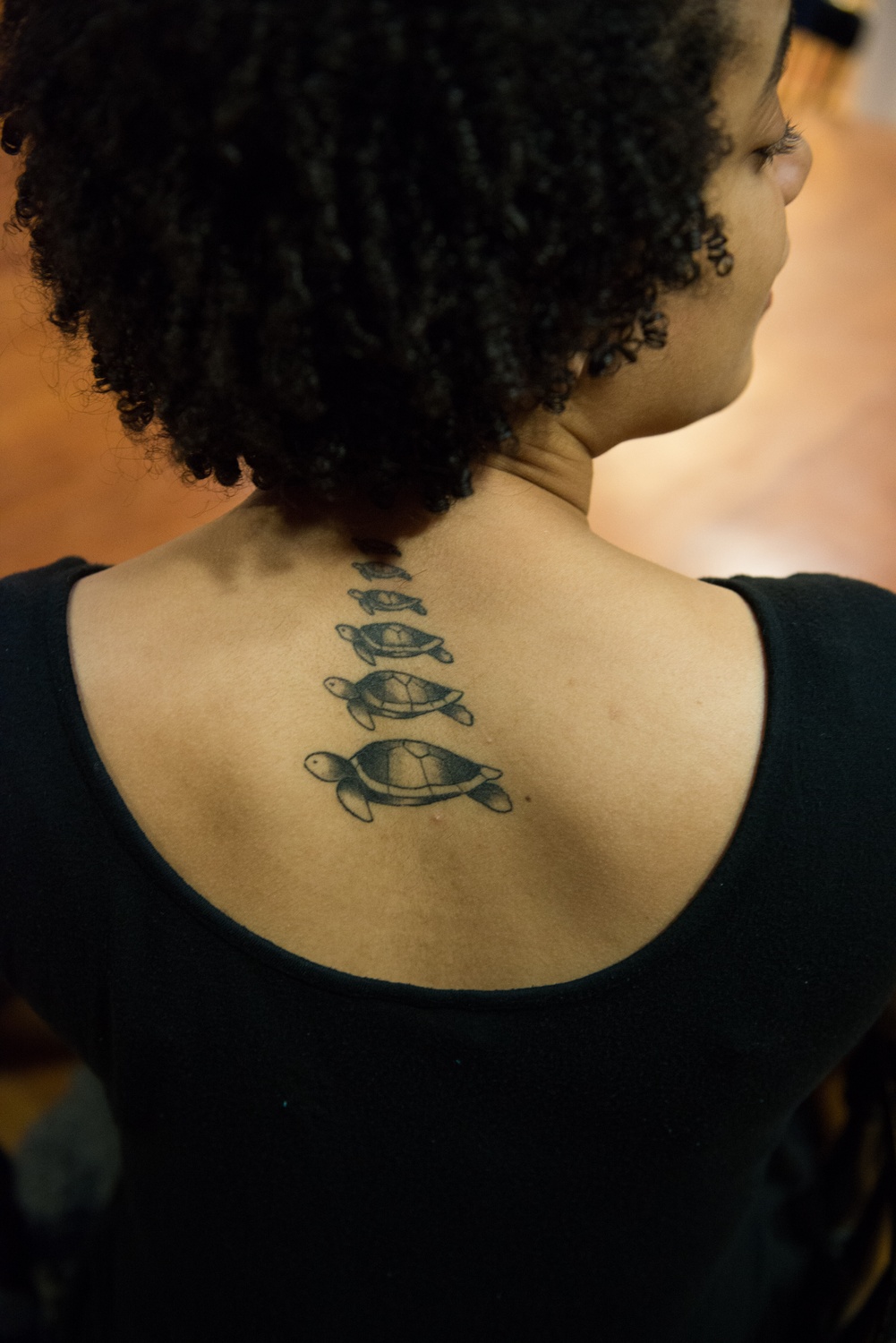 Moiya's tattoo has a double meaning: "turtles all the way down" is both an idiom for the infinite regress problem, but also reminds her that no matter hard you try, you can never totally understand a culture. By Alana M Steinberg

McTier’s tattoos can also tell you a bit about the universe. The graphs on her left leg chart a complex matrix of factors which can collectively reveal how dense and hot a galaxy is, as well as its metallicity. These factors can help determine whether that galaxy’s planets are habitable. The graphs are the product of research McTier conducted a couple of summers ago as part of her ongoing fascination with galaxies, exoplanets, and habitability.

“I feel like there’s some perfect combination so life won’t be disturbed in that region of the galaxy, so that’s what I’m trying to find,” McTier says.

Despite her propensity for permanent ink, McTier claims to be terrible at making decisions. Perhaps this is why she’s chosen to pursue a joint concentration in Astrophysics and Folk and Myth.

“For the most part, they’re really separate interests, but every once in a while one of them will really help with the other,” McTier says. “Astronomy is one of the sciences that requires people to communicate their science the most, because people don’t really understand it…It’s really useful to be able to tell a story to be able to communicate your science, so Folk and Myth definitely helps with that.” The combined concentration also helps McTier approach creation myths about the beginnings of the universe from a different perspective.”

McTier’s double concentration and fascination with potentially life-supporting regions of the universe has also led to a creative thesis—a science fiction novel about an alien race based on McTier’s original research about an exoplanet that she identified. Factors about that planet’s atmosphere, its relationship to its sun and the rest of its solar system, and more helped McTier determine what her alien characters would look like.

“The planet’s really hot,” she explains. “To our best estimate it’s around 400 degrees fahrenheit.” To account for life in this harsh environment, McTier will either have to “play around with the atmosphere on the planet to make it habitable,” or, she says, more likely, “play around with the life form.”

A college career spent studying the stars has also left McTier with an acute awareness of where Harvard astrophysics falls short. After interning at Harvard’s Banneker Institute last summer, where McTier participated in a pre-grad school astronomy program directed at students from underrepresented minority backgrounds, McTier began to notice a lack of diversity in the field.

“I realized just how skewed everything is here—I’ve only ever had one black professor, [and] I’ve never had any female science professors,” McTier says. “It amazes me that I didn’t notice before this summer.”

McTier’s solution, which she cites as the most important thing she’s achieved during her time at Harvard, was to spearhead the formation of an astrophysics mentorship program which will kick off next spring under the purview of an undergraduate astrophysics society.

As for the future, McTier hopes to continue her studies in both Astrophysics and Folklore and Mythology. She plans to pursue a Ph.D. in astrophysics (a decision which, like her choice to come to Harvard, she says she may leave up to a coin toss). She may later add a master’s degree in Medieval Urban Legends “or something absurd like that.” Someday, she hopes to run a museum or planetarium, to “teach people about science who might otherwise not learn about it.”

She is also hoping to keep asking some of the biggest questions about the universe. McTier interest in extraterrestrial life doesn’t end with her thesis. She “super believes” in extraterrestrial life, if only on the basis of probability and because to assume otherwise would be “egotistical” of humans. Luckily, McTier has a pretty laid back philosophy about all of this.

“I find it comforting, actually,” she says. “If we screw up, there’s maybe someone else out there who won’t screw up like we did.”