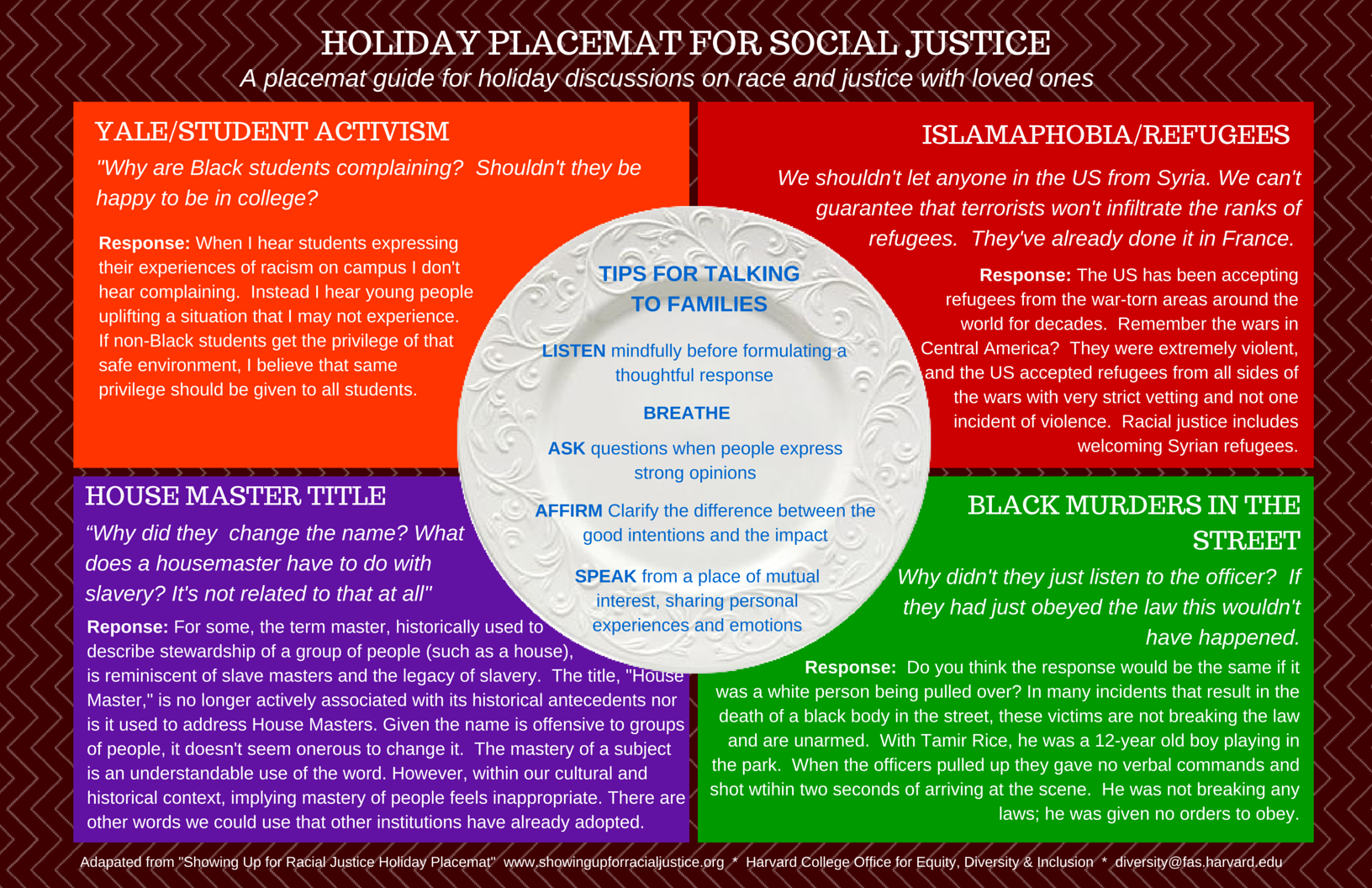 In Annenberg Hall and at least some House dining halls, students are being treated to a healthy helping of social justice reeducation, courtesy of Harvard College’s Office for Equity, Diversity, and Inclusion.

College administrators distributed a “Holiday Placemat for Social Justice” instructing students on how to answer questions they might face from family and friends. The handout presents poorly written, straw man questions followed by seemingly official and definitive “responses” on topics as varied as the Syrian refugee question, the Black Lives Matter movement, the misguided decision to change the House master title, and the ongoing, overheated activism at Yale University. 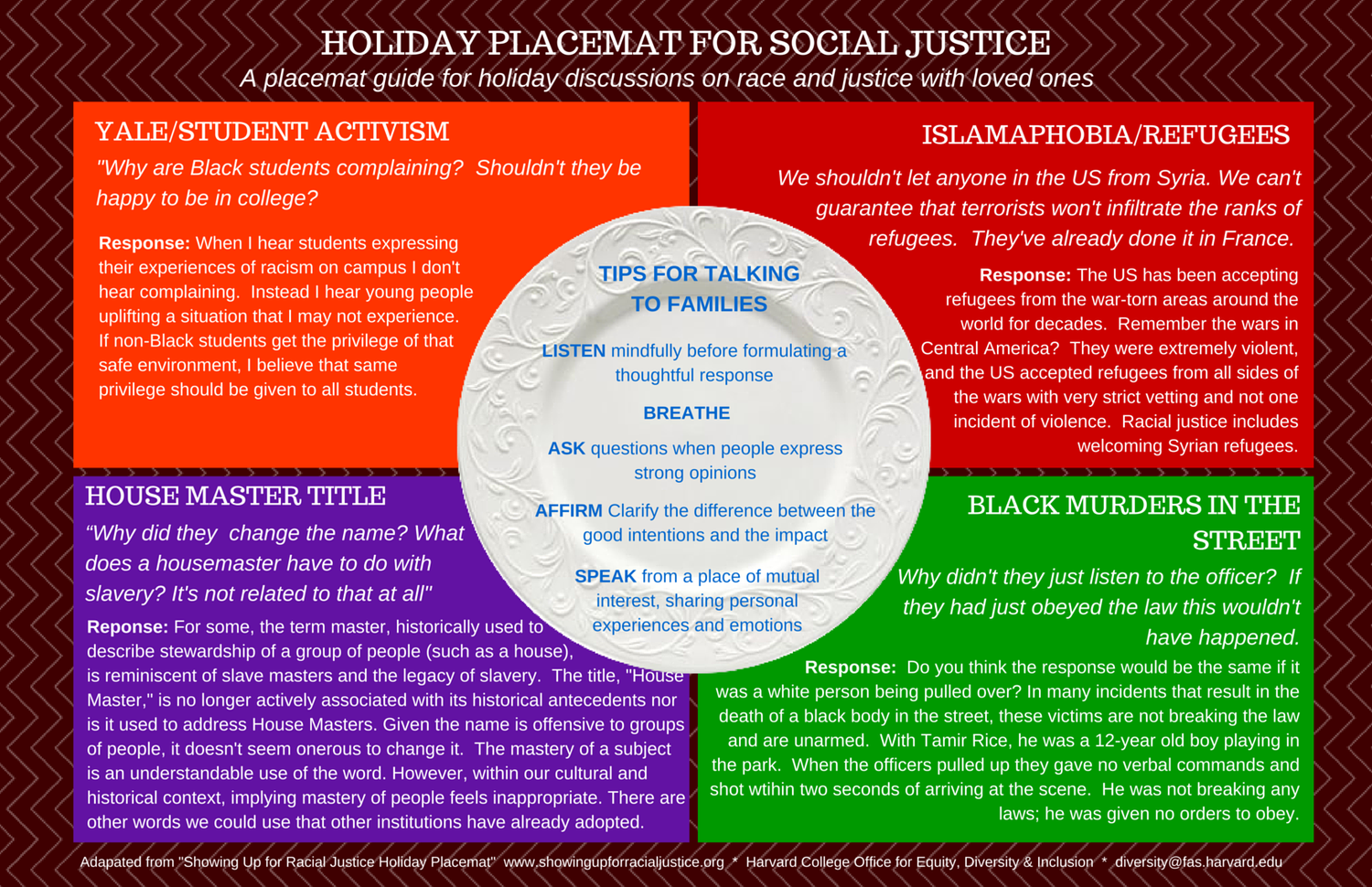 By Courtesy of Harvard College Office for Equity, Diversity & Inclusion

Before addressing the poorly contextualized framing of the questions, the impropriety of forcing College-endorsed political positions on students, and the groupthink this creates, let us examine the source.

More than half of the College’s poster is taken word-for-word from a similar, credited poster created by the group Showing Up for Racial Justice, a rather fitting reflection of the thoughtlessness it seeks to impose on students. That organization’s professed aim is to move “white people to act as part of a multi-racial majority for justice with passion and accountability.” To gain some perspective on their viewpoint, examine a recent article on their site that claimed, “we know that racist vigilantes and the police force have a long, collaborative history with one another.”

There was one area where the handout did not lazily lift from its predecessor: on the recent renaming of House masters to something supposedly less offensive—at least for now. There, the questioner correctly points out “Why did they change the name? What does a housemaster have to do with slavery? It’s not related to that at all.”

That doesn’t matter, the handout replies. Even though the word is “no longer actively associated with its historical antecedents”—and notice here the incorrect suggestion that the two were related, which is presented as fact—it is still offensive “for some.” Therefore, “it doesn’t seem onerous to change it.”

One can take that line of logic and run wild. Any professed claim of oppressive etymology should become actionable by the College on the grounds that it isn’t “too onerous.” Damn the facts, full steam ahead! That’s more than just revising history—that’s making a mockery of it.

Worse than the the quality of the arguments is the desired appearance that they are settled, and here is where the College's imprimatur is most disturbing. Dean of the College Rakesh Khurana did not justify the sudden renaming of the House master title in any discernible way—and how could he when even its advocates must admit that the underlying word association is entirely false?

Some may say that this is exactly the job that the Office for Equity, Diversity, and Inclusion should be doing. Even if we concede that the office should be in the business of promulgating its views on diversity issues relevant on Harvard, it should be doing so in a less shallow and simplistic manner. And even then, what need is there for the office to have a view on Syrian refugees?

The discussion on student activism at Yale, which “adapts” almost exactly the language originally written about protests at Mizzou, poses the question as “Why are Black students complaining?” Of course, people who have real concern with demands to fire Nicholas and Erika Christakis or to rename Calhoun College do not speak that way. But no matter.

The handout shamefully parallels a similar tendency among activists to conflate well-meaning people who have the audacity to hold contrary opinions with racists and demagogues. Either you toe the party line, or your justifications don’t matter because you are too white, too male, or too privileged in some other way. Opponents of Yale activism are portrayed as racist, and those with concerns about Syrian refugees are painted as Islamophobic.

Even for those of us who agree with the handout on all its issues, this is an area for concern. There must be debate on these issues, at Harvard’s tables and in our homes. Presenting unglorified talking points not only wrongly attempts to stifle debate, but also stands in stark contradiction to the mission of the College to transform students “with exposure to new ideas, new ways of understanding, and new ways of knowing.”

Admissions officers often spin hagiographies of Harvard’s dining halls and the conversations we have in them as the most formative portion of a Harvard education. Yet that is exactly what is threatened by such recklessness.