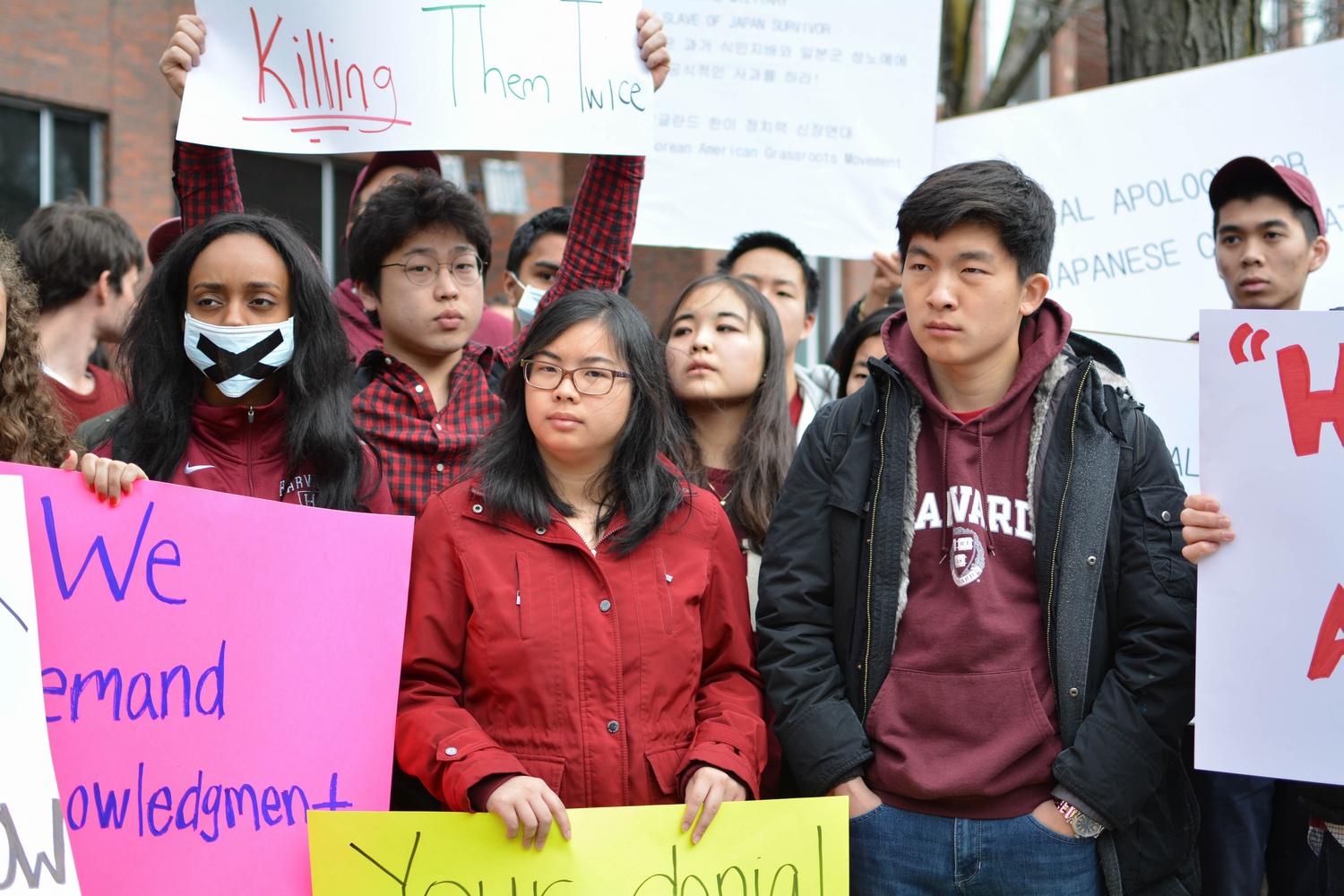 Harvard students hold up signs in protest of views expressed by Japanese Prime Minister Shinzo Abe on the treatment of “comfort women” during World War II. Abe, considered conservative by many, has attempted to play down the role of the Japanese government in wartime human trafficking. By Y. Kit Wu
By Luca F. Schroeder, Crimson Staff Writer

A visit from Japanese Prime Minister Shinzo Abe, who spoke about his reform agenda and the importance of stable U.S.-Japan relations at the Institute of Politics, was met with student protest on Monday morning.

The John F. Kennedy Jr. Forum event, moderated by Kennedy School professor and Order of the Rising Sun honoree Joseph S. Nye Jr., was one of Abe’s first stops in his weeklong tour of the United States, which is aimed at further strengthening economic and military ties between the two nations. Abe visited the site of the Boston Marathon bombings before his address on Monday and is scheduled to give an address before a joint session of Congress—the first for a Japanese leader—on Wednesday.

Abe’s remarks were preceded by an approximately hour-long silent demonstration organized by Harvard students that, according to an open letter read at the protest, protested his government’s “direct role in operating a system of sexual slavery during World War II.” Eighteen Harvard student groups and 161 students signed the open letter, which demanded an acknowledgment of the “Japanese government’s direct involvement in the operation of comfort stations.” Abe has come under fire for his historical revisionism and attempts by the Japanese government as recently as this January to edit passages in U.S.-published textbooks about World War II and Japanese military brothels.

“When it comes to the comfort women issue, my heart aches when I think about those people who were victimized by human trafficking and were subject to immeasurable pain and suffering,” Abe, speaking Japanese, said during the IOP address according to a live translation. Abe noted that he has chosen to uphold the 1993 Kono Statement expressing “remorse” for the military’s involvement in sexual slavery. “In the 20th century, we have seen history where once conflict arises, women’s human rights and honor are deeply wounded—we had such a history,” Abe added.

“I am a Korean woman—definitely part of that just hit me stronger, because you can see your face and your body in these pictures of these women who suffered so much,” Cho said, emphasizing that she had contacted the Office of Student Life, the Harvard University Police Department, the Cambridge Police Department, and others to ensure that the demonstration was respectful. “It seems like [Abe’s] words don’t match his actions—he says he upholds the Kono statement, yet he promotes a revisionist history.” 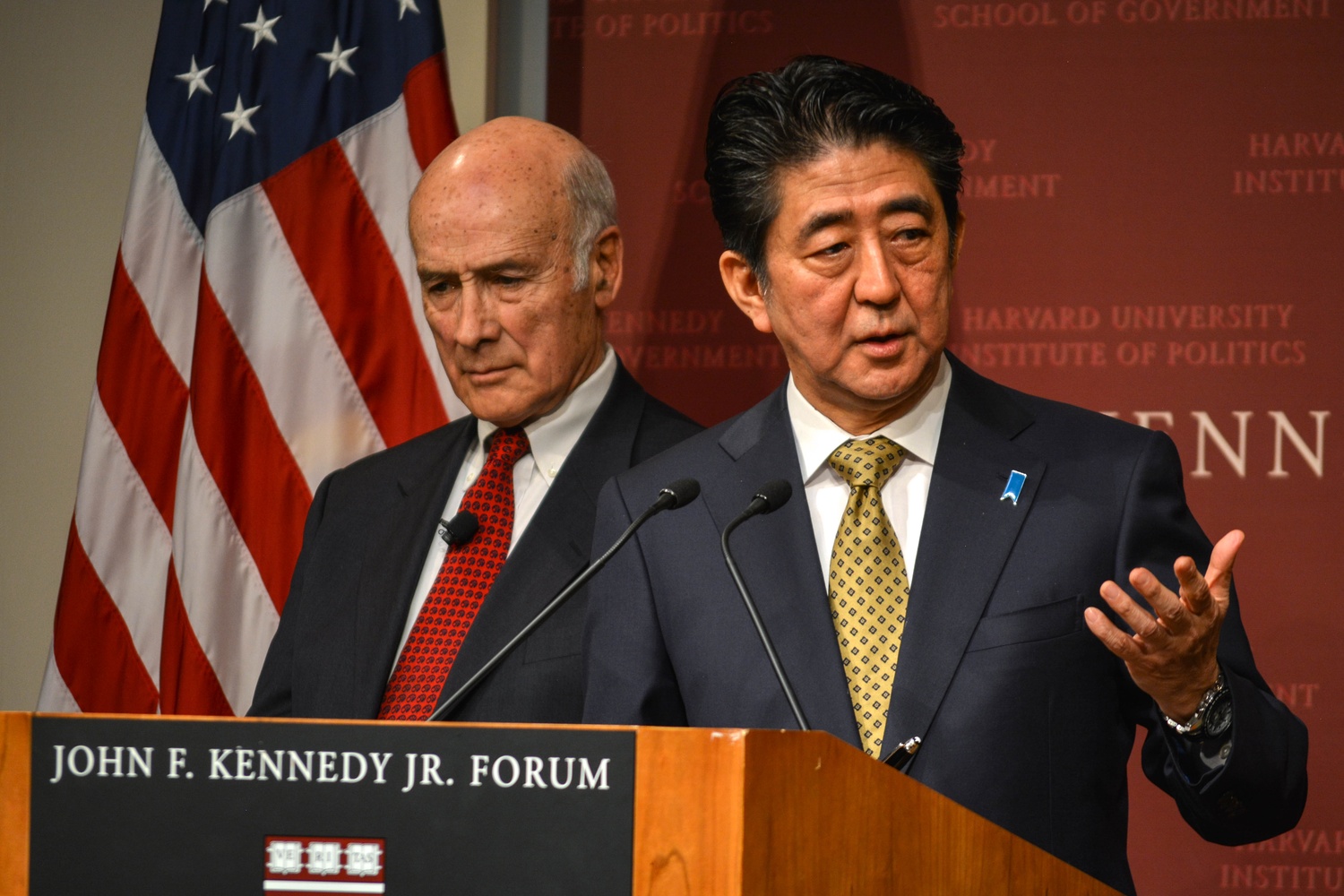 Japanese Prime Minister Shinzo Abe, next to Harvard’s Joseph S. Nye, responds to a question from the audience on Monday morning at the Institute of Politics. Abe, currently on a visit to the United States, touched upon topics such as economic development and international cooperations as well as more recent developments in women’s rights. By Y. Kit Wu

Abe’s remarks also focused on the challenges of implementing large reforms that deplete political capital, asserting that despite the fact that historically most administrations have only been able to “deal with at most one or two reform agendas that are meaningful,” he had “tenaciously engineered a succession” of reforms aimed at individual empowerment, human security, and gender equality.

“Reform never comes without resistance. There will always be pressure from society to suppress it,” Abe said. “Still, once you have reached a decision, of course after having given it rigorous thought, you must carry through on it.”

“For many years, American policymakers in Washington would complain that they couldn’t remember the name of the Japanese prime minister, because it changed every six to twelve months,” Nye said when introducing Abe. “No longer. Everybody in Washington knows the name Shinzo Abe.”