Printing in the Digital Age 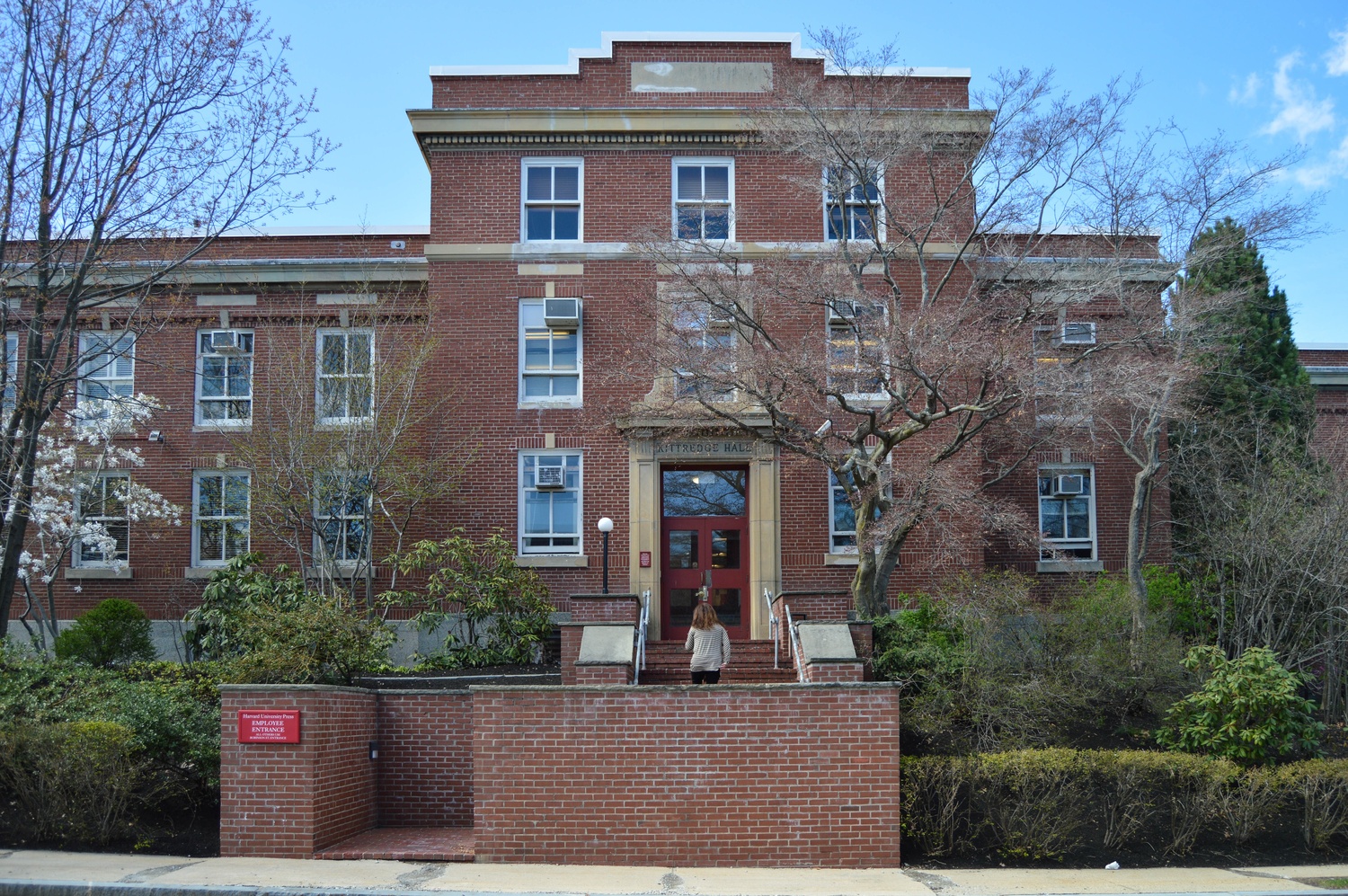 Harvard University Press, founded in 1913, must seek to adapt to the digital age while still maintaining its distinguished academic reputation. By Y. Kit Wu
By Elizabeth C. Keto, Contributing Writer

Publishing at Harvard has almost as long a history as the University itself.

Harvard College became home to the first printing press in the American colonies in 1641, when the school’s first president, Henry Dunster, married the widow of Massachusetts’ first printer. In 1913, the Harvard Corporation established Harvard University Press, the University’s publishing house. Since then, the press has published the works of such scholars and writers as T.S. Eliot, John Rawls, Toni Morrison, and E.O. Wilson.

Yet despite its long history, Harvard’s venerable press today faces a period of profound transition common across the American publishing industry. To continue to fulfill its mission as it begins its second century, Harvard University Press is rethinking and modernizing the methods of academic publishing while maintaining its traditional standards for the works that carry the Harvard name on their spines.

While stagnant print sales, pricing disputes with online vendors, and the shuttering of independent bookstores over the past decade have placed pressure on commercial publishers’ bottom lines, Harvard University Press has the freedom to publish for purposes other than profit. HUP operates according to a different economic logic than commercial publishers: The press is endowed and under the jurisdiction of the University Provost’s office as a part of the larger non-profit corporation of the University.

“For-profit publishers face the challenge of satisfying shareholders, while our biggest challenge is to ensure that we publish works of the highest enduring scholarly value,” Director of Harvard University Press William P. Sisler wrote in an email.

“The audience for our books can range from the hundreds of thousands to a few thousand,” Sisler wrote.

Sharmila Sen ’92, executive editor-at-large at HUP, said that the press’s reason for publishing any particular book is largely independent of the size of the audience it will reach.

“Finely argued, technical, specialist books will have an audience in the hundreds. And that’s fine, because a lot of works in scholarship that have gone on to change the world began as very academic ideas that only a select few people understood or were willing to grapple with,” she said. “But their impact is now felt around the world.”

“HUP is one of the few presses that straddles the difference between trade publishing and academic publishing,” said Steven Mintz, professor of history at the University of Texas at Austin and author of The Prime of Life: A History of Modern Adulthood, published by HUP this year. “It’s one of the few presses that both has a rigorous academic review process and can reach a larger readership.”

Still, sales of academic books are difficult to predict, he said.

“Sometimes books are caught by the cultural breeze, and they connect with a broader readership; they speak to where the public is—and sometimes they don’t,” he said. “If you’re expecting to make a profit, you’re doomed to disappointment.”

HUP’s largest-ever sales success was the English-language translation of Thomas Piketty’s “Capital in the Twenty-First Century,” which reached number one on the New York Times nonfiction bestseller list in 2014.

Most of the books published by HUP, however, sell in far smaller quantities to more academic audiences, but the press increasingly seeks to publish for a broader readership base, both in terms of interest and geography.

Robert Douglas-Fairhurst, a professor of English literature at Oxford University whose book "The Story of Alice: Lewis Carroll and the Secret History of Wonderland" will be published by HUP later this spring, said he imagines an audience of average readers rather than scholars for his book.

“This isn’t an academic study,” he said.

Other authors also emphasized the need for academic publishers to seek markets outside the world of higher education.

“I really don’t believe that professors should write only for themselves,” said Peter Brown, professor emeritus of history at Princeton who published with HUP this year.

Beyond publishing for audiences outside of its traditional academic base, HUP is also expanding into new markets on a global scale: It is the first American academic publisher to have an office in South Asia.

“We view our presence in South Asia as part of our mission as a global publisher to ensure that our books reach the widest possible audience,” wrote Susan Donnelly, HUP’s director of sales and marketing, in an email.

Donnelly added, “In order to make our books as accessible as possible to this readership, we offer certain titles...in special editions for the South Asia market at a lower price.”

But despite the paradigm shift brought about by the rise of self-publishing, HUP has maintained the traditionally high standards and rigorous review process of an academic press.

“The standards are very high, and it’s important that they be high, because after all, these books carry the Harvard name on their spines when they go out into the world. They have to match the reputation of this university,” said editor Sharmila Sen.

Once an author submits his or her work, it is read by at least two anonymous peer reviewers, to whose comments the author must present a written response. HUP’s Board of Syndics, comprised of members of the Faculty of Arts and Sciences and the professional schools, must then give the book final approval, according to Sisler.

“It means a great deal, especially to a young scholar, to be published by Harvard, because it's an old and well-known press with high standards,” said University professor Helen H. Vendler, who has published with HUP since 1963.

While self-publishing has opened the field of authorship to anyone with a laptop, HUP works primarily with academics. Many Harvard faculty publish with HUP—the summer 2015 catalogue includes books by Vendler, History of Art and Architecture professor Robin Kelsey, and English professor Gordon Teskey—though Harvard faculty do not receive any official preference from HUP, according to Sisler.

Despite the primarily academic background of the writers the press publishes, Sen emphasized that in her work as an editor she seeks the broadest possible authorship.

“I work very hard to seek people out, especially people who are doing interesting work in emerging fields or in other countries,” she said. “One of the things I really believe in is that diversity and a global perspective are important in scholarship today.”

For his part, Peter Brown, the Princeton history professor emeritus, affirmed the continued importance of academic publishers as guarantors of quality in a diverse, expanding information economy.

As self-publishing has expanded over the last decade, digital publication has also become vastly more widespread, and digital formats have left their own profound mark on the American publishing industry. By 2014, e-books accounted for 27.2 percent of adult trade book sales, according to the Association of American Publishers. And now, like other publishers, HUP is seeking new opportunities in this increasingly digital world.

“We see digital formats as an important means of reaching readers and furthering scholarship,” Sisler wrote.

In September 2014, HUP launched the digital version of the Loeb Classical Library, a collection of over 500 volumes of Greek and Latin texts with facing-page translations that the press has published since 1934.

“Partly that was to make it searchable…and partly just to give access in a world where digital resources are clearly—if not taking the place of place of printed books—at least living side by side. For people who live through their iPhones or tablets or computers, having the Loeb be available there was something we wanted to do,” said Richard F. Thomas, Harvard Classics professor and trustee of the Loeb Classical Library. He added that he considers the digital library a success so far.

However, Thomas and others also express reservations about new technologies. For a series whose mission is to preserve the past, rapidly evolving digital formats can be frighteningly impermanent, he said.

“[The digital library] doesn’t remove the need for libraries to be collecting and archiving. With the Loeb, we’re going to have to be careful of time, so that the platform and the technology are able to evolve over time and still be accessible,” said Thomas.

For her part, Helen H. Vendler said she is skeptical of the applicability of digital formats to academic books.

“It's not clear, given the expense of publishing a book and the problematic future of e-books...what the future will look like.  I can't imagine a life without books one can handle and consult with ease,” she said.

Given the mix of problems and potential advantages Thomas and Vendler said they see offered by new reading technologies, the future of scholarly publishing in the digital age remains an open question.

“Academic presses help to push knowledge forward and to record and distribute our intellectual accomplishments in robust, handy, and durable forms,” said Kelsey, the HAA professor who will be published by HUP this spring. “I sure hope they can find ways to thrive in the era of digitalization.”