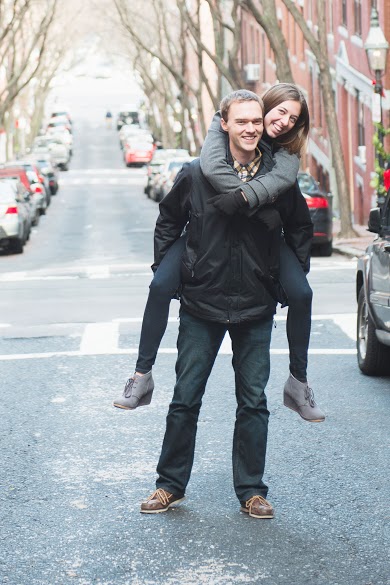 By Courtesy of Larissa K. Davis

Where you met: We met at Harvard. Initially we met my freshman year. We're both involved in Christian Impact so I met him there and honestly didn't really take much notice of him until he started attending the same church as me in Porter Square.

When you got engaged: He proposed last November. He went home for a little bit, back to Detroit, and he came back to Boston last May, and he started working for Toast, which is a startup based in Alewife right now. [We're getting married] June 6, at the church we met at, Hope Fellowship in Porter Square.

Most memorable date: We took just a day trip to New York City, which was crazy and really fun. After he finished his last final, the next day we took an early bus to NYC and I had never been before. He actually finished in December of 2013, and so it was Christmastime, and he taught me how to ice skate in Rockefeller Center, which was really sweet. We walked in Central Park.

Three words to describe yourselves as a couple: Intentional, caring, and fun

What your friends would say about you: We're a quiet couple, but we're sweet and that we're good at including others in our relationship.

Something you’ve always wanted to tell people: One of [my father's] concerns when I came up from Texas was that I would marry a “Yankee,” because he wanted me to move back to Texas and thought marrying a Yankee would make that unlikely. And when Tim asked my father if he could marry me, my dad does consider Tim a Yankee, but my dad was really sweet about it, and while he was a little hesitant at first, I thought that was really sweet, that my dad couldn't imagine me marrying a Yankee, and now he couldn't imagine me not marrying Tim even though he considers him one.

An anecdote that captures your relationship: Since he left Harvard, I have written him a letter once a month and given him a picture that kind of represents the month. And he collected them and put them in a photo album.

I think it shows how much we care about each other and value each other but also shows a little bit of wisdom and reflection and how we evaluate our time month by month, telling each other the things that we appreciate about each other, and how we improved in communication together month by month. Initially it was while he was gone, and I continued it while it was back, so I have continued and I will write one on our wedding day. After getting married I think it'll probably be an anniversary thing, where I write a nice letter and we have a picture and we evaluate the year.

In 15 minutes you are: Continuing planning for the wedding, but doing it over a meal.

In 15 years you are: I hope that we'll be very similar, very much in love and excited to be together, and hopefully have a family and careers, but still be, despite other distractions, very intentional, and devoted to our own relationship.