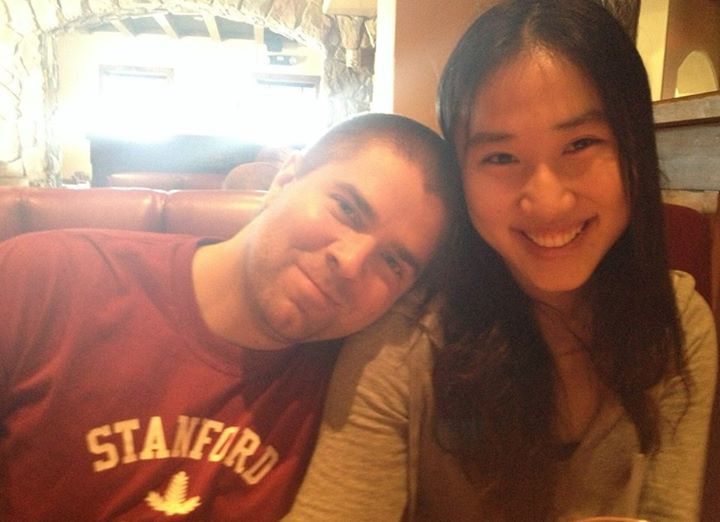 Dating since: Actually we never really did date. We became best friends, hung out constantly, and then got married. I don't even think we had dinner together at a restaurant until after we were married.

Where you met: In Professor Wai-Yee Li's class on Shiji, an ancient historical text. A year or so later, a friend told me someone had told her a story about a Chinese literature seminar that led to two students getting married, which was pretty funny.

When you got married: We got married my sophomore year. It was really fast I suppose. We had known each other less than a year, but it was honestly one of the easiest decisions we ever made.

Most memorable date: Well, we never really did date, but when we first became friends, I taught him about ancient Chinese poetry. I even prepared powerpoints and reserved a study room, and he taught me martial arts. He prepared a big bag for me to kick.

Three words to describe yourselves as a couple: I'm never sure how to answer this sort of question, so how about the names of the three video games we most often play together? Baldur's Gate, Elder Scrolls: Morrowind, and XCOM: Enemy Within.

What your friends would say about you: That I disappeared after getting married, which I completely did.

Something you’ve always wanted to tell people: While driving around Iceland, we listened to an audiobook of “The Silmarillion” in the car. The mood matched the scenery perfectly, and I highly recommend it.

An anecdote that captures your relationship: When I was away doing a summer program for a few months, Tim made a series of short videos chronicling our two dogs acting out the general plot of an Wuxia ("martial hero") novel. The action scenes were epic.

In 15 minutes you are: Talking with Tim for hours about random things.