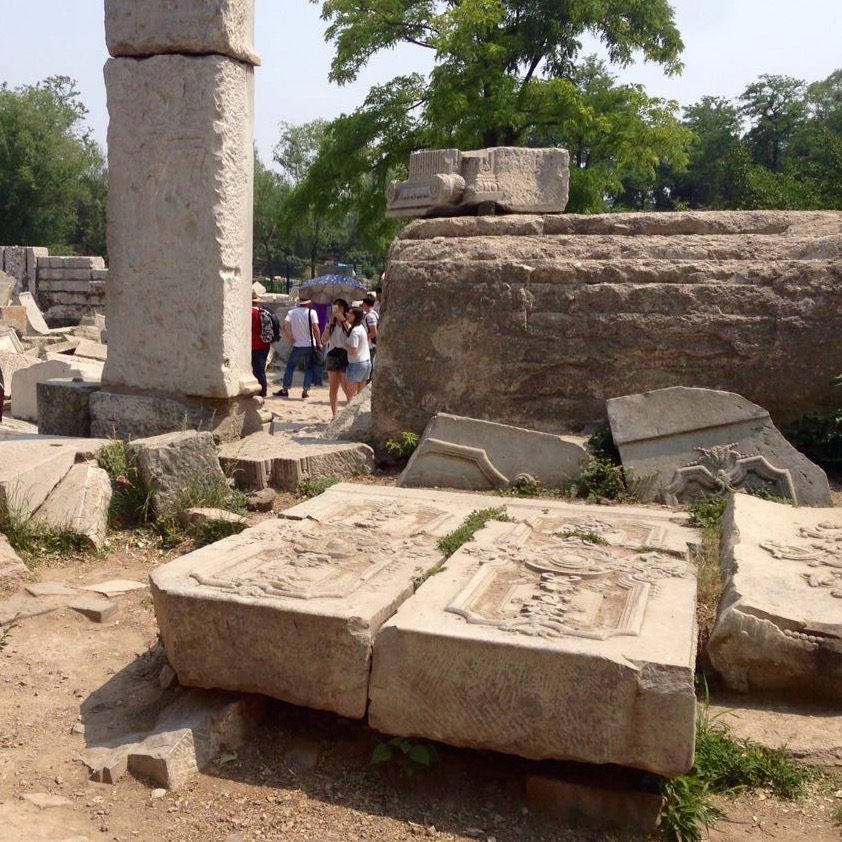 BEJING—There’s only one stone bridge left in Yuanmingyuan, a small arch over a narrowing in the stream, outside the West Gate. It once had a name, but now more than half of its structure is missing, and it is simply called “The Crippled Bridge.” I stop to take a picture.

Yuanmingyuan once held hundreds of these bridges, their elegant arches stroked by weeping willows. Once upon a time, the emperor of China lived here, in sprawling, intricately constructed maze of gardens, lakes, and palaces spanning over 860 acres. Architectural styles ranged from European-style mansions to traditional Chinese pavilions, with their gentle, lilted rooftops curled towards the heavens. A British commander who burned it down wrote of Yuanmingyuan, “You cannot imagine the beauty and magnificence of the places we burnt.”

Today, the white slabs of rock that once composed these palaces lie in a heap of rubble, pale and shiny in the morning sun. Yuanmingyuan was burned down by Anglo-French soldiers during the Second Opium War, part of the long and brutal history of the demise of China’s Qing dynasty. It took 3,500 British troops to set the entire place ablaze. Raging fire over three days tore down the gold-gilded wood of the palaces, crumbled bridges and pavilions to the ground. Looters took what porcelain and jewels they could, leaving only ruins behind.

Each patch of ruins is guarded by a diagram what this heap of stone might have looked like, once upon a time. As I gaze at one, I feel the aching loss of palaces I’ve never seen. We can never know what Yuanmingyuan looked like, can never rewind history, can never rebuild to how it once was. The splendor of human achievement can never be replicated, and the terror of human destruction can never be undone.

History is set in stone.

My mother interrupts my nostalgia to beckon me to pose for a picture, pointing to the remnants of a building that once looked like a replica of Versailles. She explains that these are new ruins that had just opened to the public. Some tourists nearby hold out their selfie stick for a group picture, their smiles gleaming. I’m still caught on the words “new ruins.”

As we tour the rest of the park, a curious sense of hope gradually crowds out my melancholy. Recent renovations have revealed new lakes, planted new trees, and installed fully handicapped accessible bathrooms. Beijing is wealthier than it’s been since the Qing dynasty, and China’s economy is the largest in the world. Hence, the park today, although far from its original 860 acres, is ten times the size of what it was in decades past. Centuries later, a legacy of war and shame, of opium and ruin, can be built on top of. History can be made again.

We pass the lone bridge again on our way out and emerge outside the park, the midday sun bright in our eyes. In the distance, skyscrapers dot the city skyline.

Eva Shang ’17, a Crimson editorial writer, is an economics concentrator in Eliot House.