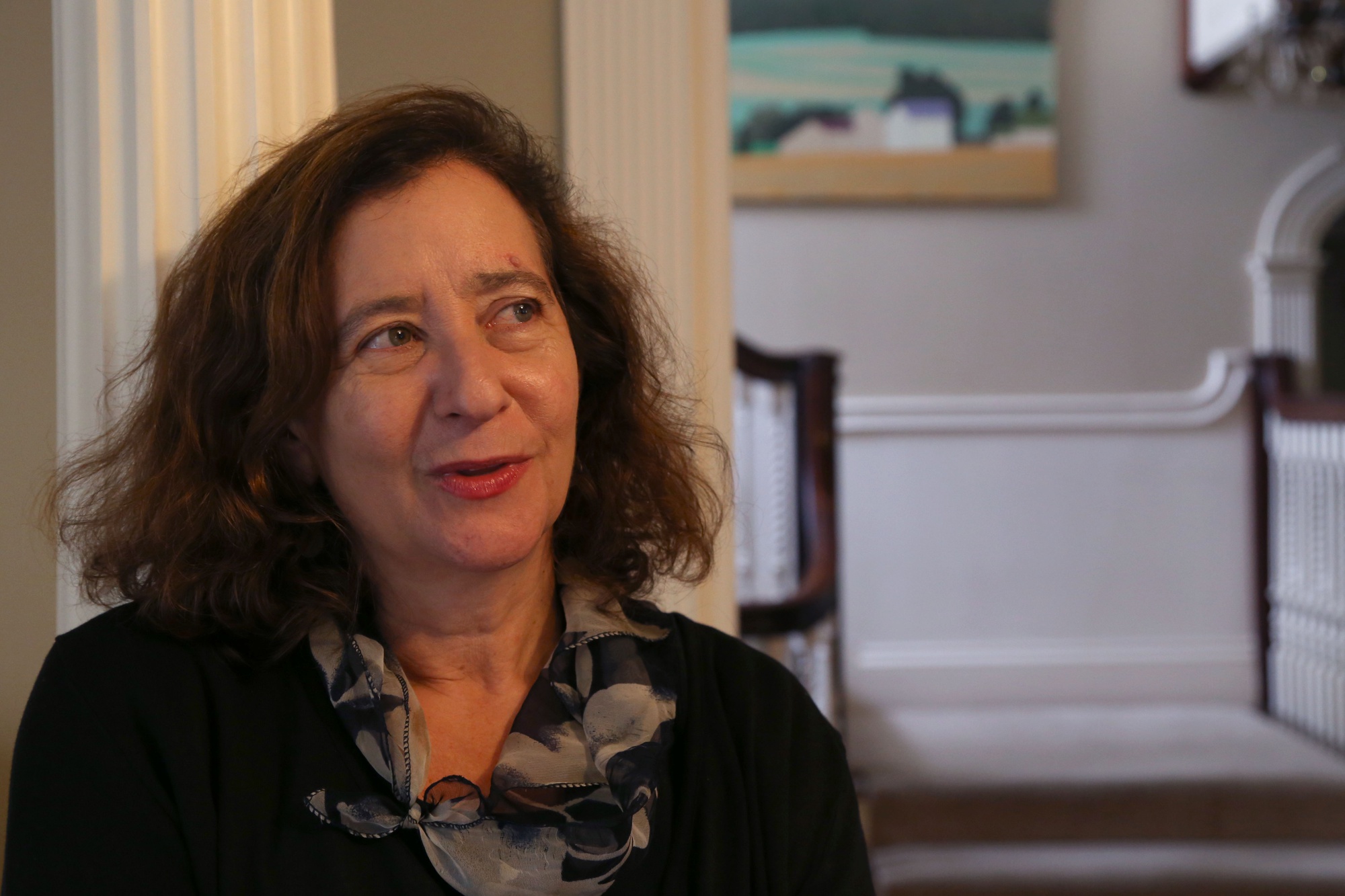 Summers' wife and English professor Elisa New speaks during an interview with The Crimson in her home in Brookline earlier this month.
By C. Ramsey Fahs, Crimson Staff Writer

The series will be funded independently of Harvard in part through a non-profit organization that New created and distributed by local station WGBH. The television show joins the "Poetry in America" Initiative’s three other components: a series of massive open online courses with HarvardX and collaborations with the Graduate School of Education and PBS Learning Media. 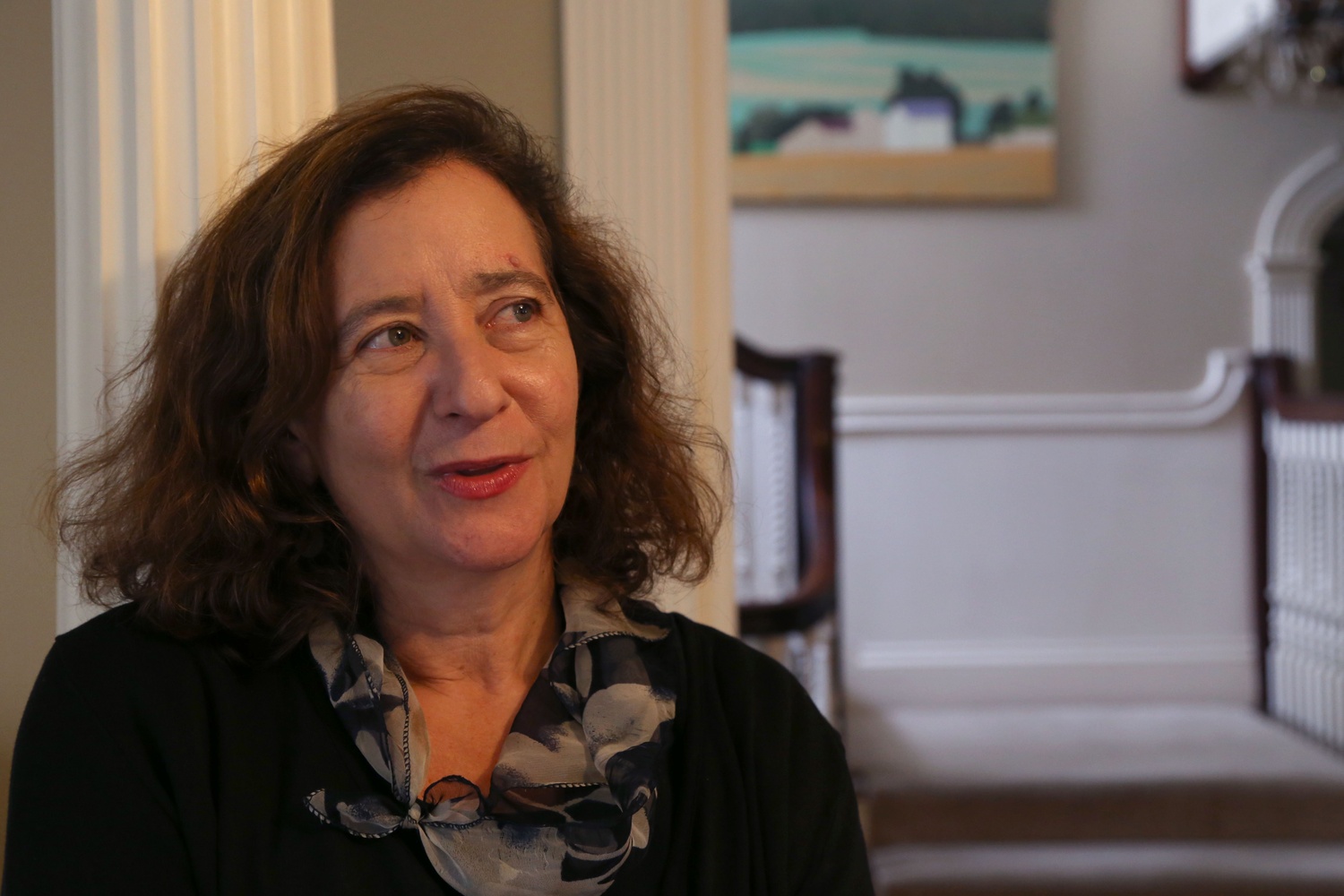 English professor Elisa New spoke during an interview with The Crimson in her home in Brookline in October 2014. By Madeline R. Lear

New, who took a sabbatical last year to focus full-time on the project, started to consider expanding the initiative soon after production began on the first of seven HavardX MOOCs, which are designed to give an overview of poetry in America from early New England to the modern day.

“When it became clear that I really was succeeding in having these conversations with really recognizable people, I went to WGBH and asked if they thought there was anything we could work on and they said absolutely,” New said.

The first television show will feature an interview with former President Bill Clinton—in which he discusses “Harlem,” by Langston Hughes—that New brought to WGBH with her initial proposal.

New said her initiative retains the use of its own videographers and course developers, who are paid in part by Harvard for the work they do on the HarvardX component, and in part by a non-profit set up by New to raise funds for the initiative. New noted that there were significant advantages to having her own video production team, including her organization’s ownership of the footage and their ability to shoot on-location at a moment’s notice.

Though WGBH declined to provide any details on the funding model for the show, New confirmed that she has secured funding for the first season and is hoping to secure funding and a contract for a second season soon.

“We explored [expanding with HarvardX] and I think HarvardX, in a really professional and crisp way, decided that what their mission was for the moment was making courses,” New said. “Of course there’s a financial aspect to it [as well]. And so I’ve raised a lot of money that is now in these various projects.”

“The simple reality is that Poetry in America…is much bigger than a HarvardX course now,” said Biology professor and Faculty Director of HavardX Robert A. Lue.“I think everyone would agree that the resource base goes beyond what HarvardX can do. I mean, HarvardX does have a budget.”

Beyond fundraising, New said she has devoted a significant amount of her time to the initiative, saying that she is now working “twice as hard as I’ve ever worked for no profit.” Part of the draw is the ability to reach far more people than she could through more traditional pedagogical methods, she said. The most popular of New’s MOOCs, the module on Dickinson, draws 1,000 to 3,000 participants a week.

“In one week, I have more impact than my books have. My three books,” New said. “These still are extraordinary numbers in my experience for a humanist to be reaching.”

“Increasingly there are powerful pressures in contemporary societies that militate against an interest in arts and humanities generally,” said English Department chair W. James Simpson. “That being the broader situation, it strikes me that what Professor New is doing is exactly right.”

An earlier version of this article incorrectly stated the number of modules in "Poetry in America." In fact, there will be a total of seven, not five.