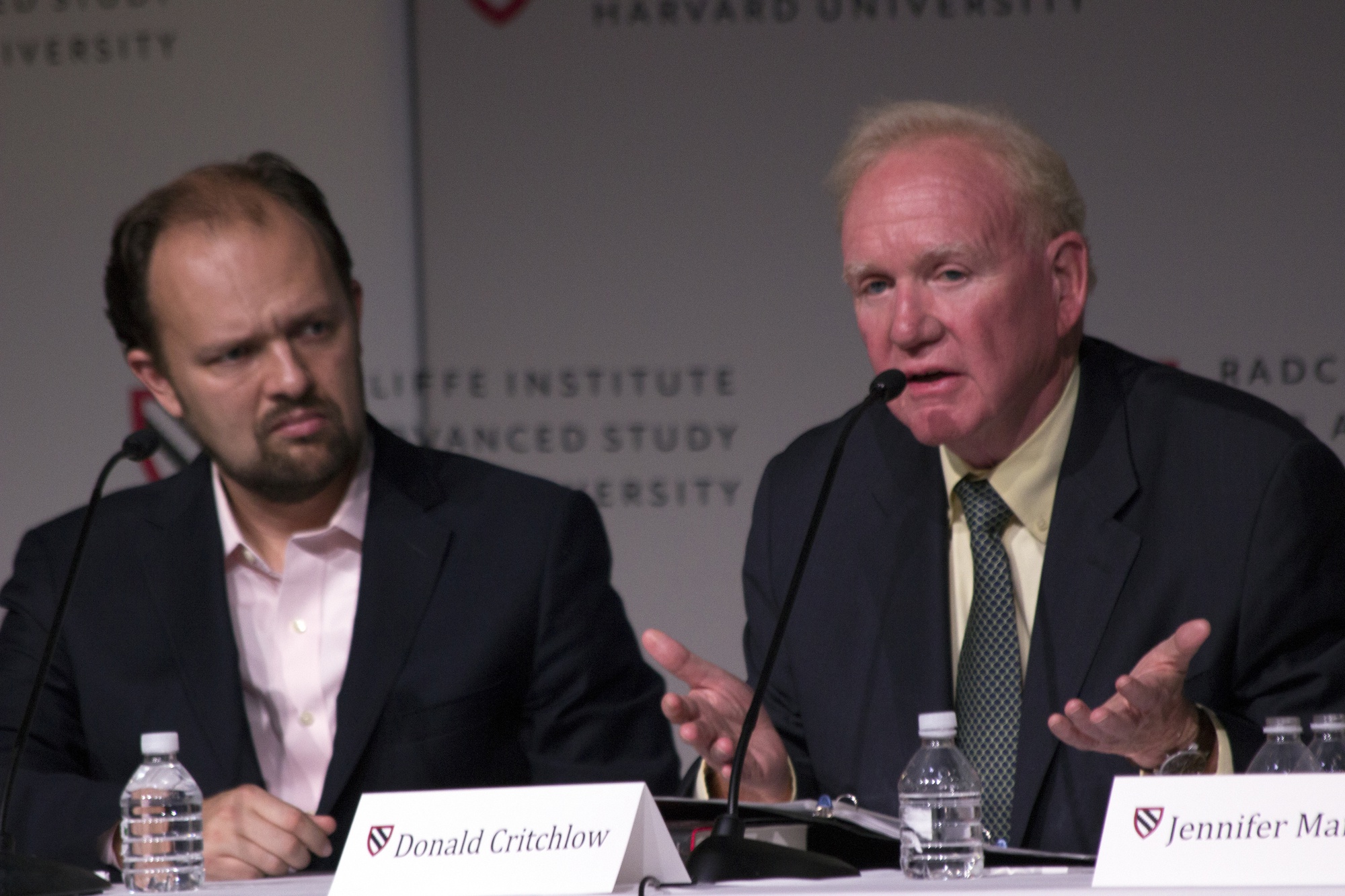 Conservative New York Times columnist Ross G. Douthat ‘02 and historian Donald T. Critchlow led a panel discussion on women’s roles, family values, homosexuality, and reproductive policy at the Knafel Center Monday afternoon. The Schlesinger Library hosted the event as a part of an initiative to create a more complete and balanced history of our times.
By Vedant Bahl, Contributing Writer

The 2016 election cycle has revealed divisions within the Republican Party and put conservative politics in the spotlight.

Against that backdrop, a panel of commentators discussed how current political and societal trends are affecting perceptions of conservatism Monday evening at the Radcliffe Institute for Advanced Study.

The event, called “Righting the Record: Conservatism and the Archives,” featured scholars and activists. It was moderated by New York Times columnist Ross G. Douthat ’02. 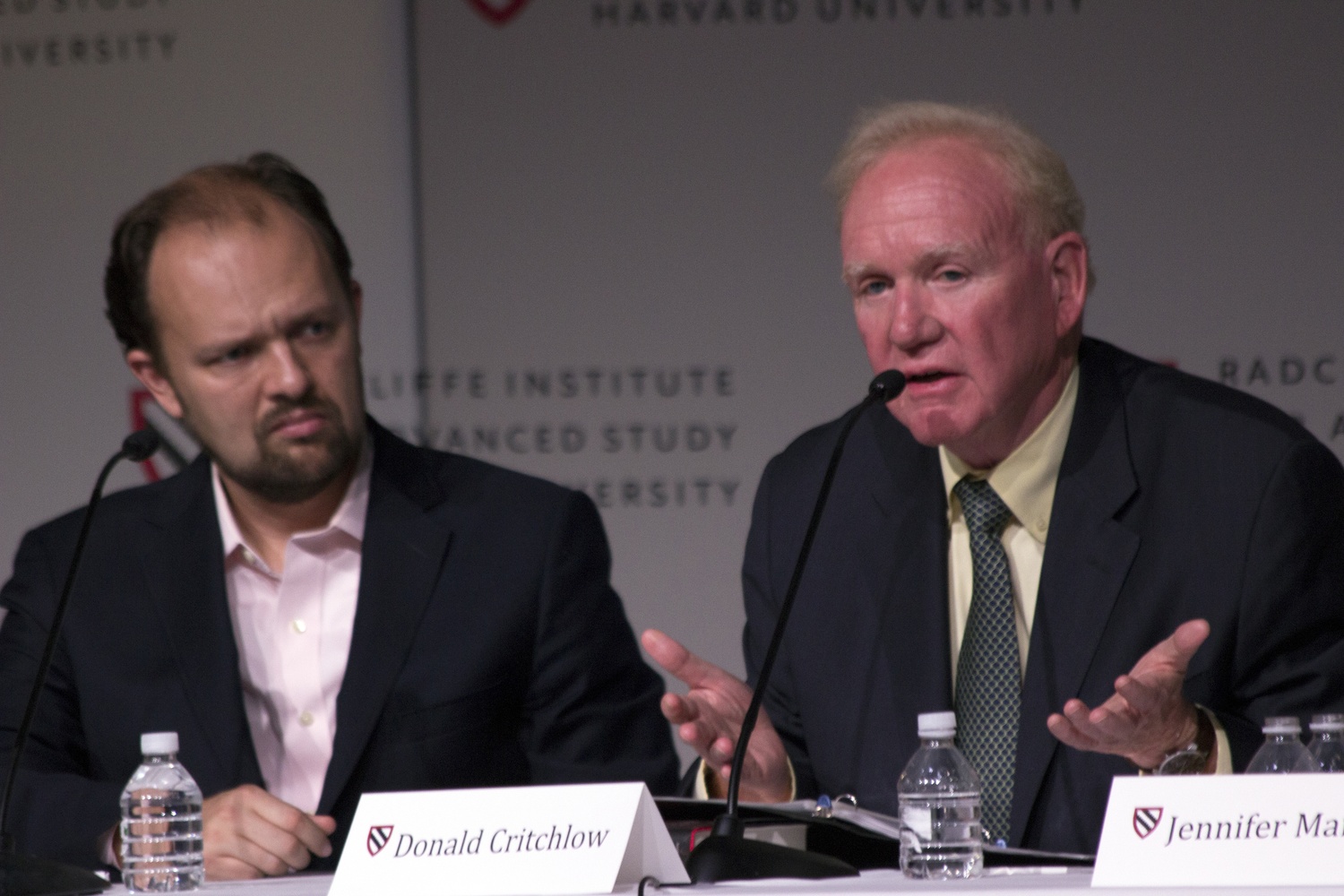 Conservative New York Times columnist Ross G. Douthat ‘02 and historian Donald T. Critchlow led a panel discussion on women’s roles, family values, homosexuality, and reproductive policy at the Knafel Center Monday afternoon. The Schlesinger Library hosted the event as a part of an initiative to create a more complete and balanced history of our times. By Thomas W. Franck

Douthat, a former Crimson columnist, said from the onset that he hoped the discussion would bridge some of the gaps that exist in the historical and popular record.

“People have more limited knowledge than they should of political conservatism, and particularly, religious conservatism,” he said.

In light of the presidential election, much of the event focused on the split between grassroots and establishment conservatism. Michelle Nickerson, who teaches history at Loyola University Chicago, said current divides between Republican presidential nominee Donald J. Trump and other members of the GOP have led to confusion over the definition of conservatism.

“It’s hard to determine who the real conservatives are,” she said. “Historically, we haven’t always been able to differentiate between grassroots and elitist conservatives, which leads us to ask who we want to put forward as representatives of conservatism.”

However, Arizona State University history professor Donald Critchlow had a different take on the election and said Trump has changed political tactics more than the definition of conservatism.

“Figures such as Trump can be conservative, but their political tactics can be separated from their beliefs,” he said.

Beyond the election, Douthat said in an interview that the fact that academia has been dominated by liberals adds to a lack of knowledge about conservatism on college campuses in particular.

Charmaine Yoest, a senior fellow at American Values, a conservative organization, argued that a lack of trust towards conservatives has led to gaps in historical archives and general knowledge.

“The fear of the other, especially in politics, can often harm productivity,” she said.

“There is an increasing problem of having silos and filter bubbles online, where none of us are getting enough info that comes at us,” she said.

But Yoest said there are ways to remedy political polarization. She suggested becoming familiar with different points of view can help bridge the trust gap.

“There’s no shortcut to bridging the trust gap, there is only constant interaction,” she said. “We need to be more intentional in our personal news gathering, to resist the increasing partisan Balkanization we have in our culture, which is creeping in because of the choice we now have in what we consume.”