The School of Design, which operates on a leaner budget than many of Harvard schools, has long been one of Harvard’s smallest schools. Over the past 10 years, the Graduate School of Design’s enrollment has increased by 288 students.
By Theo C. Lebryk 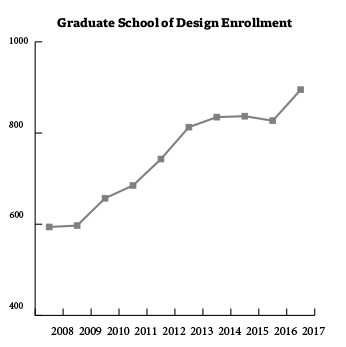 Over the past 10 years, the Graduate School of Design’s enrollment has increased by 288 students.

The School of Design, which operates on a leaner budget than many of Harvard schools, has long been one of Harvard’s smallest. In the five years leading up to GSD Dean Mohsen Mostafavi’s appointment in 2007, the school’s enrollment fluctuated between approximately 540 and 600 students. Under the Mostafavi’s tenure, the population has increased to 895 students.

Landscape Architecture Department Chair Anita Berrizbeitia said this growth has been one of Mostafavi’s biggest initiatives.

“The dean wanted the school to have a bigger voice within the University and contribute to the debates and conversations at the University level. To do that, we needed a bigger student population,” Berrizbeitia said, also adding that Mostafavi also took other measures to increase the school’s presence at Harvard.

According to GSD faculty, while the architecture program has long been the centerpiece of the GSD, the school’s growth has prioritized scaling up other departments.

While the GSD population as a whole has increased in size, not every master's program has experienced the same level of growth. The architecture program, although still the school’s largest, enrolled three percent more students this academic year than in 2006. According to Director of Student Affairs and Recruitment John J. Aslanian, the relative constancy in growth represents a conscientious effort to achieve more parity across the different departments.

“The general narrative is that, when the dean took over, the School was predominantly architecture, both in the number of faculty and the number of students,” Aslanian said. “To his credit, in order to have a legitimate discourse across the disciplines, you need to have a more even distribution of faculty and students.”

Architecture and Urban Planning student Marcus A. W. Mello said the scaling up of different programs has enabled more collaboration between disciplines.

“I think the more perspectives you can bring here, the stronger the work will be,” Mello said.

The most growth has come in the Masters in Design Studies program, whose enrollment jumped from 41 total students in the 2006-2007 academic year to 171 students this year.

Masters in Design Studies Program Co-Director John May attributes the increase in enrollment numbers with a changing professional landscape.

“The nature of the master’s degree within the design fields has changed over the years,” May said. “There are just a lot more people with master’s degrees than there were 30 years ago.”

May added that he believes a master’s degree has become a prerequisite for an ever-rising number of professional and academic jobs.

Diane Davis, chair of the school’s Urban Planning and Design department, agreed with May, adding that the flexibility of the design studies program in addressing societal needs has generated more interest.

“I think it’s growing because it is offering something different that is aligned more with the questions that people and the methods are using now as compared to 20 to 30 years ago,” Davis said.

“In order to continue to be a leader and create the top planners and designers, we need to keep up with the new ideas and new innovations and technologies and thoughts that are on the field and you do that by bringing new people,” Davis said. She added that the school is smaller than other leading urban planning programs, such as the program at MIT.

In addition to student body growth, the School of Design has also seen growth in its number of researchers.

“There aren’t that many other design schools that have that kind of culture in place. It’s actually pretty rare,” professor of Architectural Technology Martin Bechthold said. According the Harvard University Factbook, the GSD employed six “research and other academic positions,” in the 2006-2007 fiscal year, compared to 29 in the 2014-2015 fiscal year.

While the School of Design has expanded, its faculty and students say that growth has not come without its challenges.

GSD Director of Facilities Management W. Kevin Cahill said administrators had to convince the school’s faculty, in addition to the University Provost, the Board of Overseers, and the President, that increases in enrollment wouldn’t decrease in the value of a GSD degree.

While May agreed that continual growth could potentially be harmful, he said he believes the School of Design’s current size does not warrant concern.

“I wholeheartedly agree that a university cannot assume perpetual growth without consequence, but I also don’t think that some amount of growth in a program necessarily means a degree has become less valuable,” May said. “It’s a more complicated problem than that.”

According to Aslanian, the admissions rate has also remained steady because of an increase in the number of applications the school receives.

Executive Dean Patricia Roberts wrote in an emailed statement that the school’s faculty has added 23 full time equivalents since 2007, meaning that faculty growth has occurred simultaneously with student growth. According to Berrizbeitia, studio classes—the core of many GSD programs—are still capped at 12 students.

However, Berrizbeitia said that lecture classes have increased in size and some seminars have become more difficult to take.

“Studio size has stayed small and I think that is the key. If you’re in lectures of 60 people versus 80 people I don’t think that makes much of a difference,” Rubin said.

Some have still expressed concern about not having a space in the GSD’s primary building, Gund Hall. Davis did say it can be difficult for to find times and spaces for classes and lectures.

“The effect is that space is at a premium and that’s a problem,” she said.

The GSD hopes to add an expansion to Gund with the money raised through the capital campaign. In 2010, the School also acquired three properties on the corner of Kirkland Street and Sumner Road, according to Cahill.

Going forward, Roberts said that school will see more growth as the new Masters in Design Engineering program expands to its planned enrollment. She also did not rule out adding additional Masters of Design track. However, both Roberts and Aslanian believe that future growth will no longer come from architecture, landscape, or urban design.

“Program-wise, while architecture is still the largest, it’s no longer the majority of the School. That’s great. It creates a different dynamic. That’s essentially done,” he said. “The new expansion is the new [engineering] program.”