Preview: ‘Far from Noise’ A Journey into Oneself 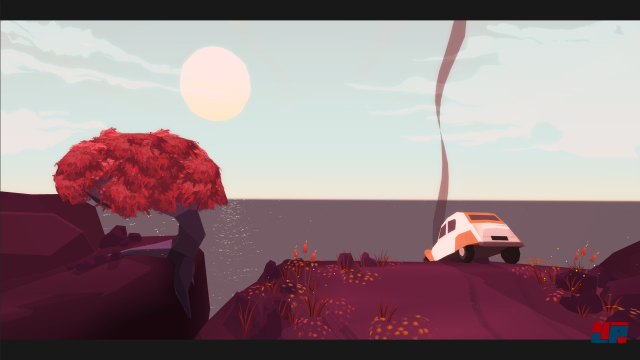 In an era dominated by innovative console gaming, eager fans just can’t get enough. It seems as though every year, every month, a new and exciting idea is introduced to the ever-expanding world of console gaming. Game designer George Batchelor plans to raise the bar even higher with upcoming game “Far from Noise,” which attempts to combine video gaming with philosophy and introspection. In “Far from Noise,” “you play a young woman who is basically stuck in a car that is trapped on the edge of a cliff. All she can do is talk. Talking to herself, rationalizing the situation,” Batchelor says.

That is the premise for the entire game: a woman trapped on the edge of a cliff, awaiting her own death. “Eventually a deer walks in. This story can go in different ways. Ultimately, you start to figure out who she is, why she came out there, if any of it is even real,” Batchelor says. Directed through dialogue chosen by the player, the woman is led down a path of self-reflection, enlightenment, happiness, sadness, and hopefully an appreciation for life itself.

The transcendentalists of the 19th century had significant influences on the development of this game. “It’s based a bit on what I was reading at the time. I read ‘Walden,’ and then some of Emerson’s work. That type of writing, passion about nature, the spirit—that influenced where the story went. It’s quite a central theme of a game. Although she is trapped in this life or death situation, it’s still an opportunity to look at nature and take all of that in,” Batchelor says.

Based on the player’s responses during the conversation, the game goes down one of many possible paths. Each one is unique, with each decision branching from each previous one. However, Batchelor urges players not to mistake the general feeling of the game. “[It] is quite lighthearted. It is very jokey, not that serious. The serious bits are woven into the funny parts. It’s a nice mix, I hope,” he says.

More than anything else, it is a personal odyssey. The game is Batchelor’s expectation-defying attempt to create a 21st century medium through which players can experience the soul-opening effects of truly journeying into oneself. “I want them to see what they think they want to say. And then I want them to see what the other voice in their head is thinking about saying. It’s meditative,” Batchelor says.