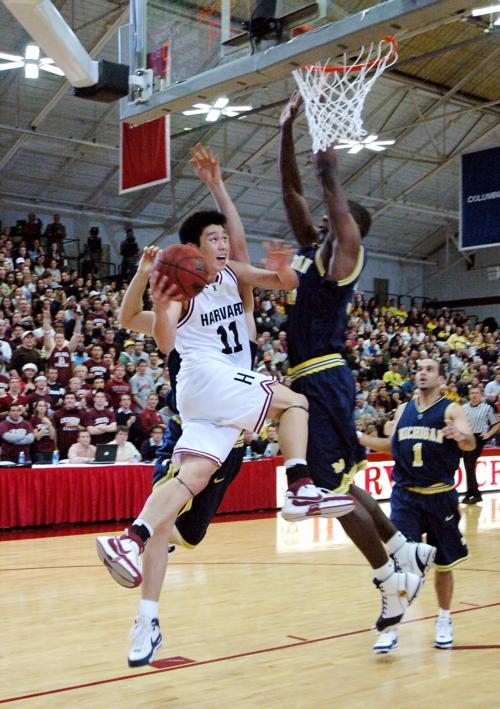 Although this nifty reverse layup didn’t fall, Lin still finished with nine points, none bigger than the jumper that broke the 45-45 tie and gave Harvard a lead with 7:15 left.
By Claire E. Parker, Crimson Staff Writer

Lin, who played for the Harvard men’s basketball team from 2006 to 2010, led the team as a captain for the 2009-2010 season and was selected for the All-Ivy League Team three times throughout his college basketball career. He signed with the Brooklyn Nets in July 2016.

Jeremy Lin '10 goes for the layup during a game in December of 2007 By Hillary W. Berkowitz

In 2012, Lin enjoyed national fame when he led a winning turnaround for the New York Knicks—a run now known as "Linsanity."

“Without question, my time at Harvard prepared me well for success both on and off the court,” Lin said in the press release. “I’m honored to put that same world-class education in reach for deserving students and to support improvements to the facilities where I spent countless hours practicing and competing.”

Lin’s gift is the latest in a record-setting University-wide capital campaign launched in 2013. The Crimson reported last spring that the University had passed its $6.5 billion fundraising goal, and a September announcement put the most recent figure at over $7 billion.

While renovating athletic facilities is not a designated campaign priority, University President Drew G. Faust told The Crimson in an interview last spring that financial aid remains a focal point of fundraising efforts. Harvard has raised $460 million toward undergraduate financial aid as of September—$140 million short of the Faculty of Arts and Sciences goal.

“I find it inspiring to see the commitment to financial aid and Athletics that Harvard College and Jeremy share,” College Dean of Admissions and Financial Aid William R. Fitzsimmons ’67 said in the press release. “His generosity will strengthen the Harvard Financial Aid Initiative (HFAI), through which more than half of our undergraduates receive need-based grant aid.”

Another portion of Lin’s gift will support renovations of Lavietes Pavilion—formerly known as the Briggs Athletic Center—which was built in 1926 and became Harvard’s basketball arena in 1981. The renovations are on track to be completed by the start of the 2017-2018 basketball season.

Harvard men’s basketball has had a successful streak over the past decade under head coach Tommy Amaker, who has led the team to five Ivy League championships and four NCAA tournament appearances during his tenure. Amaker coached Lin for most of Lin’s time at Harvard.

“I was fortunate to have coached such a remarkable person as Jeremy and I truly believe his commitment will allow us to better serve our campus community, energize current students, and excite future Harvard scholars and athletes,” Amaker said in the press release.