22 Days: The Strike That Shook Campus

For both sides of the bargaining table, the historic dining workers' strike was exhausting. But even now that a new contract has been reached, the strike may continue to have lasting ramifications on other negotiations.
By Brandon J. Dixon 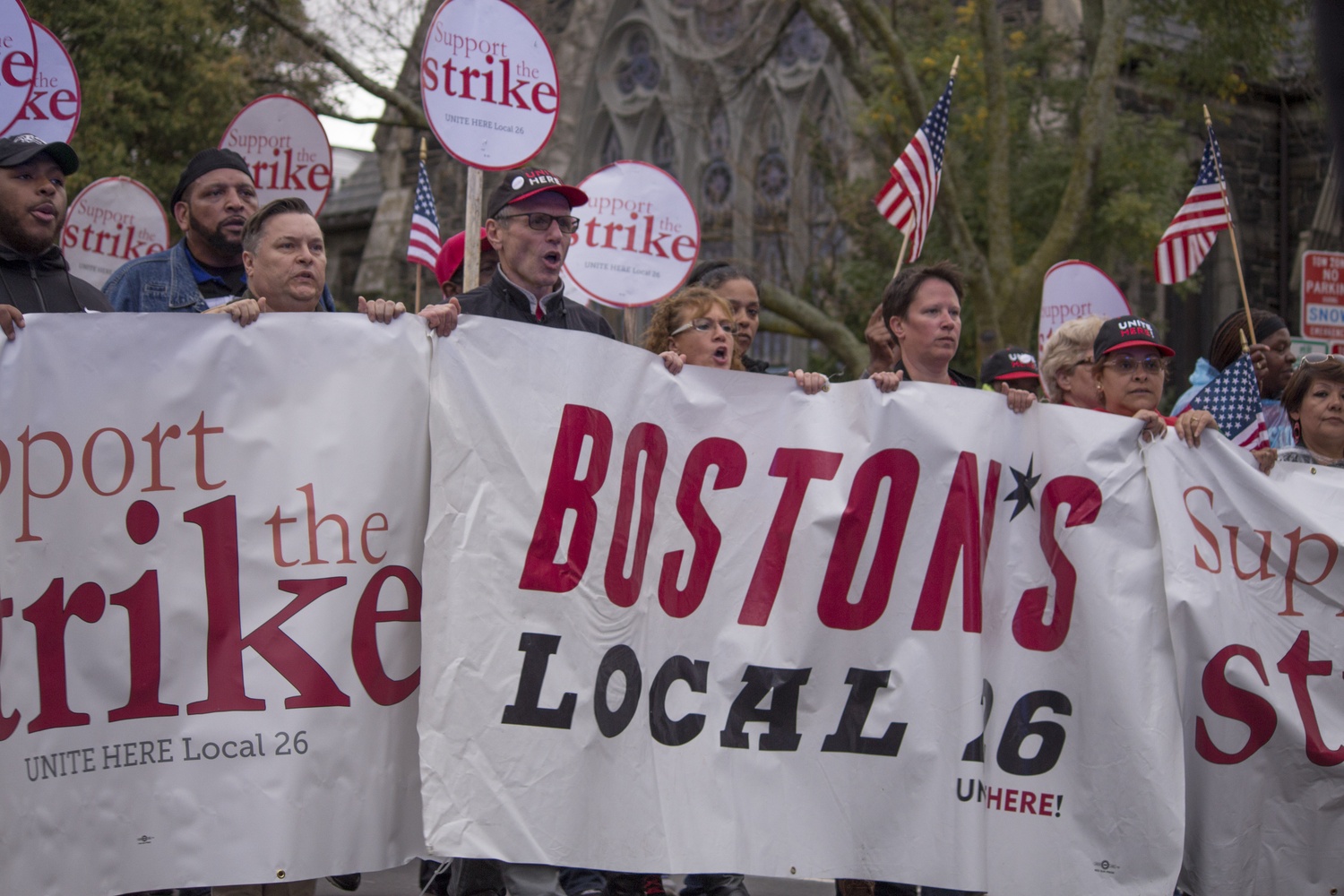 It was nearing midnight and Edward B. Childs, a chef in Adams House who had manned picket lines on campus since 7 a.m., was visibly exhausted. But when asked how he was feeling that night as he marched with other dining workers, Childs said, “energized.”

Earlier that night, HUDS workers and student supporters were asked to leave 124 Mt. Auburn St., where they staged a nearly seven hour-long sit in. Still, Childs and about 15 other workers and students, remained posted outside of the building, chanting and singing protest songs.

They were awaiting news from three floors above, where the bargaining committees for both Harvard and UNITE HERE Local 26—the Boston-based union representing HUDS workers—were parsing through the final details of a contract settlement that was nearly five months in the making. Their bargaining session, punctuated by sudden cheers and rally chants from the people below, dragged on.

By 1 a.m., the two parties reached an agreement. The following day, HUDS workers voted to approve a new five-year contract that addressed their initial concerns about wages and health benefits. Both sides view the settlement as their victory.

The settlement ended a three-week long dining workers’ strike, which rocked Harvard’s campus and shut down nearly half of the College’s undergraduate dining halls. Their strike marked the first time in their history of bargaining with Harvard that the dining workers walked off the job during the academic year.

For both sides of the bargaining table, the strike was exhausting. HUDS workers manned picket lines for 22 days in a row, receiving only $40 per day from their union. University administrators, who maintained they bargained in “good faith” throughout the process, grew frustrated at the workers’ choice to prolong the strike.

In an email to administrative deans after the contract was ratified, Harvard Executive Vice President Katie N. Lapp expressed that frustration.

“We are disappointed that the union only began to seriously negotiate on the main issues of wages and changes to health care during the final days of the strike,” Lapp wrote. “Deeper and earlier engagement by the union could have resulted in an agreement sooner and ensured that dining workers were not without pay for such an extended period.”

Ultimately, Harvard and its dining workers agreed on a contract that effectively established a $35,000 minimum salary for full time employees and curtailed any expected increases in out-of-pocket health expenses for the life of the five-year agreement. They will maintain their health care plan until 2019, when they will transition into the coverage Harvard’s largest union negotiated last winter.

“The agreement represents the fair and reasonable resolution sought by the University,” Lapp wrote. “It includes affordable wage increases in line with those agreed by other unions on campus; compensation over the summer months; and structural changes to health insurance that will align benefits for Local 26 workers with those of other unionized employees.”

While the University characterized the settlement as a favorable outcome, Local 26 said they felt the gains they made could set a precedent for negotiations with other employers.

“A $35,000 annual income is now the standard that we’re going to put forward in all of our campus dining negotiations going forward,” Lang said. “The next one is Northeastern, which expires in August of 2017. We intend to pursue the same program for the other universities—it only makes sense.”

Local 26 may have its sights set on negotiations at other institutions, but two other campus unions currently engaged in contract talks with Harvard are eyeing the HUDS settlement with particular interest.

The first, the Harvard Security, Parking, and Museum Guards Union—which has been bargaining with the University since the summer, when their previous contract was set to expire—has seen relatively little progress. According to Sean McNally, the union’s trustee, they have only met with Harvard seven times since the beginning of their bargaining process. HUSPMGU’s contract, initially slated to expire in June, was extended until Dec. 1 in the hopes that an agreement can be reached before, McNally said.

HUSPMGU represents about 80 employees who primarily work in the Harvard Art Museums. According to McNally, the union is comprised of some of the lowest paid employees at the University, with 50 percent of the union’s membership making $15.47 per hour.

“There’s been a lot of information out there about the living wage in Cambridge, what the dining services workers are making, but unfortunately we are at the bottom,” McNally said.

McNally said that while the union’s goals are similar to those of Local 26, they could not make the same proposals because the details of Local 26’s settlement were released after the union had submitted its offers. While McNally would not detail HUSPMGU’s proposals, he said the union’s overarching goal is to “bridge the gap” in wages between its workers and members of other campus unions, like the Harvard Union of Clerical and Technical Workers.

“Did we model our proposals after Local 26’s? No,” McNally said. “Are we looking for similar things? We’re hoping to keep our health care costs reasonable and manageable, and we’re trying to bridge the gap is the best way to describe it.”

He said the union has looked at the contracts of the eight other campus unions ahead of their negotiations.

32BJ SEIU, which represents Harvard’s custodial staff and security guards, began bargaining in October, and would not comment on how the HUDS settlement would affect their negotiations. Union spokesperson Eugenio H. Villasante wrote in an email that “Local 26 and 32BJ share the same values that lead us every day to make sure we create a pathway to the middle class for thousands of families,” adding that “the path will be determined by the membership, but the goal remains the same: a fair contract.”

According to another SEIU union organizer, Jason Faria, the union has already submitted its proposals for both its janitors and security guards to the University. Negotiation sessions between the two parties’ bargaining units are scheduled for Tuesday, Thursday, and Friday, and on Monday, they rallied in front of Massachusetts Hall to draw attention to their negotiations.

Ahead of the rally, union organizers door-dropped bright orange flyers that invoked the “lessons of the Harvard Dining Hall Strike.”

“We are hopeful Harvard will respond to our demands in a way that provides a path to a fair and peaceful settlement before the expiration of our contracts on November 15,” the flyer reads.