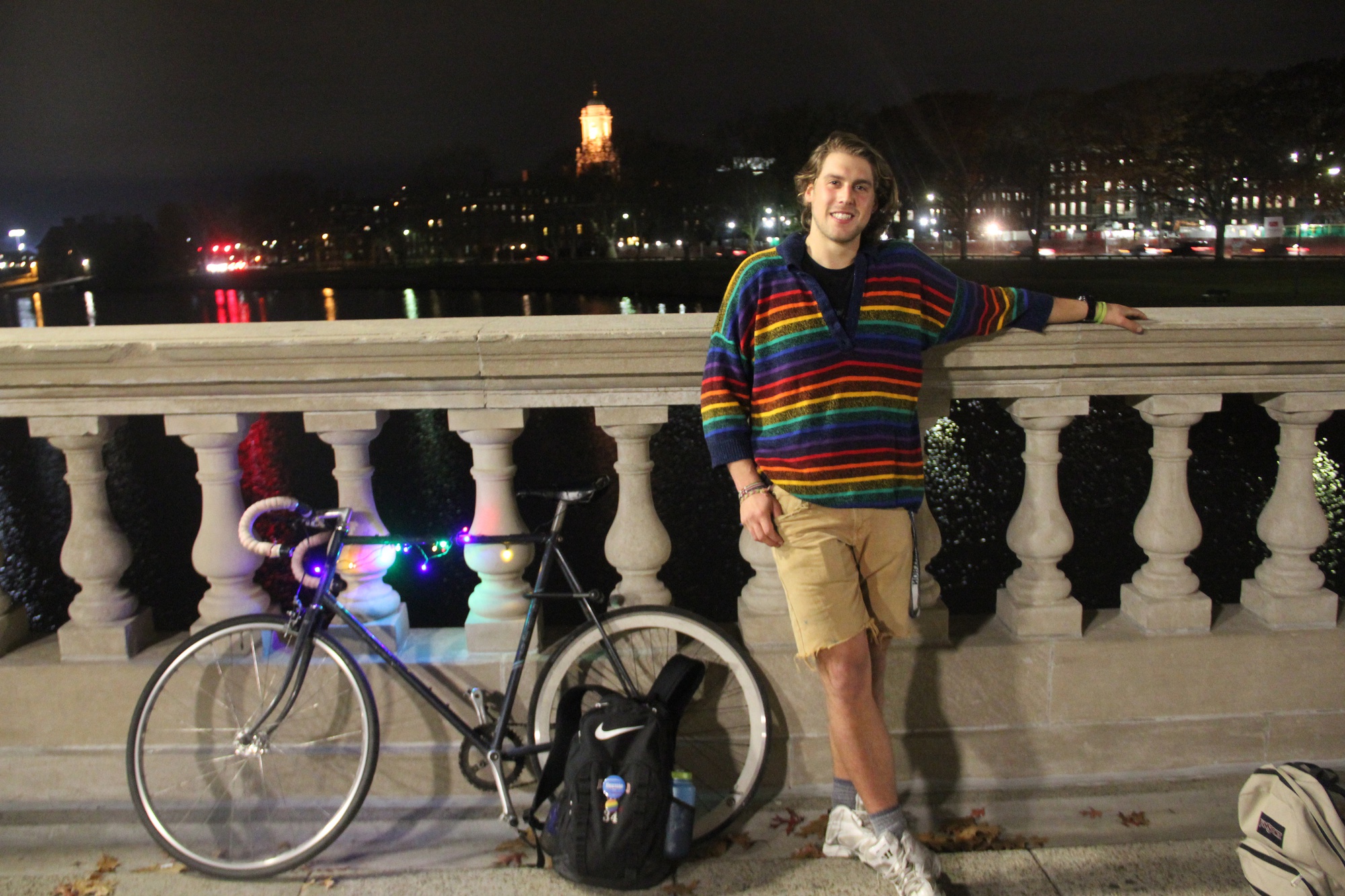 By Andrew W. Badinelli, Crimson Staff Writer
Luke Mendola '17 lives for adventure, and tries as best he can to find it at Harvard. By Isabella S. Beroutsos

If it were possible to trap a free spirit in a human body, the end result would be Luke C. Mendola ’17.

He tells me he likes spontaneity, so perhaps that’s why he asked if we could have our conversation on Weeks Foot Bridge on a Wednesday at 9 p.m. More likely, however, he didn’t even really think about the strangeness of the setting, because when I joke about it, he laughs and responds simply: “I like being outside.”

Mendola, who plays defense for the men’s lacrosse team, lives simply, too. Last year, he decided to downgrade from his iPhone to a Motorola flip phone, which he did in part to unplug from social media, but mostly just to talk to more people.

“If I’m lost somewhere, I can’t look at my phone, so I’m forced to interact with people, and say, ‘Yo, where’s this or that.’” Mendola explains. “Even interacting with strangers, it’s so important to try to brighten someone’s day or say ‘What’s up’ to someone you don’t know, that’s what keeps me going through the day. There’s definitely a feedback loop of positivity.”

To understand Mendola’s commitment to positive interactions with strangers, just ask him about his childhood home in Ithaca, N.Y., a place to which he still feels very connected. Mendola enjoyed spontaneity even then, and, together with the nine other neighborhood kids that made up his posse, would create wacky games, usually out of a desire to “break the monotony of the day.” He recalls taking an old refrigerator box and setting it up on a busy street corner with his friends. One of them would hide under the box with one walkie-talkie, while the rest hid in the nearby bushes with the other. “And every time someone walked by we would yell ‘Go, now!’ in the walkie talkie, and he would shake it and scare the crap out of people. We were like nine years old at the time. It was absurd.” Mendola says, with a smile that suggests little remorse. 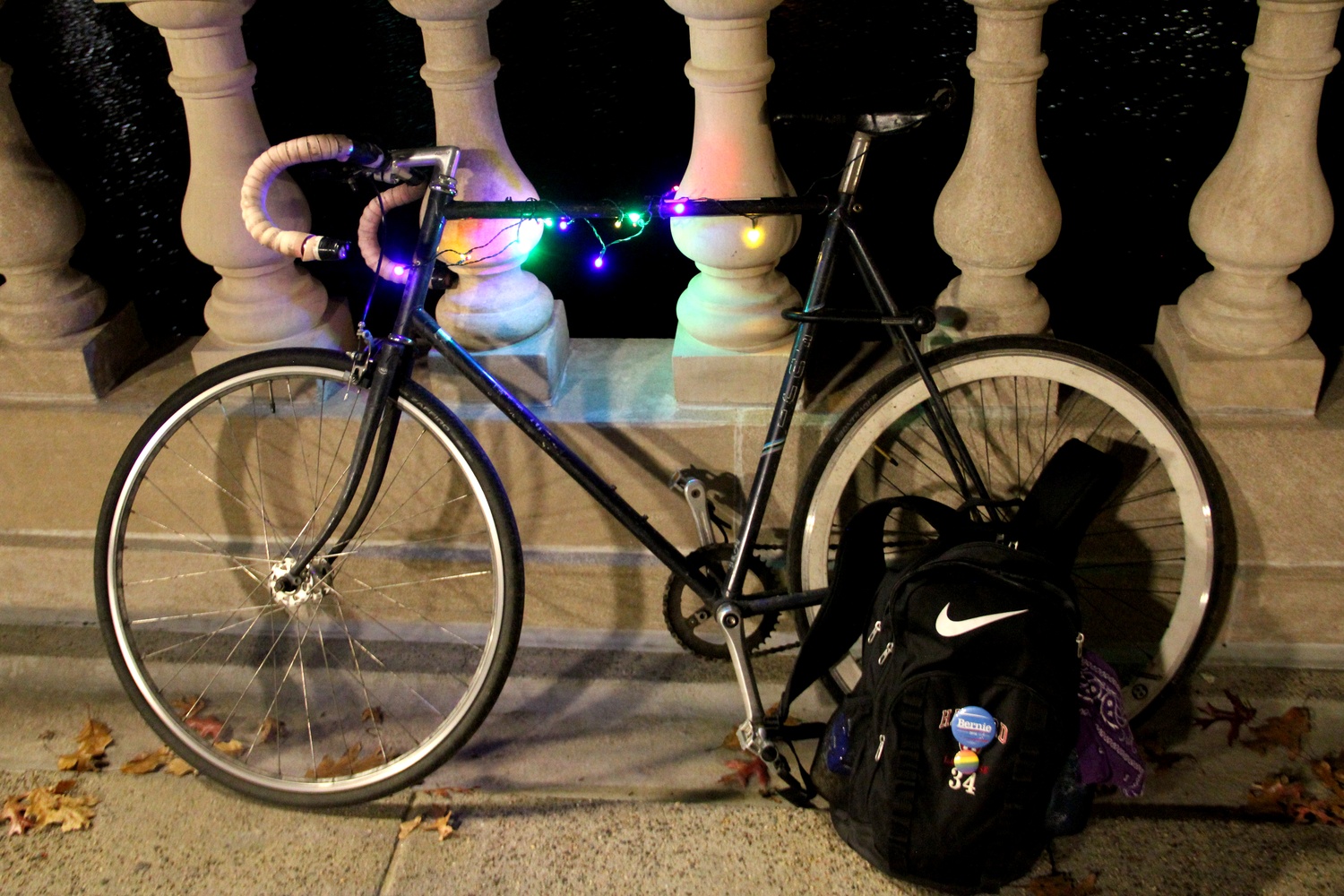 Christmas lights wrapped around his bicycle, Luke is known for his creativity. By Isabella S. Beroutsos

Now, 13 years later, Mendola still keeps things interesting. He carries around a case of eight harmonicas in different keys everywhere he goes, a habit he picked up one summer at camp, where he felt that bonfires lacked a critical musical component. Mendola acknowledges the lack of bonfires around Harvard’s campus, but says his harmonicas still come in handy.

“I bring harmonicas with me wherever I go because you never know,” he says. “There’s been live music here, and I’ve hopped up on stage and [asked] if I could play along or rip a solo.”

Mendola said that when he took up the harmonica, his friends “strongly disliked” his playing, but as he got better, his music quickly became a fixture in their gatherings.

During his time at Harvard, Mendola has also become something of a fixture in his home of Kirkland House. There, not only is he known as the star of a recent Kirkland House Drama Society play, but also as ‘Luke with no plates.’ He stopped using plates in the dining hall at the beginning of his sophomore year, and explains his reasoning to me with a well-honed system of four pillars: “The first pillar is that the tray is just one big plate. The second pillar is that you have to live simply and… all a plate does is separate my food from the other plate… and it provides clutter. The third is, I was dishwasher for a couple summers, and after experiencing that, I would rather just slap off the couple remnants from my tray and throw that in the dishwasher instead of using several plates. And fourth, it’s better for the environment—less plates, less water, less use of resources.”

Mendola’s plan for the future is also structured on “less.” In the short-term, he plans to return to his childhood camp this summer, where he has been a camper-turned-staffer for 15 years. For the long term, though, Mendola is as breezy as the bridge we stand on: “I’ll be poor for the rest of my life as long as I’m making a positive impact on other people’s lives and having fun. That’s what really counts.”