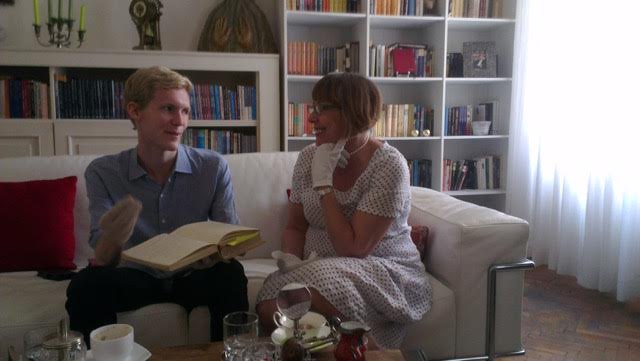 By Colton A. Valentine

I’d been told to “swim” in the intellectual environment, to identify with the author and his sources, rather than scoop out what I wanted with my usual external and surgical precision.
By Colton A. Valentine

“You should read someone else.”

“He’s not too popular here. We prefer foreign authors.”

“‘Dictionary of the Khazars?’ It’s the only book I did not finish.”

For a thesis researcher seduced to Serbia by Pavić’s postmodernist masterpiece, it was a disheartening first day in Belgrade. I had mistakenly assumed my love of Pavić’s writing would be shared by all. Oneiric, twisting, and blatantly erudite, his work sits somewhere between a Gothic cathedral and a Nabokov novel—if both swapped darkness for light. “Dictionary of the Khazars” is the paragon of that style: Composed of dictionary entries, it is a “lexicon novel,” and was thus originally placed not in the fiction section of the bookstore, but next to other language dictionaries, somewhere, we can imagine, between Khakis and Khmer. The work treats the pseudo-history of the Khazar people’s religious conversion, but multiplies it into three contradictory narratives. Each is told from the viewpoint of a different religion—Christianity, Judaism, Islam—and in each, the Khazars select a different faith. There is no center to the text, no answer and no truth, only a series of appendices refuting all that has been said before.

In that sense, it was a bit like my trip to Belgrade.

My sources were different: not religious prophets, but two kind-hearted, sharp-witted graduate students, one oracular professor, Jerkov, Pavić’s sibylline widow, Jasmina, and a smattering of Serbian locals in cafés and bars. Each held a narrative, a cycloptic viewpoint, a singularity I was tasked with combining into my own dictionary. Its entries were often far from literary. It was the most unconventional and unconditionally useful research I could have imagined.

“I always thought he was a local writer,” said a woman I met at a ćevapi joint one night. She was referring to Pavić’s lack of global recognition compared to, say, Salman Rushdie or Jorge Luis Borges. Two days later, Jerkov would counter, “He was absolutely the most European author.” He was reflecting on Pavić’s cosmopolitan sensibilities: a preference for the baroque ornate over the restrained aesthetics of protestant Serbia; a collection of smoking pipes and an apartment in Paris; a mix of avant-gardism and atavism for the “wrong” histories. Jerkov and his students believed that these tendencies made Pavić fundamentally opposed to the nationalist ideology of then-dictator Slobodan Milošević. But in American circles, he is often regarded as a staunch supporter.

“You have to be very stylistic if you want to get to know him,” observed one of the graduate students on Jerkov. Academic knowledge, in these weeks, was transmitted without the same aggressive intentionality I was used to. It came in looping, elliptical conversations. It was less parceled, more personalized. There was a sensibility of lingering over discussions, instead of compartmentalizing tidbits and sprinting to the next marketable meeting. I’d been told to “swim” in the intellectual environment, to identify with the author and his sources, rather than scoop out what I wanted with my usual external and surgical precision.

The stylistics were full-on aquatic by the time we all met Jasmina. I let her direct the conversation, waiting until a word or image surfaced that related to one of my questions. Then I’d lead the discussion toward that idea. It worked about a third of the time, but when it did, it was brilliant. She mentioned Greek mythology, and I asked:

“Why so many truths and so many myths?”

“Because it’s real. But truth, it does not exist…”

“It’s easier, it’s much easier when you look at it one-sidedly," add one graduate student.

“It shows you the way the truth is being created. It’s like truth in process or in progress," said the other.

To give up on objectivity beneath the research scalpel, to accept that the compiler’s appendices create truth instead of discovering it—this is what Pavić teaches the undergraduate researcher. All we can do is gather more entries: the date in Pavić’s journal when he’d selected the lexical form; a professed wish for text to be “like an architectural model or building or cathedral”; his obsession with escaping an authorial role, to “be absent like Homer.”

After my initial talk with Jerkov, I was unsure we would meet again. But I’d prepared a list of disputes and queries on Pavić scholarship and sent it his way. Then, I woke up to a message saying Jerkov would arrive in 40 minutes at the ice cream shop a student had spotted me at the day before. I ran.

When I arrived, he was peering at the interrogative list, but instead of proceeding to the first question, he opted for an anecdote on Yugoslav author Ivo Andrić. “A writer wanted to meet with Andrić and ask him a series of questions,” Jerkov said, as if he were narrating our experience at the ice cream shop. “He arranged the meeting and they began to move through them. ‘This one I cannot answer,’ Andrić said at the first, ‘Oh and this one… that is for another time,’ of the second, ‘The third is compelling, but no one has much of a clue. The fourth you’d have to find someone else.’ Andrić systematically went through each one in this manner, and the meeting adjourned in just a few minutes. I will not do that, but most of these are unanswerable.”

By the end of my trip, I’d accumulated some exceptional entries for the dictionary. I learned that Serbian students are permitted to take exams six times, and they are currently protesting for more chances; that there’s a local preference for periodization (a strict delineation between literary decades disdained by American academics); that despite being a common local crop, cherries are sometimes unavailable because “someone decides to send them to Russia”; that as the epitome of American capitalism, McDonald’s is the first place to be destroyed whenever there are riots; that, in response, the fast-food chain launched an ad campaign celebrating Serbian culture; that, despite all that, it’s still where local kids have their birthday parties.

But any lexicon makes a statement beyond its parts: Like senior theses, they are undergirded with a belief that the world can be mapped and totalized, broken into its components and stitched back together. The postmodern brilliance of “Dictionary of the Khazars” is to rip apart its own foundation, to take perhaps the most controversial ideological systems we know—monotheistic religions—and show how they can and must coexist without unity. Its world is an author-less architecture.

Later, I would travel through other parts of the Balkans, to the Croatian coastline, and then to Bosnia and Herzegovina—where I was told repeatedly and aggressively that Serbia had no cultural history, that the Ottoman Empire should still control Belgrade. When we read postmodernists like Pavić, we tend to summon voguish theory—Roland Barthes’ dead author, Wolfgang Iser’s work on reader response—but the multiplicity of reality is as grounded as bar-goers in Split and Belgrade telling Yugoslavian history in two polemically different ways.

Pavić is not too popular, I think, because he makes serious demands on us as readers to hold these polemics within us—and because singular truth is always easier. In that good meta-fictive tradition of inverting mimesis, his art offers a model for existence. It teaches us to travel between the dictionary entries of our daily encounters, swim in warring narratives, read appendix materials and secondary sources. And yet it reminds us that even the most learned, earnest pedants will arrive at no answer, no author, no God. Just the reality of truth in process, dreaming, from the Balkans to the Barker Center, of progress.