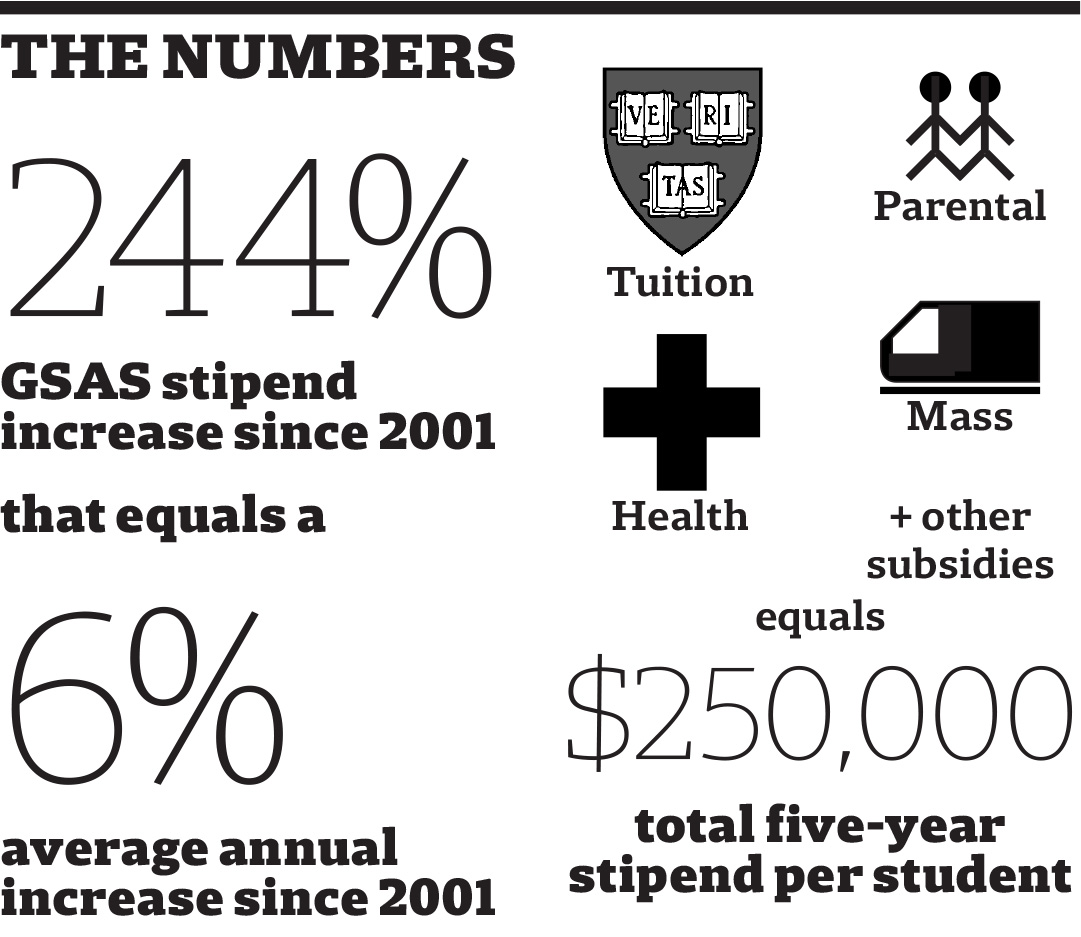 The Graduate School of Arts and Sciences continued to steadily increase Ph.D. student stipends, which have climbed annually by at least three percent for the past six years.

Harvard’s Ph.D. stipends remain on par with those of its peer institutions. Columbia’s graduate student stipend for this nine-month academic year was $26,286. Princeton’s first-year fellowship stipend was $26,450 for a 10-month period.

“When determining the stipend each year, GSAS balances a host of factors as it prepares its financial aid budget, which also includes tuition grants, health insurance, and other benefits and services,” Aloise wrote in an email.

The new $27,600 rate accommodates the 10-month standard living budget that the GSAS Office of Admissions and Financial Aid has estimated. The office estimated the typical unmarried student would need $27,350 during this school year, with $15,000 going to housing.

According to the cost of living index provided by the research firm Sperling’s Best Places, Cambridge’s score is 183, in comparison to a national average of 100. Meanwhile, New York City scored 168, and Princeton, N.J., scored 162. Cambridge remains behind Palo Alto, Calif., which stands at 415 on the index.

However, some peer institutions subsidize housing for graduate students, while Harvard does not. Many graduate students say they have struggled to find affordable housing in the Cambridge area, and are oftentimes forced to move far from campus.

Robert Silverman, a professor at the University of Buffalo and an expert on affordable housing, described Boston and Cambridge as “tight” housing markets comparable to San Francisco and parts of Manhattan because students and University employees vie for housing alongside city residents.

“One of the things our research has been finding is that affordable housing outcomes are better in places where universities agree to link its development and other community benefits to their expansion projects,” Silverman wrote in an email.

Silverman also touched on the different needs of graduate students and city residents when a university expands into a new neighborhood, as Harvard is currently doing in Allston.

“Generally, decisions about affordable housing need to be made proactively and in the early stages of the university expansion process,” Silverman wrote. In late January, affordable housing units built on Harvard-owned land in Allston and leased to a developer by the University were distributed by lottery.

Harvard Ph.D. candidate Zachary B. Nowak, who said he uses his stipend primarily for rent, said the increase is “wonderful.” However, he expressed doubt about how much a three percent increase will help.

“Whether or not it keeps up with the inflation in the housing market in Cambridge and the surrounding areas, I’m not sure. Or the inflation in childcare,” Nowak said. “Those are completely different issues that a three percent increase may or may not address.”

Nowak supports the effort by graduate students to unionize. He said collective bargaining is the only way to ensure students have “a seat at the table for decisions like this.”

“We’re psyched about it, [but] it needs to be in the context of collective bargaining,” Nowak said.

GSAS administrators maintained that they weigh student input in its decisions.

“GSAS speaks regularly with students about their priorities, and stipends are one of many benefits and services provided to them,” Aloise wrote in an email.