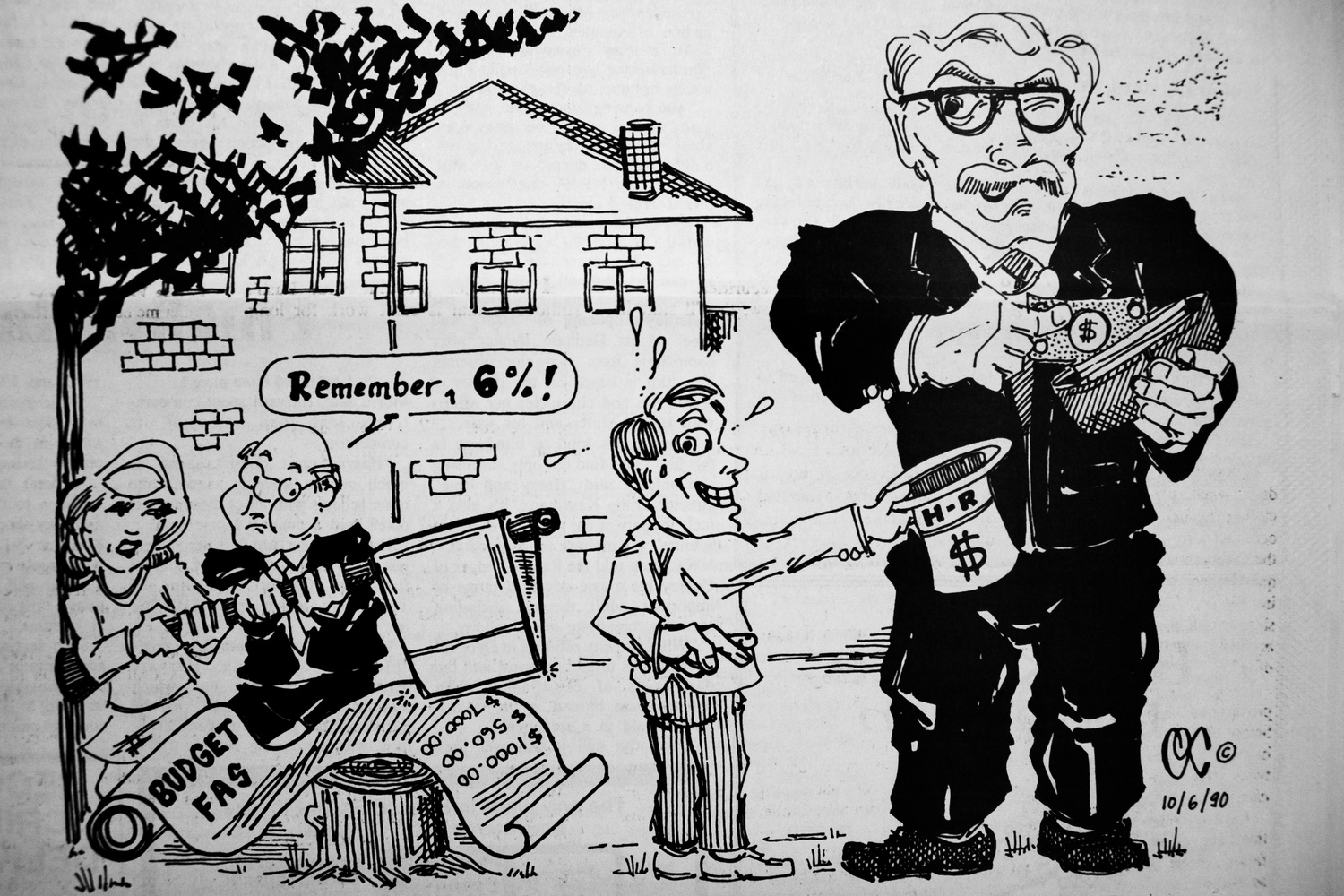 This cartoon appeared in the October 6, 1990 issue of The Crimson with the title: “University Falls Prey to Economic Malaise.” By Crimson file photo
By Kathleen G. Barrow

During the short recession that ended in 1991, characterized as fairly mild relative to other post-war recessions, universities across the U.S. faced financial hardships given increasingly large budget deficits from the late 1980s and early 1990s.

In October 1990, then-acting Dean of the Faculty of Arts and Sciences Henry Rosovsky announced the University’s budget deficit was set to reach over $13 million by the end of the year. Under the previous dean, A. Michael Spence, FAS had used deficit spending to renovate facilities, settle with the clerical and technical workers’ union, and cover financial aid and housing expenditures.

To reduce that deficit, Rosovsky declared a six percent budget cut across FAS, totaling $3 million. Administrators, however, emphasized that budget cuts would not impact undergraduate teaching or the University’s need-blind admissions policy.

“It would be one of our last resorts to cut in areas involved with basic teaching. We want to reach efficiencies with the least impact on services,” then Associate Dean for Finance, Candace R. Corvey, said in an interview at the time of the budget cuts.

While the recession did not alter University aid packages, the Massachusetts state budget cut back on student scholarships. Under Massachusetts Governor William F. Weld ’66—elected in November 1990—the state student aid program was converted to a loan program, and Harvard students alone lost a collective $350,000 in aid.

University budget cuts were instead aimed at reducing department spending and cutting salaries of staff and other employees, namely by eliminating cost-of-living yearly adjustments.

“In essence, it means asking the departments to act as if inflation didn’t occur,” Corvey said in the 1990 interview.

The resignations of University President Derek C. Bok and Spence between 1990 and 1991 heightened the University’s fiscal uncertainty. Bok’s unexpected departure from the presidency, in particular, delayed Harvard’s capital campaign—originally slated to raise $3 billion—by a year.

Despite the expectations for increased capital from the fundraising efforts, administrators were doubtful that the fundraising campaign would have a significant impact on the budget deficit. The money would not provide a permanent cash flow, and education experts at the time said donors might prefer to invest in long-term projects rather than pay off old debts.

“Each year, the deficit has been managed by drawing on the reserves to cover the shortfall. This is a common practice, but one which we cannot rely on indefinitely,” Rosovsky said when he announced the budget cuts to the faculty in October of 1990.

A Change of Plans

As the outside world—specifically corporations and big businesses—cut back on spending and hiring in response to the recession, resources and opportunities for Harvard faculty and students became more limited.

Faculty members, particularly those conducting research in the social sciences and humanities, tended to rely on external capital from foundations to fund their projects. As the economy declined, so too did options for outside funding of research efforts.

The weak economy affected students as well. The high inflation and unemployment rate made the job search especially daunting for seniors graduating in 1991.

A Michigan State University study conducted in 1991 found that, for 1991-1992, graduating college seniors faced a tighter job market for the third consecutive year. The study pointed to the recession, government budget deficit, and impending conflict in the Middle East to explain the low hiring rates.

Harvard’s Office of Career Services also saw an increase in student involvement during the recession.

"In the fall months we saw 15 percent more students than we did the year before. It's been a much busier year. There has been a higher level of anxiety among the students,” Martha P. Leape, who was director of the Office of Career Services, said in 1991.

With fewer jobs available to graduating seniors, many across the country turned instead to graduate school. Applications to medical schools alone saw a 50 percent increase in 1991, according to Leape.

Many members of the Class of 1991, however, remained optimistic that a Harvard degree still held many advantages.

"If it's a ladder, you just bump down one rung, but so does everyone else," Jon M. Biotti '91 said in 1991. "We are still ahead of certain other college grads so therefore everything is relative."

Professor of organic chemistry emeritus Elias J. Corey, who has taught at Harvard for 65 years, said he believed the recession of 1990 and 1991 had relatively mild impacts on the University.

“There were almost certainly adverse effects on some job-seeking graduates,” Corey said. “There were over the years huge adverse economic effects—of the wars, for example…but we have survived and emerged with spirit intact. There are many things that we do well.”

—Staff writer Kathleen G. Barrow can be reached at kathleen.barrow@thecrimson.com.