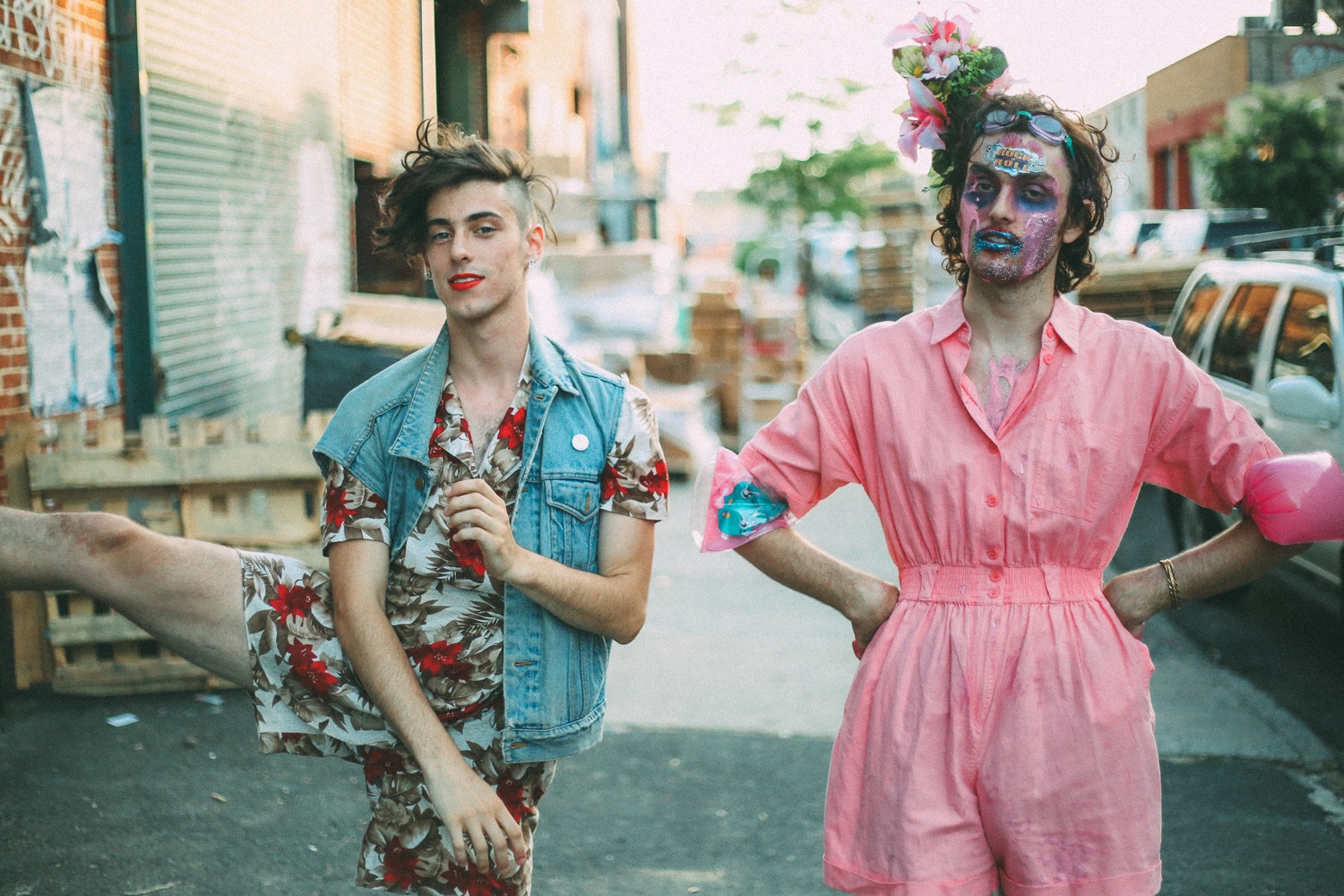 The artists who sang out one of their college email addresses in a song, PWR BTTM are both fierce and thoughtful with a healthy serving of wit. Comprised of Ben Hopkins and Liv Bruce (both of whom use the pronouns they, them, and their), the garage pop-punk duo formed after the two met at Bard College when Hopkins was a sophomore and Bruce was a freshman. Now with two EPs (“Cinderella Beauty Shop” and “Republican National Convention”) and one album (“Ugly Cherries”) in their repertoire, PWR BTTM came to Boston back in June to play at The Sinclair. Hopkins and Bruce found time to talk with The Crimson about the development of the band, gender-neutral restrooms, and reality television.

The Harvard Crimson: In college you, Ben, studied theater, and you, Liv, studied dance. What prompted you to go from those forms of performance art to music?

Liv Bruce: Before PWR BTTM, I was in a few other bands in college and playing the drums…. But I guess people will sometimes say to me, “Oh, you dance and you play the drums, but that’s so different.” And I was always kind of like, “They are?” They are similar cognitive processes with radically different contexts. They’re both kind of the same thing. It was always interesting to me to have both of those lens through which I could analyze the performance I was in. What I mean is that whenever I would be playing a show with my band, I felt like a drummer but also very much like a dancer. And when I was in ballet class performing a dance piece, I felt very much like a dancer but also like a drummer. So those two always kind of went hand-in-hand for me.

Ben Hopkins: Oh well, you know, it’s funny. They are all similar—that’s the thing. They are all just sort of different iterations of performance. I know that sounds really pretentious, but it’s all performance to us. We went to a college that is incredibly interdisciplinary… so the idea to just start a band was not really foreign to us, and it was just another kind of making art…. So when Liv asked to [form a band] at the gym, [I was] like “Sure, why not?”

THC: When you started PWR BTTM, did you ever think it would become this big?

BH: Hell no. We never ever thought that it would be anything at all like what it is, but we’re elated that it is what it is. When we started the band, it was supposed to be for one show, this festival thing that actually never ended up happening…. And yeah, we just kind of kept doing it and kept working on it, and then the record just kind of got bigger that what we could have imagined. And we’re so lucky that it did. [Performing in a band] just sort of felt like my calling in life—like, the thing I love to do the most in the world is performing in PWR BTTM. So yeah, it’s really goddamn cool.

THC: What has it been like going from playing college shows to releasing a debut and going on tour?

LB: It’s been great. It’s been very fun. When we first started, the feeling was that we were playing—not playing the way you play a guitar but playing the way kids play dress-up or Legos. And I still kind of feel that way. It’s just also our job now.

THC: What can people expect from your live shows?

LB: I think we strive to create a face of radical possibility, and that can mean a few different things depending on… what feels radical to someone…. We also strive to make our shows inclusive and safe, which are two concepts that go hand-in-hand for all people. We also try to make it something that—how do I say this? We try to make our shows an experience for us, so that they will be an experience for the crowd. It’s an easy trap to fall into as any performer to just go through the motion, and I think we both try in many ways to make sure that’s not what we’re doing.

THC: I’ve heard that you include gender-neutral bathrooms as a part of your rider? What prompted you to do that?

BH: Our gender-neutral bathroom policy—we sort of came up with it early in the year [of 2015], and we started implementing it last November. But we thought of it as a point to show a venue that had very sexist bathroom signs… that made me and Liv uncomfortable and people who were coming to our shows, who were maybe trans or gender nonconforming, very uncomfortable…. So yeah, basically we have a lot of fans who are gender nonconforming, and we wanted to make a safer space for our people to perform at.

THC: What are your thoughts on the intersection of gender performance and stage performance, particularly in the context of the gendered performance that you do?

LB: I know that personally I was drawn to an aesthetic that was more kind of recognizable as drag to the public when we started, and then I fell away from that and became more interested in dressing how I wanted to dress. I started noticing the way that musicians who weren’t necessarily queer identified still had a difference between the way they looked when they showed up at the venue and the way they looked when when they appeared on stage, and I was kind of more interested in figuring out what that meant for my specific perception of own gender and identity.

BH: Well, I think that the idea of performing gender is something that comes up in queer performance a lot as a centralized performance... but if you contextualize that in what we do, there’s a lot of sort of making fun of the inherent idea of what gender is…. It’s the kind of thing that if Keith Richards and Mick Jagger can wave their cock around in this sort of feminine-but-not, hyper-masculine performance, [and] if Gene Simmons can put fucking KISS make-up on and shit, it’s not that ridiculous for me as a queer person to put on a dress and have hairy legs and be very obvious about my gender performance.

THC: Who or what inspires your music?

LB: I love and hate this question because I always leave someone really important out…. I mean, I can list bands, but I feel that all of pop culture was a big influence on me in general. The bands that I listened to when I was younger were, like, Bloc Party, the Dresden Dolls, Mars Volta, Beck… but I’m just as much influenced by those bands… as I am by, like, reality television, or video games. Those things definitely influence the way I see the world and the way I put things into the world.

THC: Could you expand a bit on how you’re influenced by reality TV?

LB: For the people who are on the reality show, they just kind of have to be themselves but be a more exaggerated version of themselves, which is kind of what I do when I’m writing a song. I, like, take this little inkling of a feeling and just exaggerate it. And [for] the editors of reality TV, their job is to basically take life and distill the most interesting things from it and… craft a simple narrative that can be told in 30 minutes—21 really—out of what is a lot more time and a lot more complex.... Both [instances] are really good ways to describe what it feels like to write a song. It’s like, “Let me take this really intense, complex, drawn-out thing that’s been happening in my brain for six months or 18 years or whatever—depending on the song—and condense it into 12 lines of text that happen in two minutes.” To me that’s very similar to making a reality show.