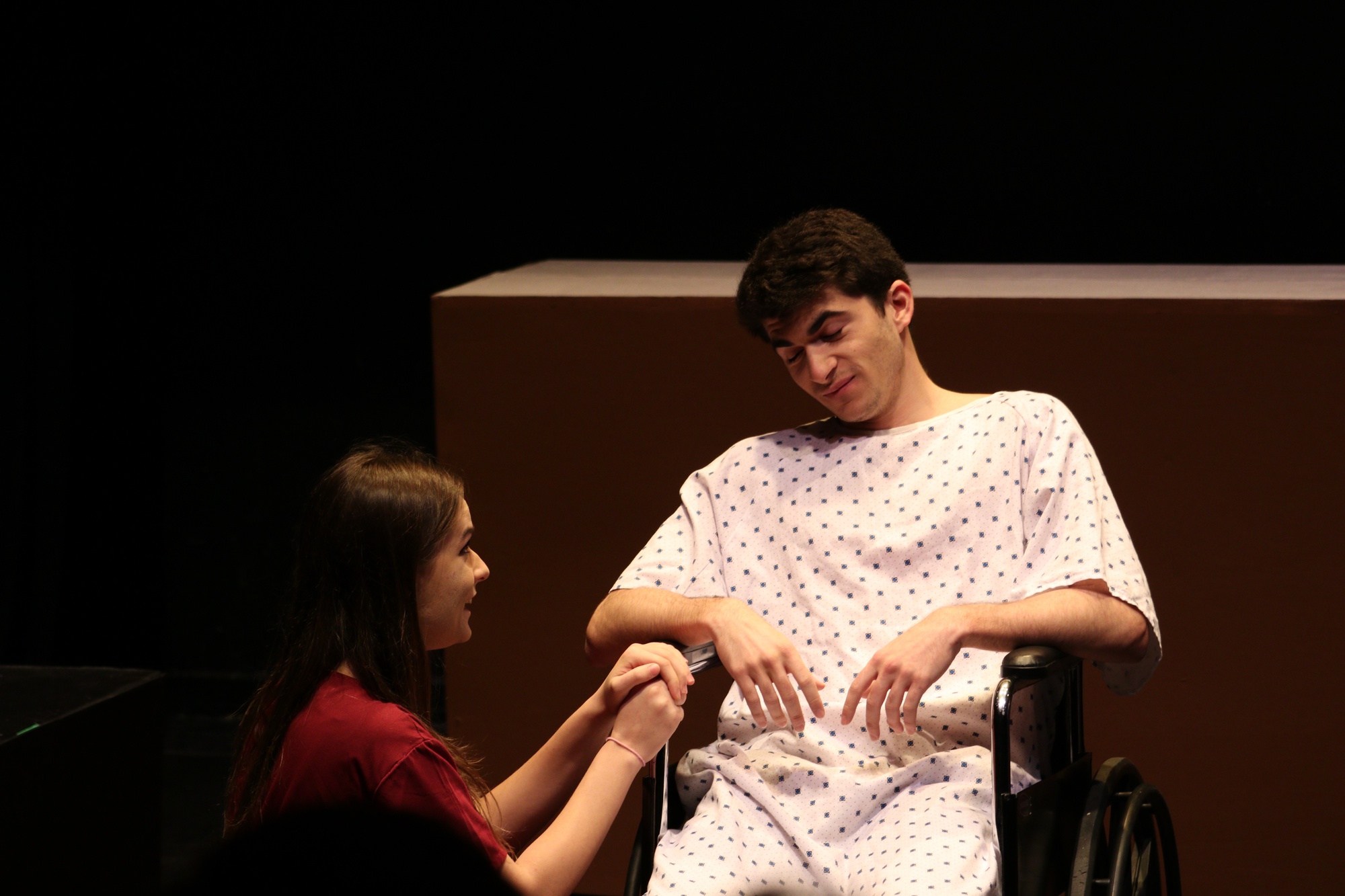 Frank Steins is an original play from Brandon Martinez about a man with severe physical impairments and how he interacts with his community.
By Melissa C. Rodman, Crimson Staff Writer

How might a cast and crew stage different forms of disability for contemporary theater audiences? How might those theatergoers respond to the approach that a given production takes? And what might all of the people involved—behind the scenes, onstage, and in the audience—learn in the process?

These are important and timely questions, percolating through both scholarly and popular discourse on including, valuing, and exploring a variety of human experiences in the theater. In the last few months, productions like Manhattan Theatre Club’s “Cost of Living” by Martyna Majok and Sam Gold’s Broadway revival of “The Glass Menagerie” by Tennessee Williams have generated critical buzz for casting both disabled and able-bodied actors to tell difficult, viscerally wrenching stories. Other recent plays, in contrast, have featured well-known, able-bodied actors as their eponymous, physically disabled protagonists, such as Bradley Cooper in “The Elephant Man” and Daniel Radcliffe in “The Cripple of Inishmaan.” Still other shows, like the musical “Side Show” and Deaf West Theatre’s revival of “Spring Awakening,” have brought together music and issues of disability, to varying degrees of box office success. I flag these examples not to critique one approach or another, but rather to illustrate that directors have responded in many ways to the ongoing questions about staging disability.

“Frank Steins,” an original play by Brandon Martinez ’20 that ran at the Loeb Experimental Theater from Nov. 9-12, likewise placed a disabled character at the heart of its story. The title “Frank Steins” seems to allude to the novel “Frankenstein,” although the play never fleshed out that parallel. Presented by Harvard College TEATRO!—in conjunction with Harvard College Disability Alliance, the Harvard-Radcliffe Dramatic Club, the Office for the Arts, and the Undergraduate Council—and in partnership with Partners for Youth with Disabilities, the play centered on the young man Frank Steins (Agustín A. Rodríguez López ’19) and his physical disability (which, we learn sporadically, is Duchenne muscular dystrophy). The play also highlighted the internal struggles of Steins’ mind, played by Janiah Lockett ’20, and the inability of his parents and assisted living caregivers to understand and communicate with him and with each other. “Frank’s in a place in his life where he needs love and support; and everywhere he turns, he sees no one there, no community that loves him,” Martinez writes in the director’s note.

Shows like “Frank Steins” do not present the audience with burdenless characters and carefree plotlines. Instead, this theater is hard to wrap the brain around, often convoluted in the delivery of its messages, and even sometimes downright skeevy to watch. It is challenging, for example, to suspend disbelief when López, an able-bodied actor, often broke character, standing up from Steins’ wheelchair to help the small cast move some of the props offstage. Were considerations made to cast a disabled actor in the role, and how would that choice have affected audience response? It is uncomfortable to hear trite platitudes spouted by Frank’s mother, Mary (Ekemini Ekpo ’20), as she attempted to emancipate Frank from the assisted living facility. Logic-wise, why she allowed him to go there, despite her ensuing ire for the place, I think I’ll leave for another time. It is unnerving to see how the blocking of this play required the limping, war veteran Doctor (Shannon Beattie ’20) and the cocky and grating Eamon Star (Francisco J. Cernada ’20) to drop Frank with a thud on the Loeb Ex’s floor, as they failed to lift him from the wheelchair to his bed offstage. Doesn’t that fall hurt him?

Such voyeuristic discomfort cannot be explained away as merely the result of Martinez’s long-winded approach to staging disability in “Frank Steins.” Indeed, this play, like some others, seems to present knotty issues—change, choice, circumstance—to the audience so we can grapple with them long after the curtain falls. I can't help thinking about a sentence from Zora Neale Hurston’s novel “Their Eyes Were Watching God” here. Swapping Hurston's “years” with “plays” for our purposes, Hurston writes: “There are [plays] that ask questions and [plays] that answer.” It seems to me that some productions which attempt to stage disability for contemporary audiences fall into the former category, posing thought-provoking, perhaps sometimes unresolvable, questions.

—Crimson staff writer Melissa C. Rodman can be reached at melissa.rodman@thecrimson.com. Follow her on Twitter @melissa_rodman. She is writing a senior thesis on staging disability in contemporary American theater.