The Only Show in Town: Wurf's Adventure Revisited 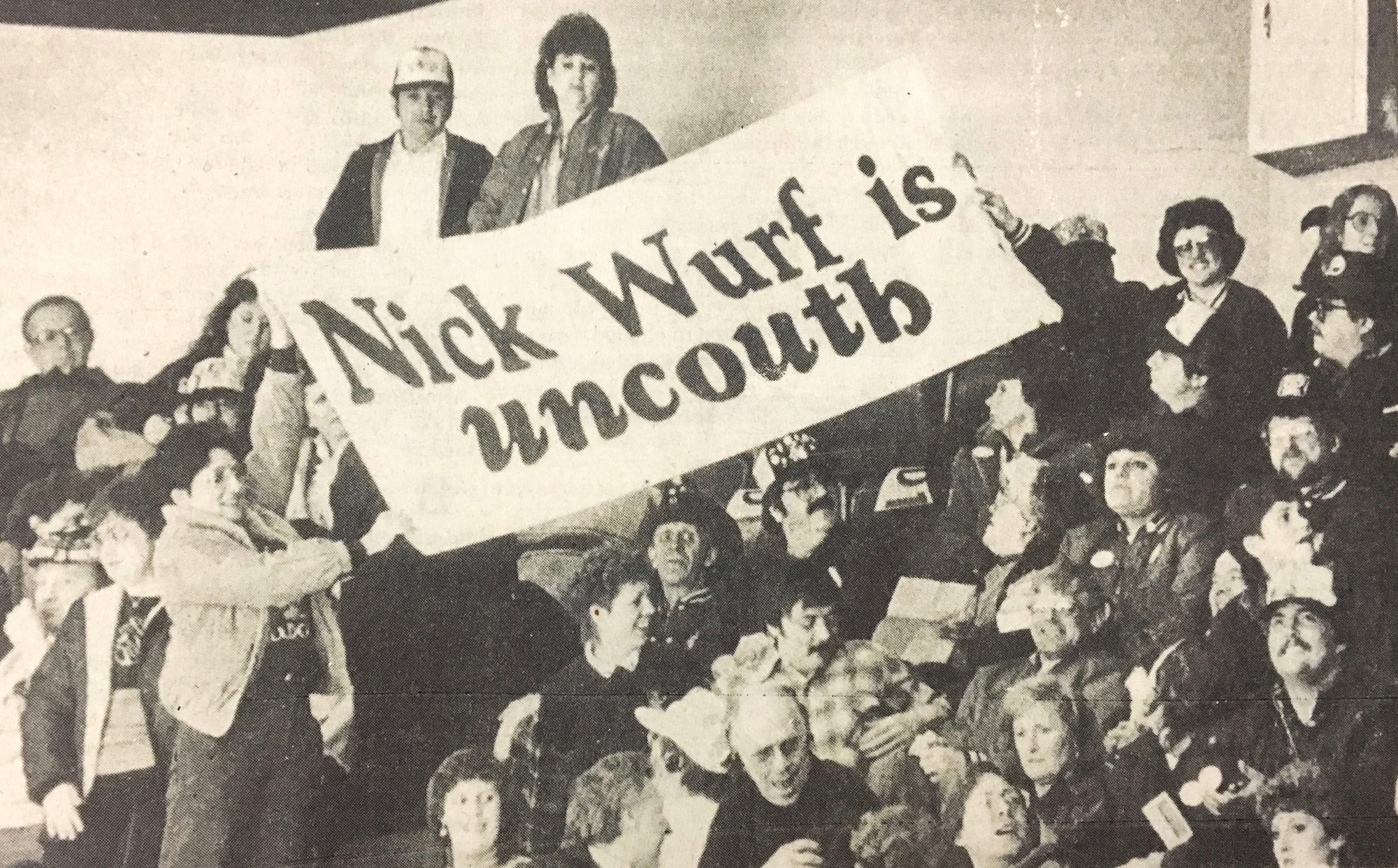 Minnesota-Duluth fans heckled Nick Wurf throughout the night as the Harvard men's hockey team squared off against the Bulldogs in the spring of 1985. By Courtesy of Duluth News Tribune & Herald/John Rott
By Jake Meagher, Crimson Staff Writer

CHICAGO — “Tread carefully in the Midwest when you come with your coastal biases,” warns Crimson phenomenon Nick Worth ’87. “You never know what you might step into.”

Way back when, the NCAA Men’s Hockey Tournament forced teams like Harvard to enter the belly of the beast for its games. And sometimes the Tournament even forced Crimson writers to do the same.

Just ask Worth, the man behind one of The Crimson’s most well-circulated stories to date. The last time Harvard met Minnesota-Duluth—its Frozen Four opponent tonight at the United Center—in the NCAA Tournament, the year was 1985, and Harvard had to travel right into the heart of Duluth. As did Worth, The Crimson’s men’s hockey writer of the era.

Originally, two opponents were just supposed to play hockey. A quarterfinal series between the two teams would determine who moved on to the stage of the tournament we now call the Frozen Four. But the sideshow that ensued back in 1985 ranks among one of the wildest and wackiest events in the history of both Harvard Hockey and The Crimson.

“You don’t grow up thinking you’re going to be the villain,” he said this week. “And I turned out to be one.” 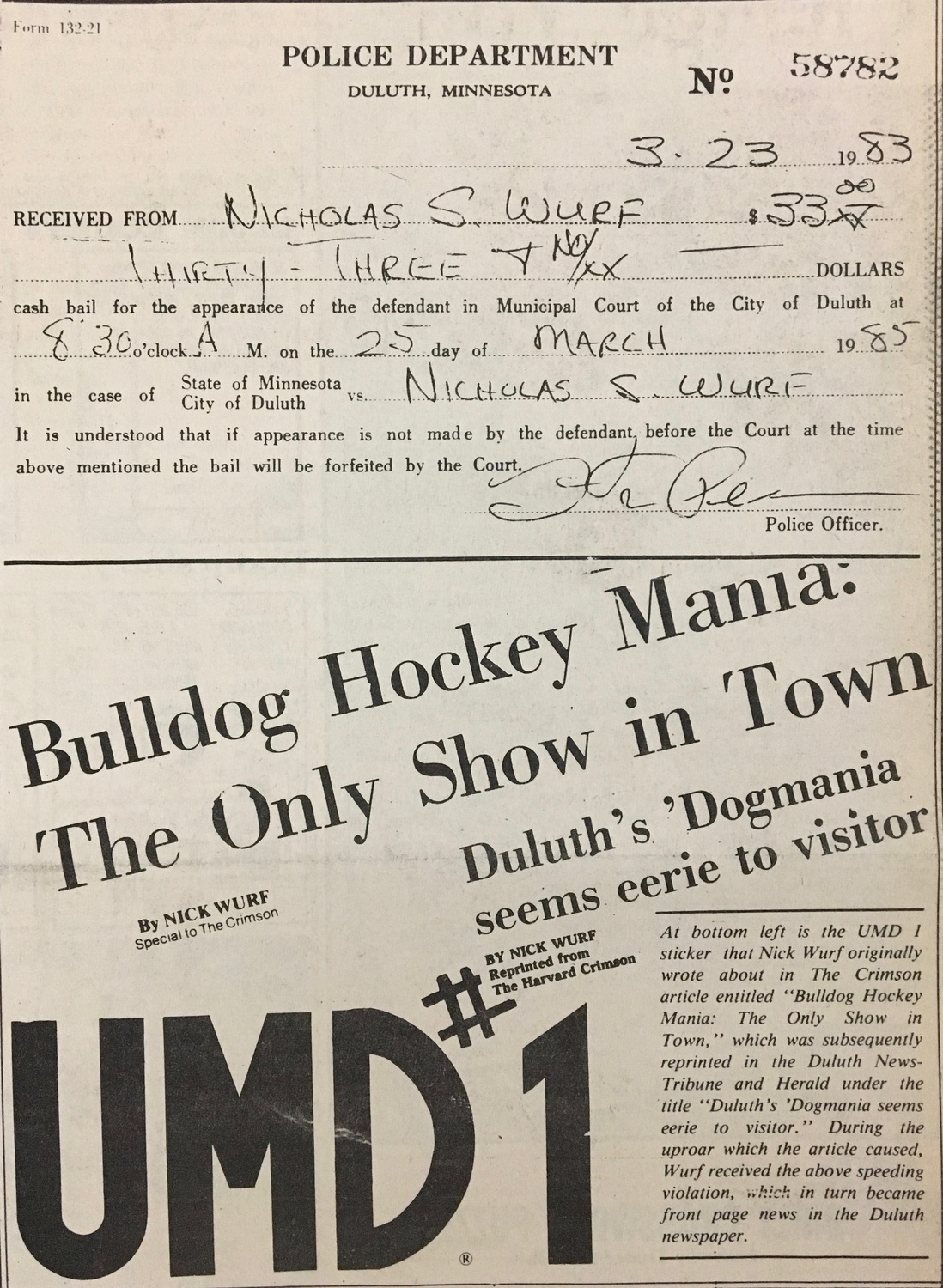 Included here is a copy of Nick Wurf's speeding ticket and a copy of the "UMD #1" sticker that Wurf writes about. By The Harvard Crimson

The madness started with stickers. Upon arriving in Duluth on March 20, 1985, Worth couldn’t help but see them everywhere. “UMD #1” was plastered on everything from businesses to cars to private homes.

“You half expect people to have them strapped to their pets,” joked Worth in his infamous Crimson piece titled “Bulldog Hockey Mania: The Only Show in Town.”

Worth was startled by the differences he saw between Cambridge and Duluth, specifically when it came to the importance each granted to college hockey. He admitted that lack of on-campus support for the Harvard hockey team was “sometimes frustrating.” But in this foreign land where hockey ruled supreme, he wrote that he found it “pathetic to see a town so consumed over so little.”

The story ran in the Thursday edition of The Crimson, and was quickly discovered in Cambridge by the late Joe Wright ’85, a Duluth native eager to read a story he had found involving his hometown Bulldogs. As it turned out, Wright wasn’t a fan.

Wright contacted the News-Tribune & Herald in Duluth, which received permission from The Crimson—then staffed by current CNN President Jeff Zucker ’86—to reprint on Friday what would soon become known in Duluth simply as “The Article.”

Worth was awoken Friday morning by a call from a TV reporter. Unaware that his article had been reprinted, Worth agreed to do an interview. “You don't have to ask me twice to be on TV,” he wrote.

When the reporter arrived at Worth’s hotel room, Worth commended her for finding his article in The Crimson. Only then was the truth revealed.

“It was reprinted, [and The Crimson’s managing editor] didn’t think much of it—he certainly didn’t contact me in Duluth to let me know,” Worth recalled. “Of course he would’ve had to call my hotel. There was no other way he could’ve gotten in touch with me back in 1985. He certainly didn’t do that, so I was blindsided.”

The story quickly garnered the attention of the entire city—home to almost 100,000 citizens and of course, two hockey teams.

"When I got up, I was alone in the house, except for the dog,” UMD coach Mike Sertich said. “And the dog was barking at the newspaper."

Harvard coach Bill Cleary ’56 was no happy camper either. After Worth finished collecting his interviews with a Crimson contingent Friday, Cleary pulled the sophomore aside—something he had never done before—and according to Worth said the following:

“We were going to sneak up on these guys, and you blew it for all of us. Now I’ve got to get up and apologize for you, and you know better than that.”

“He made me feel about six inches tall, which I completely deserved,” Worth continued. “He said it in more of a fatherly way than anything else. I looked up to Bill, so I was really disappointed that I’d let him down because he was a good guy trying to get things done.”

Harvard did wind up being swept in the series, but of course, hardly anyone truly believes that Worth had an impact on the outcome. In fact, future Hobey Baker winner Lane MacDonald ’89, who was a freshman on the 1985 Harvard team, thought the atmosphere stemming from the fiasco was great.

“While it gave them something to rally around, it didn’t change the outcome of the game,” MacDonald said. “It made it fun because they were really into it. It’s like going to Cornell and playing. When the opposing fans are really into it, it creates for a fun environment.”

The crowd pulled out every stop. Chants of “Who’s Nick Wurf?”. Messages on the electronic scoreboard. Even sign content generated straight from a thesaurus: “Nick Wurf is Uncouth.”

“There was about one full section of people at our game at Duluth that year who were wearing pink polo shirts with the collars turned up making fun of us,” tacked on a chuckling MacDonald.

“It was entirely surreal,” Worth said. “I couldn’t believe that I had genuinely become the focus of attention for a community and a lightning rod for all their frustrations.”

For Worth, the experience didn’t end there. The sophomore was clocked for doing 45 in a 30 that weekend, prompting The News-Tribune & Herald to run a front page story entitled “Harvard writer contributes to Duluth economy.” The booking also provided The Harvard Lampoon, and its leader Conan O’Brien ’85, an opportunity to get involved.

“Conan was a clever guy,” Worth said. “They stole The [Crimson’s presidential] caricatures, we couldn’t find them, and I think they eventually turned up at the Duluth Police Department, which was of course not super keen to send them back to The Crimson, which was not the most popular institution for the [DPD].”

Tonight’s latest Harvard-Duluth installment likely won’t generate the same sorts of storylines it did in 1985. And that’s probably for the better. But maybe if we’re lucky, we’ll still be able to see a sign that reads “Nick Wurf is Uncouth.”