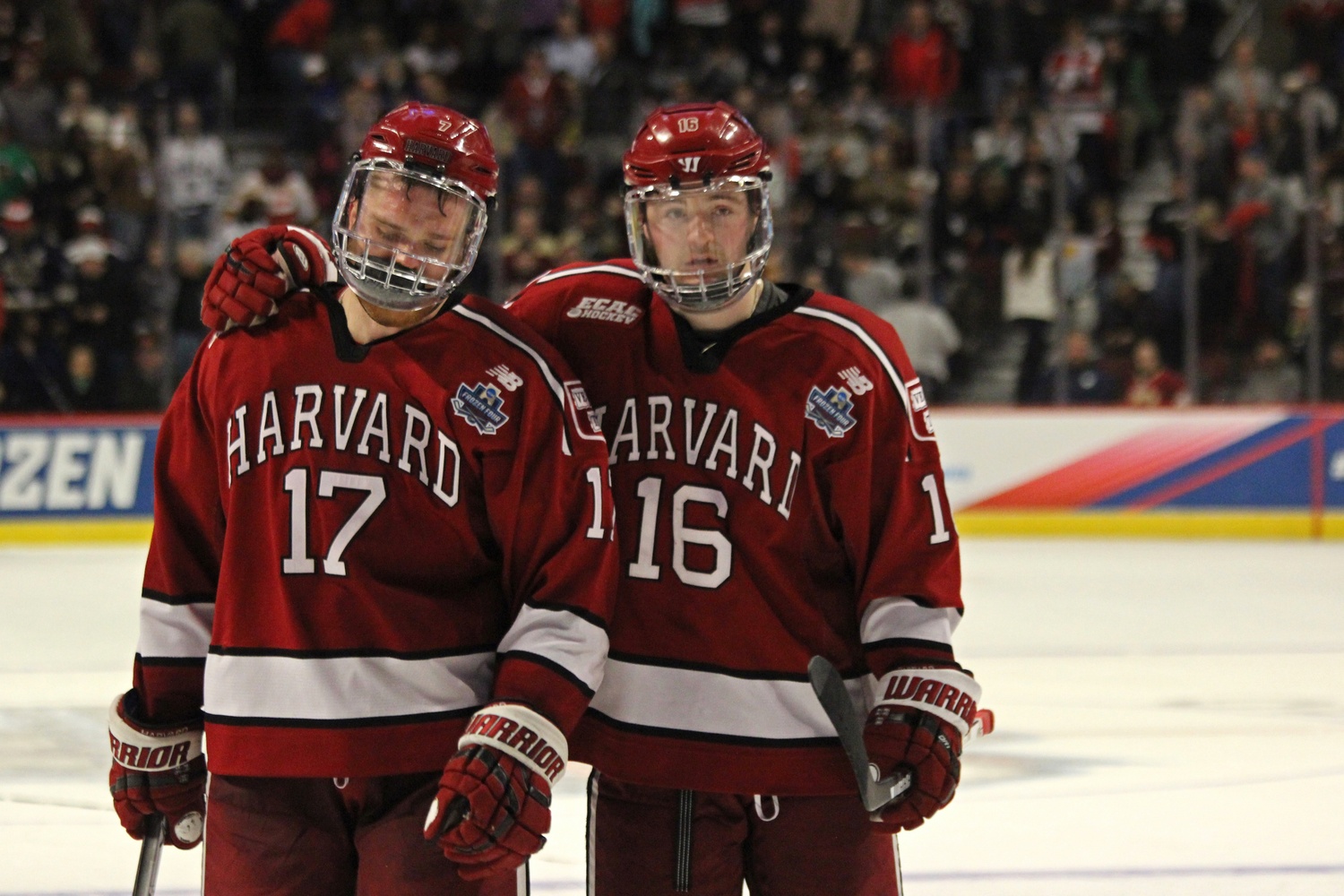 In 1989, Harvard lived. With an overtime winner in the national championship game against Minnesota, Ed Krayer ’89-90 set a Crimson coronation into motion. One made possible only because Gopher defenseman Randy Skarda’s extra-frame wrister moments earlier was on a collision course with the iron.

Twenty-eight years later, it’s the Gophers’ rivals to the north providing similar postgame testimony. Only this time, the Minnesotans’ comments came after the NCAA semifinals. And this time, they came from a much happier locker room.

With only 14 seconds remaining and Harvard needing a goal to keep its magical 2016-2017 campaign alive, senior Sean Malone crashed the net and lifted a backhanded rebound over Minnesota-Duluth goaltender Hunter Miska’s right shoulder. But the Bulldogs were saved by the crossbar.

Seconds later, the Crimson cycled the puck over to co-captain Alexander Kerfoot, who made his move down the left faceoff circle before firing a pass to Luke Esposito, stationed halfway down the slot. 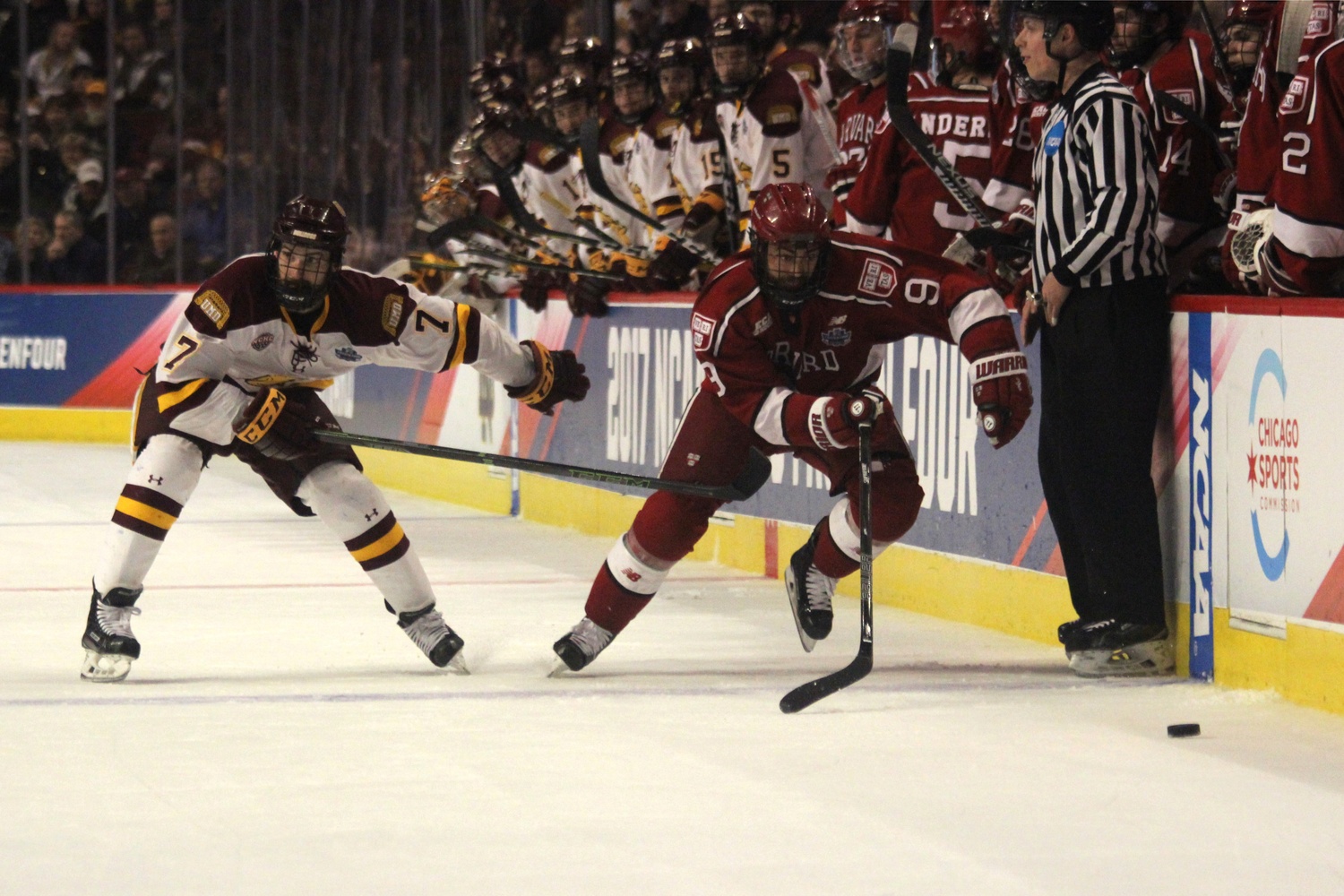 With Miska covering more of the right side of his cage, Esposito turned his hips and fired away. But defenseman Nick Wolff had a plan.

“Right when he shot it, my first thought was go down,” Wolff said. “And it hit the top of my knee.”

The shot began rising to chest level, but upon connecting with Wolff’s kneecap, it took off for the rafters. And the puck’s upward trajectory—along with Harvard’s 28-win season—was soon brought to an abrupt halt, once again by the crossbar.

“If it had been one inch lower it would’ve gone bar down,” said Wolff, whose Bulldogs emerged victorious by a 2-1 margin to advance to Saturday’s national championship game against Denver. “We were very fortunate it stayed out.”

“It’s something that I’ll probably never forget as long as I play hockey,” Esposito said. “I’m still in disbelief that it didn’t go in. The whole last 30 seconds, I can’t believe it.”

In a game that was tied for more than 56 minutes, those last 30 seconds were essentially all that separated the two teams on the country’s longest, and second-longest, winning streaks. 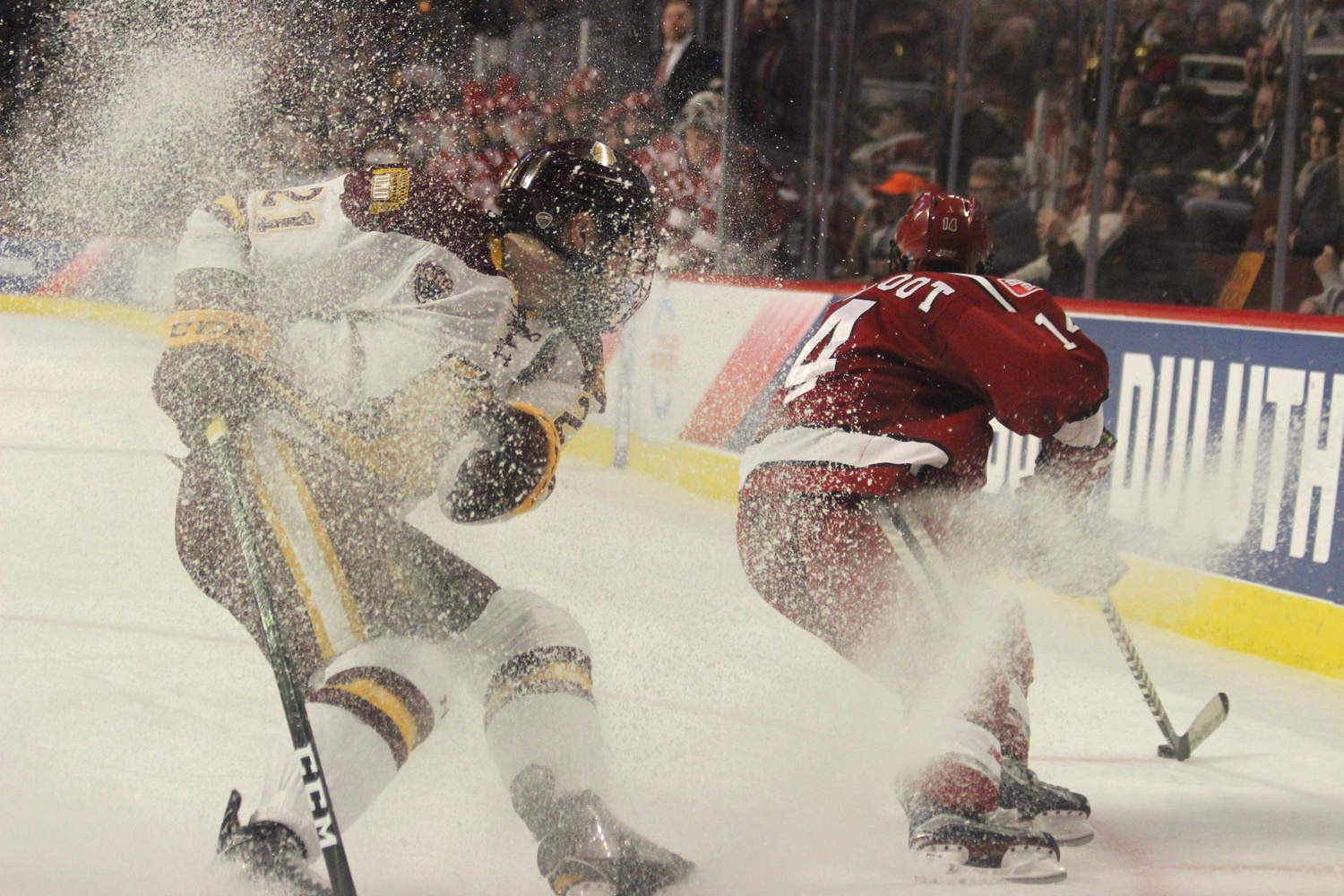 And while those 30 seconds ended with iron, they began with twine.

Emerging from a battle of bodies along the boards just inside the Crimson zone, UMD freshman Joey Anderson flung the puck towards the slot from his backhand, spelling a clear and present danger. The feed arrived on the stick of senior defenseman Willie Raskob by the left faceoff circle, creating a 2-on-1 for the Bulldogs (28-6-7, 15-5-4 NCHC). And with UMD’s leading scorer in his sights, Raskob’s best interest was to pass.

One step ahead of Esposito, senior Alex Iafallo received the pass atop the crease and poked the puck through Madsen’s five-hole—off the right pad, then the left—breaking a 41-minute stalemate with only 27 seconds remaining in regulation.

“I tried to slide over and just play the percentages—it’s tough to know where those shots are going to go,” Madsen said. ”He just squeezed it through. Watching the replay, it was the only hole he really had. It just bounced through my pads. I tried to squeeze it together, but it just wasn’t enough.”

Two crossbars later, Iafallo’s 50th point of the season—one that extended his point streak to 14 games—could finally be printed safely on the stat sheet as the final tally in a 2-1 Bulldog victory.

“The end was so sudden,” Harvard coach Ted Donato ’91 said. “Everything happened so fast,” Kerfoot added. 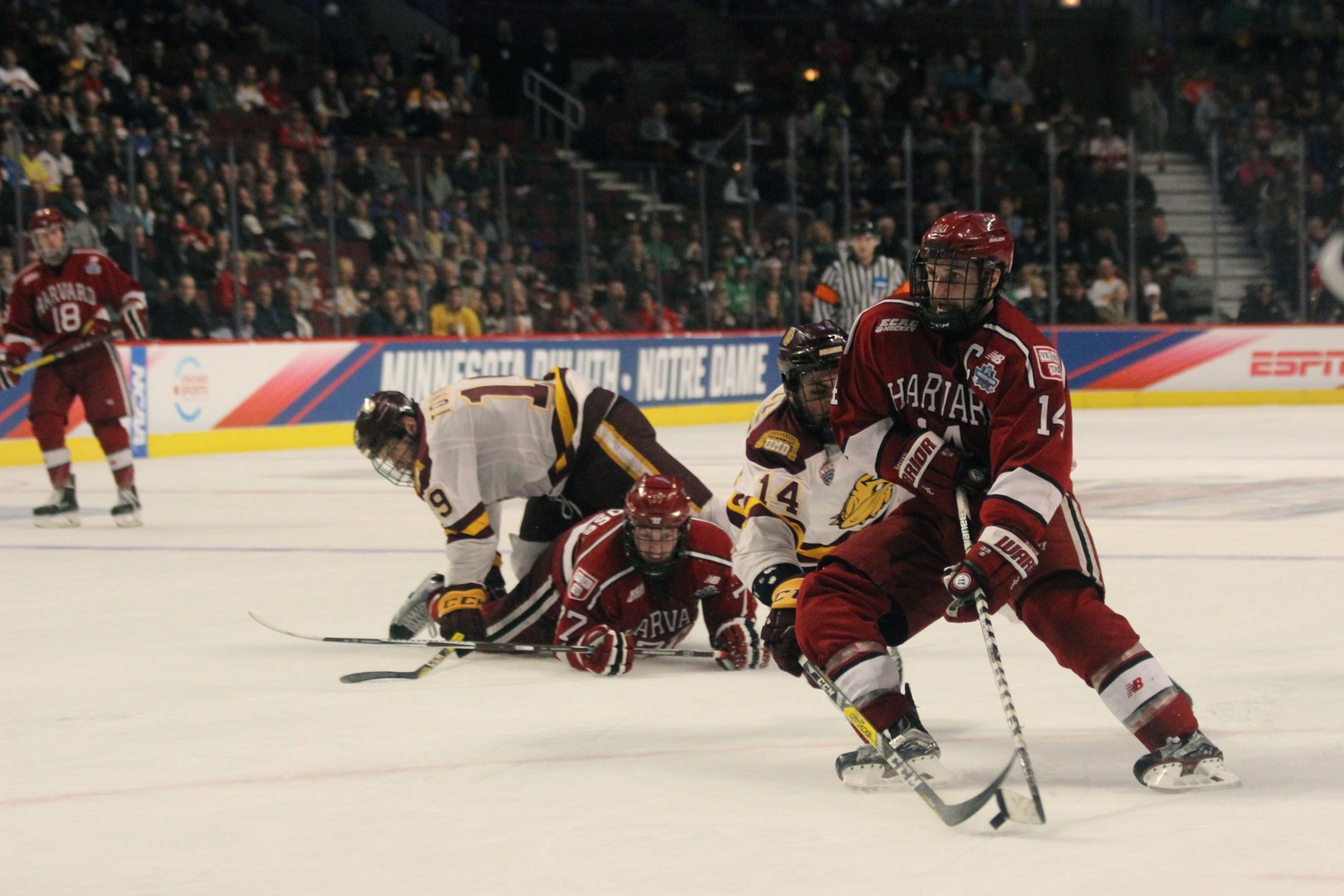 Only 14 minutes prior, the Crimson (28-6-2, 16-4-2 ECAC) thought it may have taken the lead. Amid a busy crease, Malone—on the heels of an initial Tyler Moy try—jammed the puck over the goal line, but the official behind the goal immediately signaled no goal. The play was reviewed, but there would be no overturn.

“You know, it looked like the puck was in before he was able to blow the whistle,” Donato said. “The explanation I was given was that there was no audio on the replay. He thought the goalie at one point had it underneath his glove, and in his mind, that's when the play was over.”

“Obviously through my Harvard-colored glasses, it looked like a good goal,” the coach added. “But everybody's trying to do their best out there.” 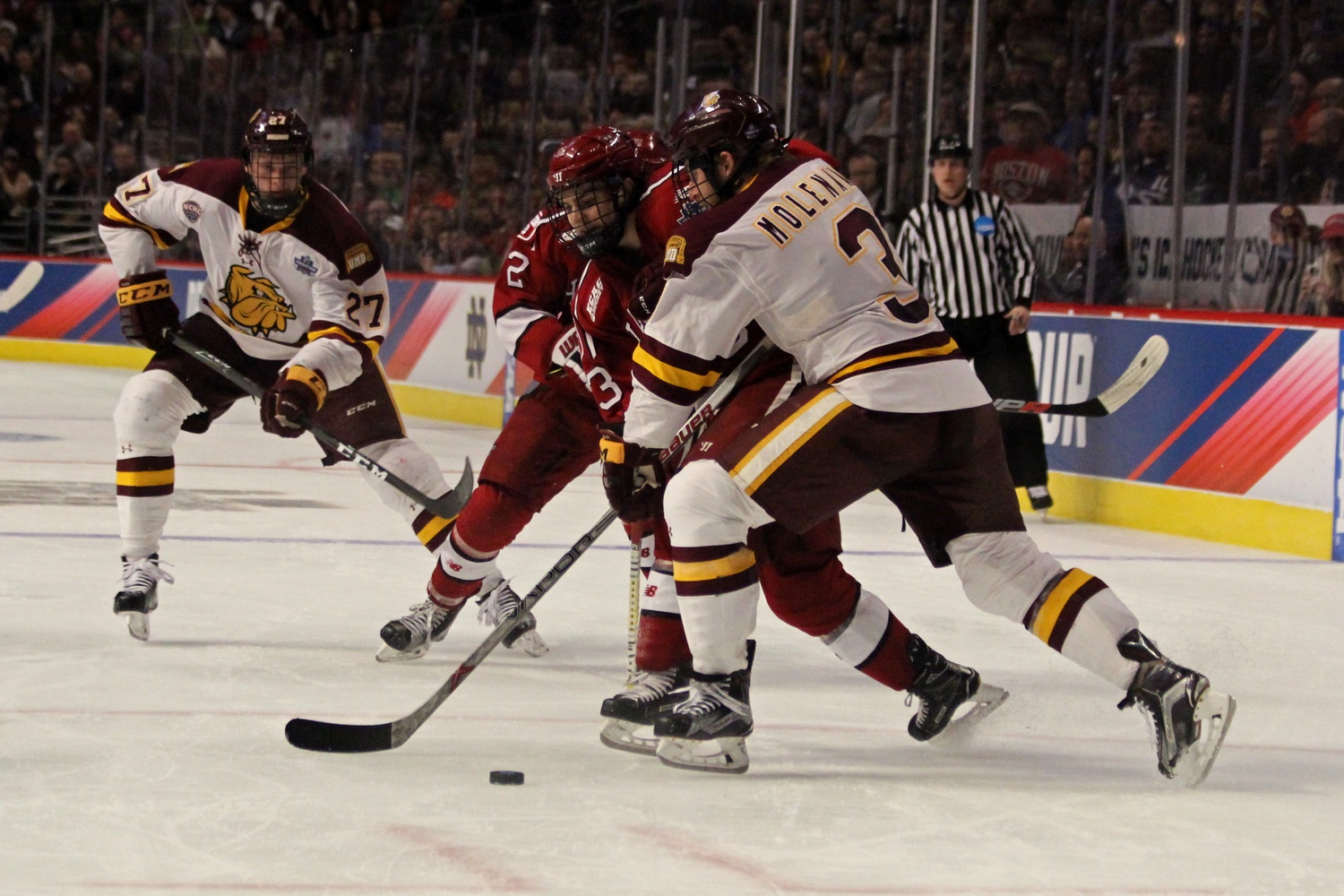 Within moments of nearly jumping ahead, the Crimson was sent to the defensive. Off a Viktor Dombrovskiy d-zone turnover, UMD assistant captain Karson Kuhlman connected with sophomore center Adam Johnson, who deked his way into space by Madsen’s left post.

But with trouble afoot, the junior goaltender dropped to the ice, stretching his left pad as far as it would go to seal off the pipe. Madsen finished with 36 saves on the night—his second-highest output of the season.

Meanwhile, Harvard launched 40 shots, becoming the first team this season to reach such a total in regulation against the Bulldogs. But only one beat Miska, crossing the line during a Harvard power play.

Moy opened the scoring from his signature spot on the man advantage. Stationed at the bottom of the left circle—right where he grabbed the first goal of the Crimson’s NCAA Tournament run in Providence, R.I.—the Nashville Predators prospect knocked in a feed from Kerfoot to put the Crimson up 1-0. 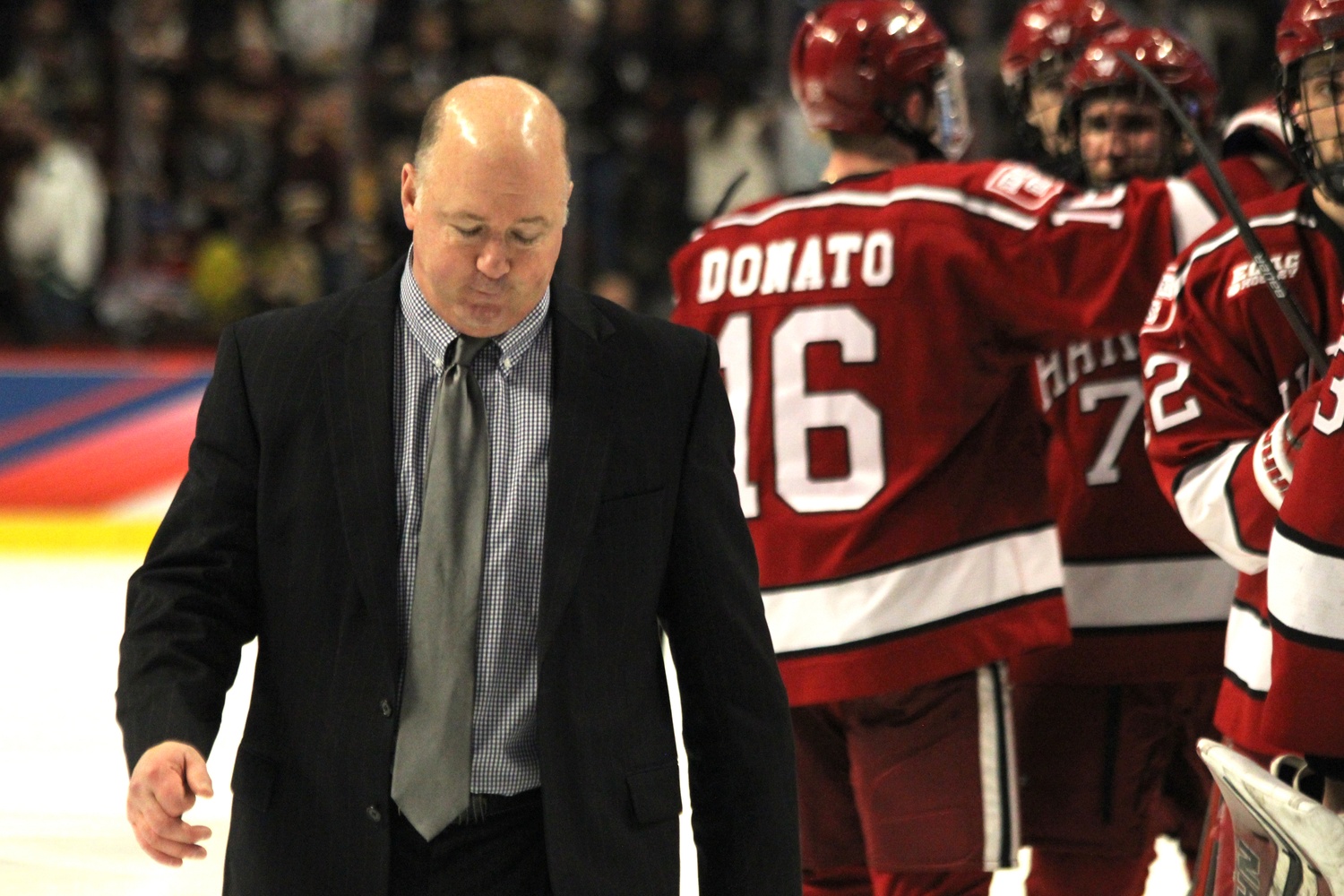 Harvard has now scored first in 24 of its 36 games, and the Crimson entered Thursday with a 21-2-0 record in such contests. But this time, Harvard’s lead lasted only three minutes and change.

Despite dropping the first-period faceoff battle by a sizable 17-8 margin, the Bulldogs used one of their eight successful draws to pull even with 1:36 left in the frame. After captain Dominic Toninato’s win at the dot, Anderson ripped a shot from the top of the slot that bounced off the stick of Madsen and in. 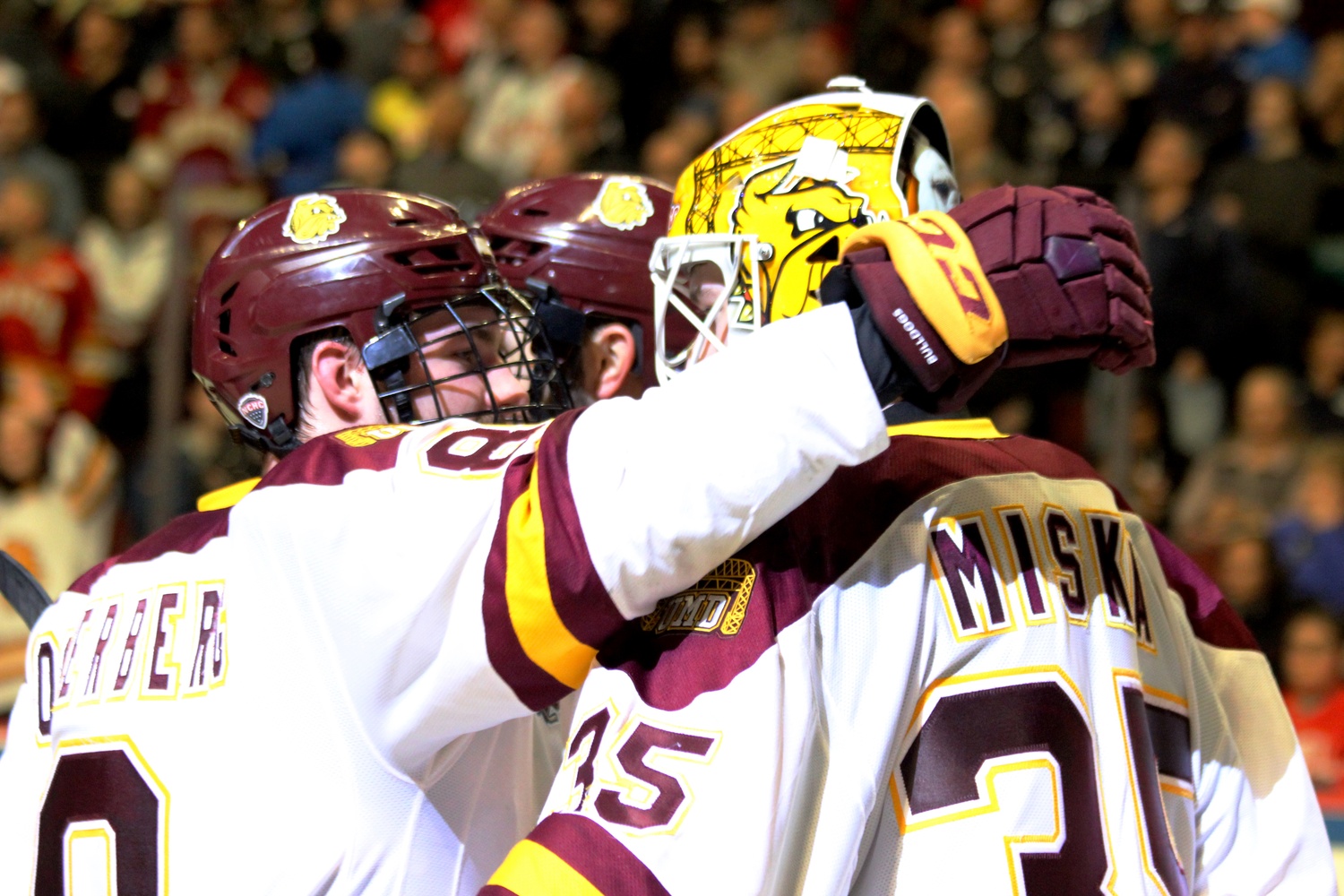 Minnesota-Duluth forward Kyle Osterberg hugs goaltender Hunter Miska in celebration of their win over the Crimson. Minnesota-Duluth advances to the NCAA finals on Saturday. By Thomas W. Franck

“It’s just a bounce that we didn’t get tonight,” Madsen said. “If that shot wobbles a little differently, it sticks right on my stick, and I cover it…. It was pretty bizarre for me. I’m sure I looked confused because I was. I couldn’t believe the puck did what it did.”

Madsen hit the nail on the head. And two weeks ago, so did Providence coach—and former Harvard assistant—Nate Leaman. After his Friar team fell to the Crimson in the two sides’ tournament opener, Leaman said that “to win a national championship, you know you’re going to have to get some bounces along the way.”

Thursday night, Harvard didn’t get the bounces. And as a result, a national championship won’t be in the cards. But after a Frozen Four appearance, a 28-win season, and a plethora of championships, the Crimson’s seniors can at least check off one more box.

It’s an accomplishment that’s been important to several straight classes on their way out the door: the Crimson’s seven veterans have left the Harvard jersey in a better spot than where it was when they arrived.

“It’s easy to say that we’ve done that,” Esposito said. “Harvard Hockey’s definitely back on the map and back where it deserves to be.”