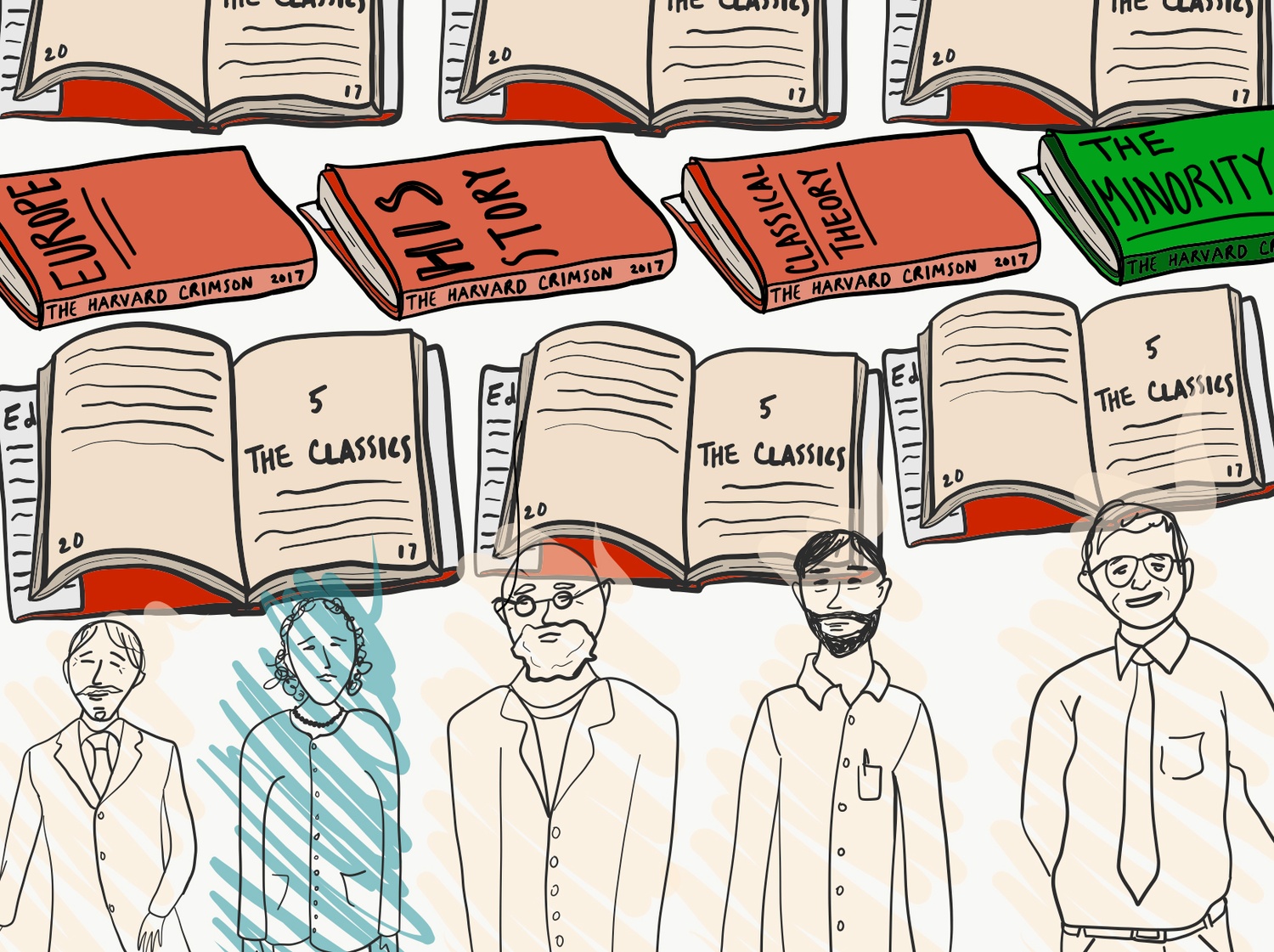 Over the past decades, Harvard College has become remarkably more diverse: In the current Class of 2020, half are female and almost half identify as non-white. But while admissions have successfully diversified Harvard’s student population, this new class of students has been left without commensurate support in the classroom. Although Harvard boasts a diverse student body, progress in diversifying faculty and curriculum has fallen decades behind, failing to keep pace with the changing demographics of undergraduates.

Initiatives have been prompting change too slowly, reflected in the majority of tenured Harvard faculty who are white males. Students still express the need for more diverse curricula, and the University still lacks an Ethnic Studies program. We believe the status quo should not continue. Instead, Harvard should re-commit to diversifying its faculty and push for a more diverse curriculum. These efforts are necessary for Harvard to live up to the promise of a liberal arts education and for it to better serve its diverse student body.

THE PATH FORWARD ON FACULTY DIVERSITY

Harvard has long touted the diversity of its student body as an indicator of intellectual rigor, opportunity for personal growth, and the strength of its community. Efforts to broaden the backgrounds of the faculty who teach, mentor, and support these students, however, has lagged significantly behind.

The tenure track, an indicator of the future composition of tenured faculty, is made up of 5.2 percent underrepresented minority females, 8.4 percent Asian females, and 25.8 percent white females. Underrepresented minority males make up 6.1 percent, Asian males compose 12.3 percent, and white males are 42.3 percent. Laws surrounding interview practices make reliable data on faculty identifying as BGLTQ unavailable. While these trends are a commendable improvement over the last decade, it is only the beginning of the progress Harvard needs to make.

The need for more diverse faculty is twofold. First, success in academia is exceedingly demanding, with its demands for original insights, productive research, and masterful teaching. Female faculty, faculty of color, and BGLTQ faculty face the added barrier of often feeling isolated in scholarly communities dominated by white males, where they report both feeling respected and accepted but also sensing implicit challenges to their presence. With the struggle to find peers of a similar background and experience comes a struggle to find and foster community and support. Our world-class faculty deserve better.

BGLTQ students, students of color, and female students face a similar struggle when they see few faculty with whom to relate. They can question their place or future in academia as a result. Currently, the comparatively few diverse faculty willingly take on a disproportionate advising burden in an effort to mentor these students, but doing so necessarily distracts from their careers. Students deserve more support, and although faculty receive recognition for their exceptional mentorship, they need help to maintain this network for the long term.

Harvard also stands to benefit: Intellectual diversity and broader research activity will be aided by a more diverse faculty. A 1995 faculty survey administered by UCLA’s Higher Education Research Institute demonstrated that minorities in higher positions of academic authority have “expanded and enriched scholarship,” in part due to their introduction of different perspectives that give rise to novel concerns and interpretations.

Other studies have shown that female faculty and faculty of color engage in more “student-centered pedagogy” than their counterparts, resulting in an increase in student engagement that stimulates growth in intellectual and academic skills. These qualities—characteristic of deepened critical thinking and academic insight—are vital for undergraduates.

By Harvard developing a more diverse professoriate, both students and faculty stand to benefit immensely. This is not, however, the only instance of diversification that can aid our community. The introduction of curricular opportunities at the College that include the narratives and perspectives of people of color, underrepresented minority groups, and BGLTQ communities will serve as a purposeful and effective attempt at further diversification.

This lack of curriculum diversity is not new. In 2010, former Crimson editorial writer Sabrina G. Lee ’12 claimed that the Social Studies 10 “syllabus is comprised almost exclusively of white, European, heterosexual male theorists.” In 2015, the report written by the University-appointed working group on Diversity and Inclusion highlighted several major issues with the current academic offerings. The report found that out of thousands of course offerings, a mere 217 “critically engage with issues of identity and difference.” The majority of these courses were offered in the social sciences, which still struggle with a dearth of non-Western perspectives.

These issues have not fallen completely on deaf ears. This year, for example, the English Department approved a motion to include a concentration requirement that would require students to take at least one course featuring authors that have been “marginalized for historical reasons” including “racism, patriarchy, and heteronormativity.” We commend the move and hope that other departments take critically important steps in efforts to diversify their syllabi.

A broader curriculum would help develop cultural competency in students, a crucial factor in the educational growth of the next generation that has rarely been more significant. A focused effort to include courses that discuss the narratives of marginalized minority groups challenges the predilection of historical works and the Western canon that currently make up the bread-and-butter of many Harvard classes.

The synthesis of more perspectives would provide students with a breadth and depth of insight to analyze the ways in which phenomena like imperialism, racism, and white supremacy have molded both the narrowed educational scope provided by the College and the ways in which students interact with this information. Moreover, integrating these voices into curricula lessens the feeling of tokenism attributed to students who belong to these specific groups. Instead of often being asked to represent an entire ethnic or racial group, the weight of cultural and ethnic representation can be shifted off of their shoulders and onto syllabi.

THE NEED FOR ETHNIC STUDIES

When discussing curriculum, one omission is particularly glaring: Harvard does not have an Ethnic Studies program. The discipline got its start at San Francisco State University in the late 1960s, but Harvard has woefully lagged behind. Since 1972, students and faculty have worked on various proposals to bring Ethnic Studies to campus, but the efforts have been largely unsuccessful. Indeed, Harvard falls far behind many of its peer institutions.

It is disappointing that a place hailed as one of the premier universities in the world would lack a robust Ethnic Studies program. The Committee on Ethnicity, Migration, Rights offers a secondary degree, with the option to choose a track in Latinx Studies, but it cannot hire ladder faculty. History and Literature recently announced that concentrators would be able to choose to do an Ethnic Studies track as well. While this reflects decades of student activism and is a welcome addition, it is ultimately inadequate. Like the EMR secondary, the track within History and Literature cannot add professors and the requisite courses.

Students coming from historically underrepresented backgrounds should not have to bear the unwelcome onus of teaching their experiences to their peers. Through the broadening of the perspectives of both faculty and curricula, all students would be offered the opportunity to learn in a manner that incorporated diverse thought and celebrated a variety of experience.

Faculty and curriculum diversity are inextricably tied. Harvard could lessen the burden on students from underrepresented minority backgrounds while offering a broader education to their peers of privileged backgrounds. The entire student body would benefit, and Harvard would be better positioned to realize its promise of an expansive liberal arts education. The University has both the means and the ability to achieve these goals; all it needs is recognition of the needs of its students and a true commitment to diversification.