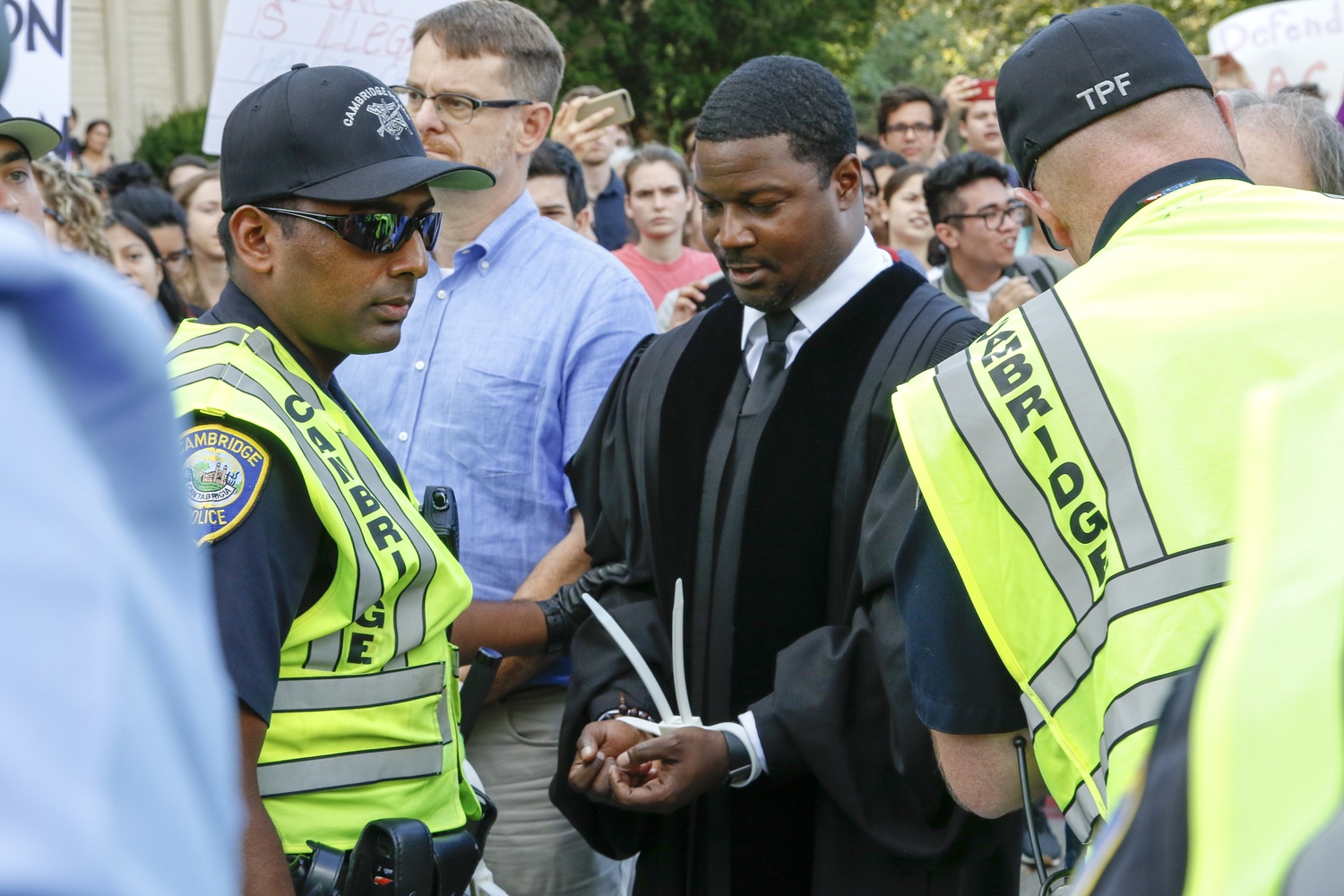 Reverend Jonathan L. Walton was arrested at a protest against the repeal of the Deferred Action for Childhood Arrivals program on Thursday afternoon. By Timothy R. O'Meara
By Leah S. Yared, Crimson Staff Writer

Thirty-one professors from Harvard and other Boston-area universities were arrested Thursday for blocking traffic along Massachusetts Ave. in protest of President Donald Trump’s decision to rescind an Obama-era program that gives legal protections to undocumented young people.

Professors took to the street outside Johnston Gate in a planned act of civil disobedience, forming a human chain and blocking traffic on Mass Ave. Before the arrests, Cambridge Police officers read a written statement warning protesters that they would be arrested if they did not move.

According to Cambridge Police Department spokesperson Jeremy Warnick, the protesters face charges of disturbing the peace and bail is set at $40. After posting bail, they will be required to appear before a judge tomorrow morning, Deputy Superintendent Jack Albert wrote in an email.

African and African American Studies professor Walter Johnson, who was among those arrested, spoke of a “moral responsibility” to stand with undocumented students.

“It just came to a point of crisis, both for the nation and for us,” Johnson said. “It seemed like it was time for us to jump off, and to try to both stand firmly with our students, to stand for justice and decency in the face of an unjust law, and to try and kick off a conversation about resistance between campuses in Boston and among faculty.” 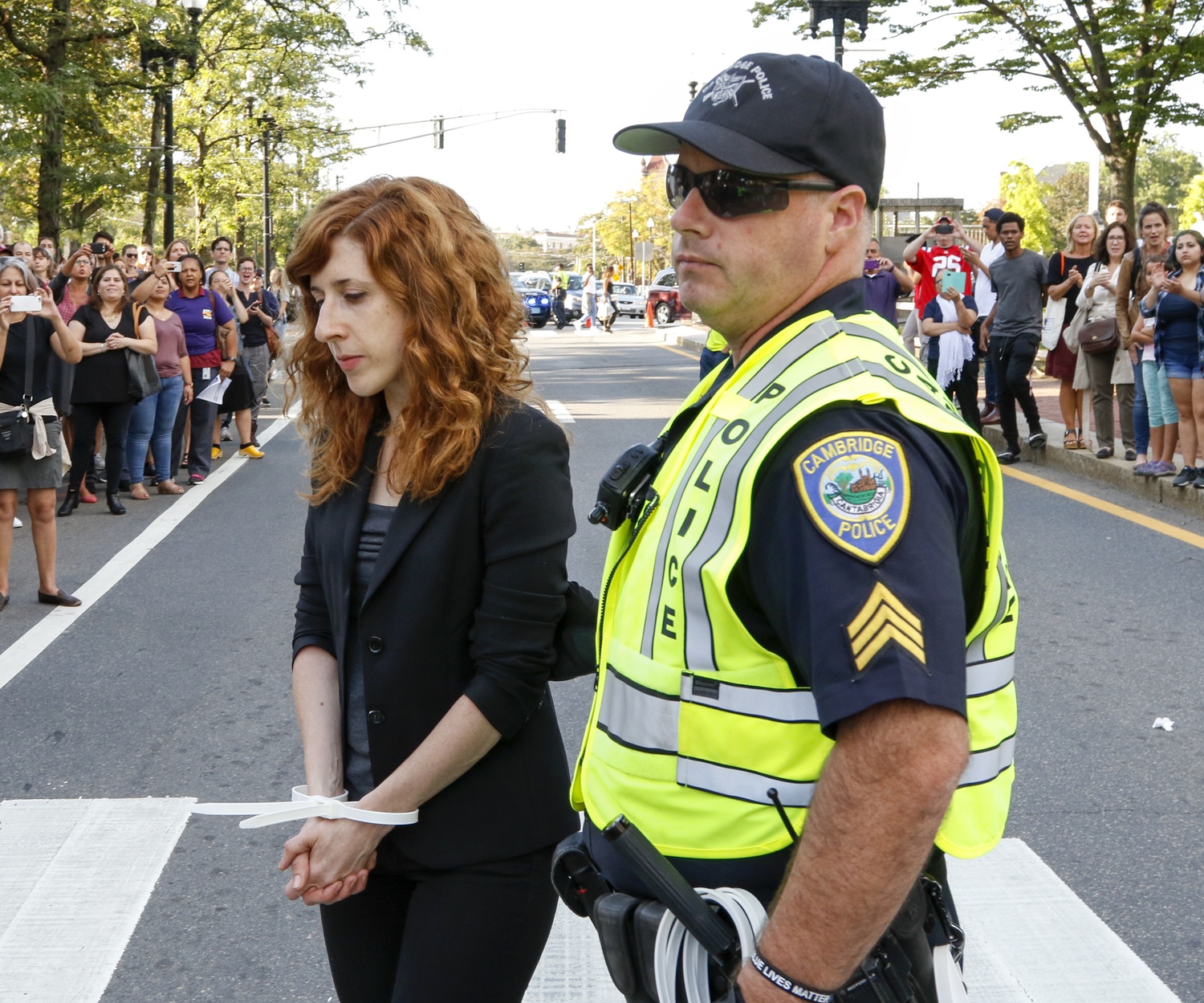 Professor Kirsten Weld was among the professors who were arrested on Thursday afternoon at a protest of the repeal of DACA. By Timothy R. O'Meara

Kirsten A. Weld, a History professor who started a conversation about the DACA repeal over a faculty email list, was also among those arrested. That conversation led to a meeting Wednesday morning, where roughly 75 to 100 faculty members from Harvard, Tufts, MIT, Babson, and other area universities brainstormed what they could do to support undocumented students, according to Weld.

Weld said the professors wanted to do more than sign a petition, and felt it was “high time” to act. In a speech to the crowd, she said three of the students in her 14-person course were undocumented.

“It’s not business as usual because the Trump administration is targeting our students,” Weld said in an interview before her arrest.

Divinity School professor Ahmed Ragab was naturalized as a U.S. citizen in downtown Boston just an hour before he was arrested in the protest.

“This is something that allows me to live under protection, to be safe and secure,” Ragab said of his new citizenship status. “It feels so sad to see that on the day, at the time that I’m getting these rights, that my students are being deported and taken away from this country, that is their country.”

Before the arrests, several professors, one undocumented student, Massachusetts State Representative Marjorie C. Decker, and Memorial Church Minister Jonathan L. Walton spoke of the need to take action against the policy outside Massachusetts Hall to a crowd of roughly 300 students, faculty, and affiliates from five different universities. Khurana was also at the protest.

Walton, who was later arrested, denounced the Trump administration in his remarks.

“We are here to say to the U.S. President, to his Attorney General, and to all the insecure leaders of this nation, that no human being is illegal,” Walton said.

Trump’s decision to end DACA in six months sparked outrage across campus Tuesday, and hundreds of Harvard affiliates gathered to protest in front of Memorial Hall.