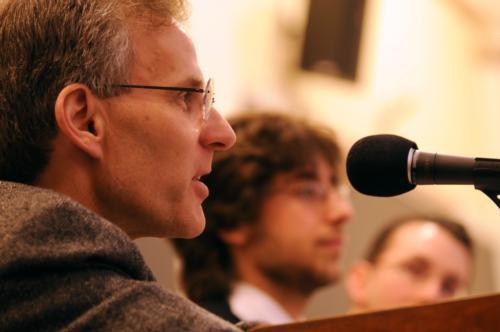 Some Harvard Economics professors say the current high valuation of bitcoin—the founding coin of the international virtual currency boom—is unsustainable and will eventually drop, thanks in part to government regulation.

Bitcoin is an electronic, or “crypto” currency, started in 2009, which operates independently of a central bank and exists only as a series of transactions on its server, “blockchain.”

In the early years, bitcoin was worth comparatively little, ranging in value from five to 20 dollars. But in the past two years, the price of a single bitcoin has spiked to more than $20,000 before falling back to around $16,000.

Economics professor Kenneth S. Rogoff, a cryptocurrency expert, said the currency’s present high valuation depends on its “near-anonymity.” This anonymity has permitted various criminal or illicit activities through bitcoin markets since the currency’s inception in 2009, including drug dealing, unlicensed gun sales, and donations to hate groups, he said.

But that anonymity may soon end—Rogoff said he thinks governments will probably want to identify bitcoin users in the future. “Small anonymous transactions with virtual currencies…would be desirable,” Rogoff said, but “large-scale anonymous payments would make it extremely difficult to collect taxes or counter criminal activity.”

He pointed to China as an example of a nation that has already banned bitcoin exchanges. On the opposite end of the spectrum, Rogoff warned that Japan, which “has enshrined bitcoin as legal tender,” could risk “becoming a Switzerland-like tax haven—with bank-secrecy laws baked into the technology.”

Economics professor Jeffrey A. Miron, a libertarian economist, said he disagreed with the suggestion that bitcoin technology’s lack of a footprint makes it riskier than traditional paper currency.

“We’ve seen the transformation of all sorts of industries from being on paper or in some physical unit to being all electronic, and nothing bad has happened. Indeed, a lot of good stuff has happened,” he said.

“There’s no reason the government should be concerned about means of payment that are not regulated by the government,” he added.

Miron also disputed the notion that bitcoin is too-often used for illegal transactions. He particularly mentioned the drug trade, noting those selling illegal drugs were able to use government-backed currencies "for centuries" before the invention of bitcoin.

Nonetheless, he said he is not optimistic that cryptocurrencies like bitcoin will remain unregulated.

“It [government] could let cryptocurrencies peacefully exist, and not accept them as a means of payment, and that’s what I think it should do,” Miron said. “But my guess is that sooner or later governments are going to regulate cryptocurrencies out of existence.”

Even if governments do not regulate bitcoin out of existence, Rogoff said he thinks the currency—as well as its competitors like Ethereum, Ripple, and Monero—will eventually fall in value thanks to government interference.

“What the private sector innovates, the state eventually regulates and appropriates,” Rogoff said. He predicted that, ultimately, central banks will create their own currencies and “use regulation to tilt the playing field until they win.”