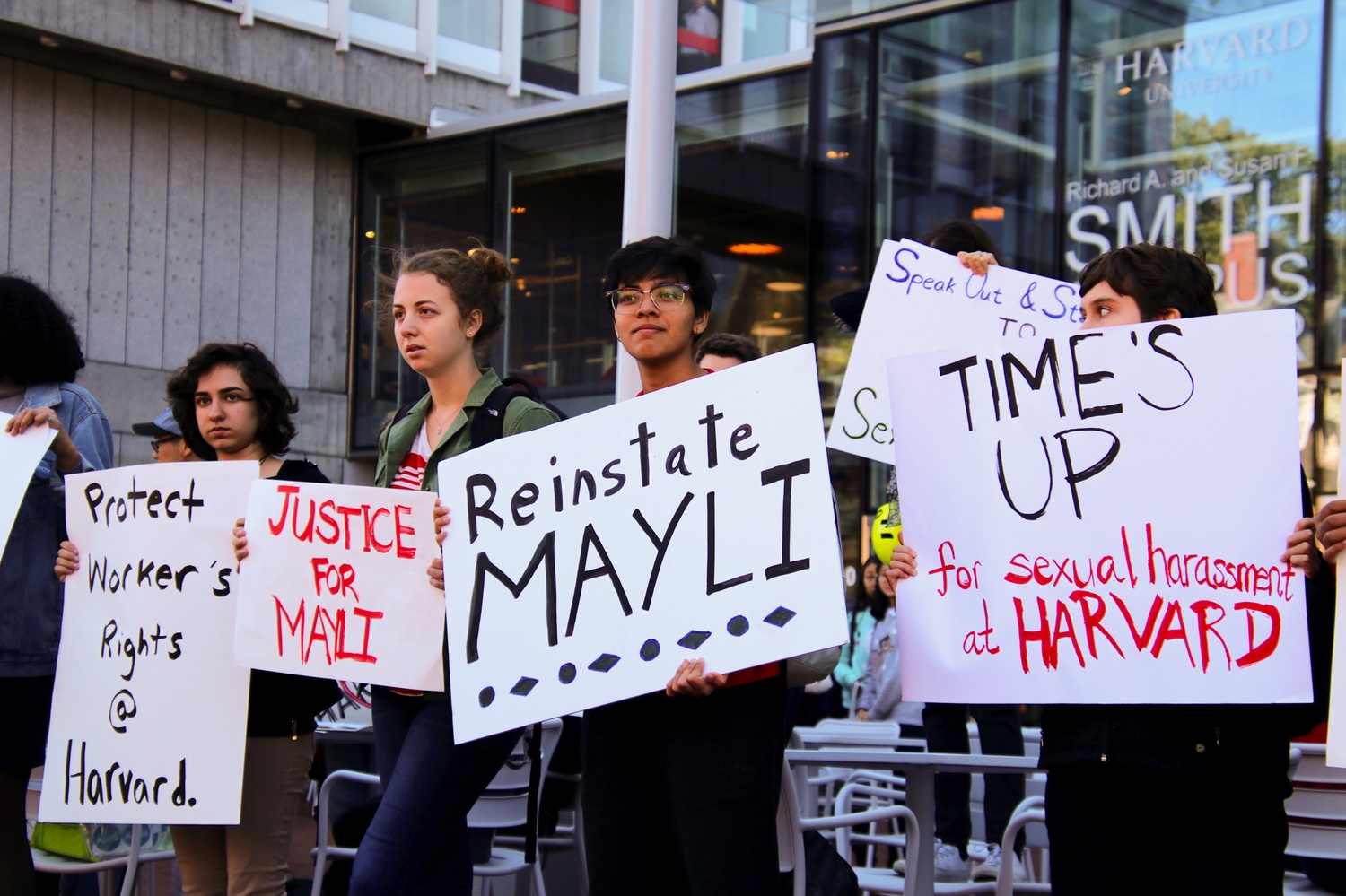 Chanting through the halls of Harvard’s Office of Employee and Labor Relations, a delegation of around a dozen students and employees attempted to confront University Director of Labor and Employee Relations Paul R. Curran over the controversial firing of former Harvard University Health Services employee Mayli Shing.

The group — comprised of undergraduates, graduate students, and members of three campus labor unions — sought to convince Curran to reinstate Shing, who was fired in February. Shing claims she was fired in retaliation after she made allegations of workplace racism and sexual harassment.

The group specifically chose to march to Curran’s office on Tuesday in light of Shing’s Wednesday hearing at the Massachusetts Division of Unemployment Assistance.

Shing began receiving unemployment benefits from the state of Massachusetts in July, according to Geoffrey Carens, a member of the Harvard Union of Clerical and Technical Workers who represents Shing. Carens said Shing and her supporters are asking the University to compensate her for the five-month period between her firing and the awarding of unemployment benefits — and to rehire her.

“Going without income all that time put a very severe financial strain on Mayli and really affected her life very gravely,” Carens said.

According to her termination letter, Shing was fired because of “insubordinate conduct in repeatedly disregarding instructions and previous warnings.” The letter specifically cites an incident in which Shing arrived at work 30 minutes before her shift began, despite having been told not to do so.

Thursday’s demonstration was the latest effort in an ongoing campaign calling on the University to rehire and reimburse Shing.

Since her termination, a loose coalition of student and employee groups — including the Harvard Student Labor Action Movement, the Harvard No Layoffs Campaign, and anti-sexual assault advocacy group Our Harvard Can Do Better — hosted four rallies to support her. Most recently, the group picketed in front of the Smith Campus Center during the inauguration of University President Lawrence S. Bacow, calling on Bacow to support Shing’s reinstatement.

On Thursday, the activists didn’t make it past Curran’s door.

When they arrived at the Labor Relations Office, a staffer informed them that Curran, along with most of the office’s personnel, was negotiating a contract with the HUCTW and could not meet with them.

After leaving a message for Curran with the staffer, the group retreated through the halls of 124 Mount Auburn St. chanting, “What do we want? Rehire Mayli! When do we want it? Now!”

Afterwards, they gathered on the front steps of the office to place calls to Curran’s office phone.

“Harvard is trying to claw back unemployment benefits that HUCTW member Mayli Shing has already received. Please drop this vindictive effort immediately and see that Mayli is rehired in a new, full-time job with a new supervisor and full back pay!,” their suggested call script read.

SLAM member Saul A. Glist ’22, who participated in Thursday’s action, said he feels it is crucial that students support and advocate for employees like Mayli who “make this place run.”

“It’s really important right now, just given the culture around sexual harassment and sexual assault in the workplace,” Glist said. “If we’re trying to create a welcoming Harvard community, that obviously includes the workers who support it.”