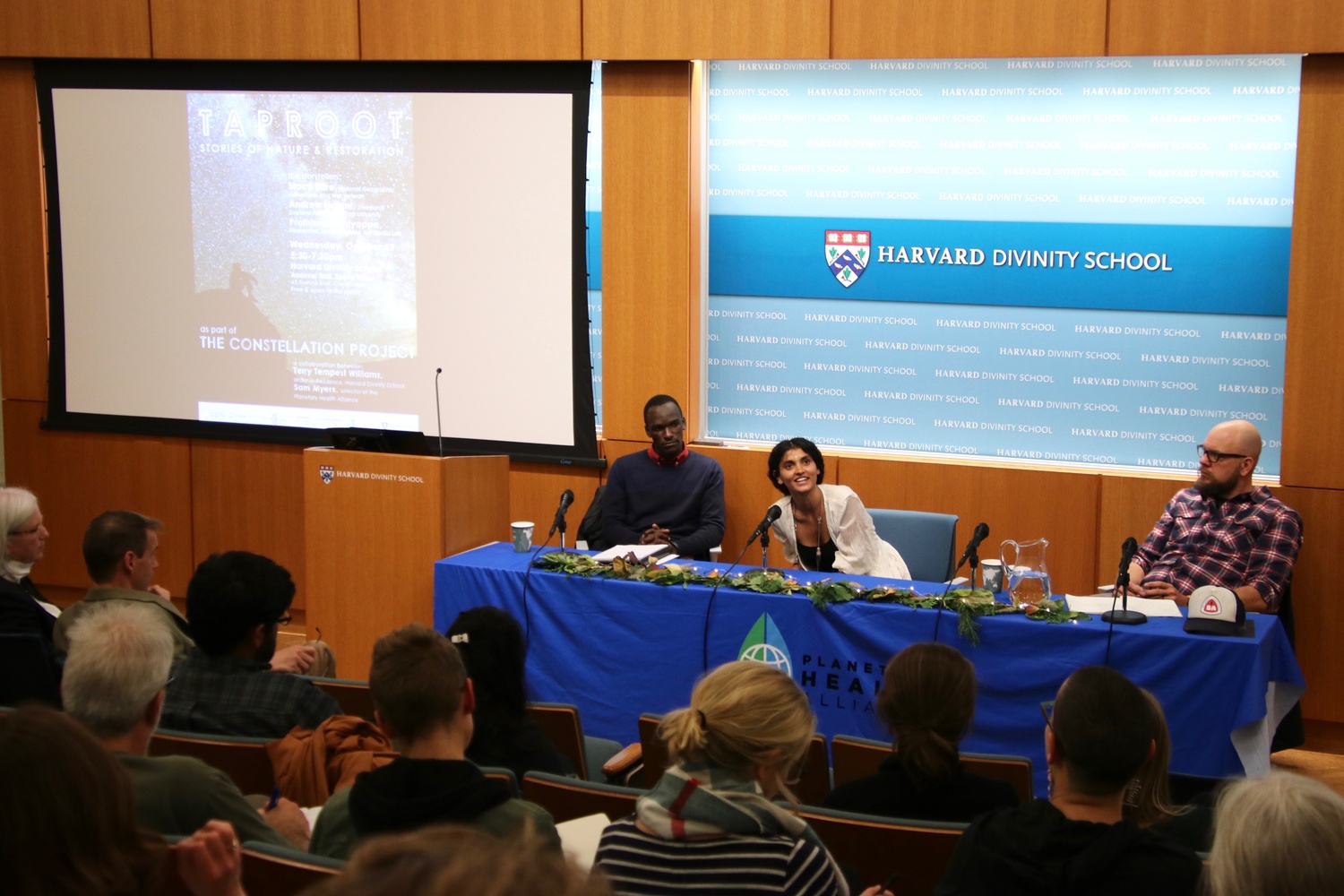 At Harvard Divinity School Wednesday night, students, faculty and members of the public gathered to do what the Divinity School does well — get philosophical. Their pursuit: forming a better understanding of humans’ relationship to the natural world and imagining how it might evolve in the future.

The event, titled “Taproot: Stories of Nature & Restoration,” was put on by the Constellation Project, and convened thinkers from a variety of backgrounds, who spoke about everything from indigenous communities, to religion, to mental health, each in relation to nature and humans’ complex relationship with it.

Stacy A. Bare, one of the headlining speakers, spoke to the audience about being an Iraq war veteran who struggled with addiction and suicidality after returning to the U.S. Bare said the outdoors saved his life, and today he has dedicated his life to encouraging people to explore nature. 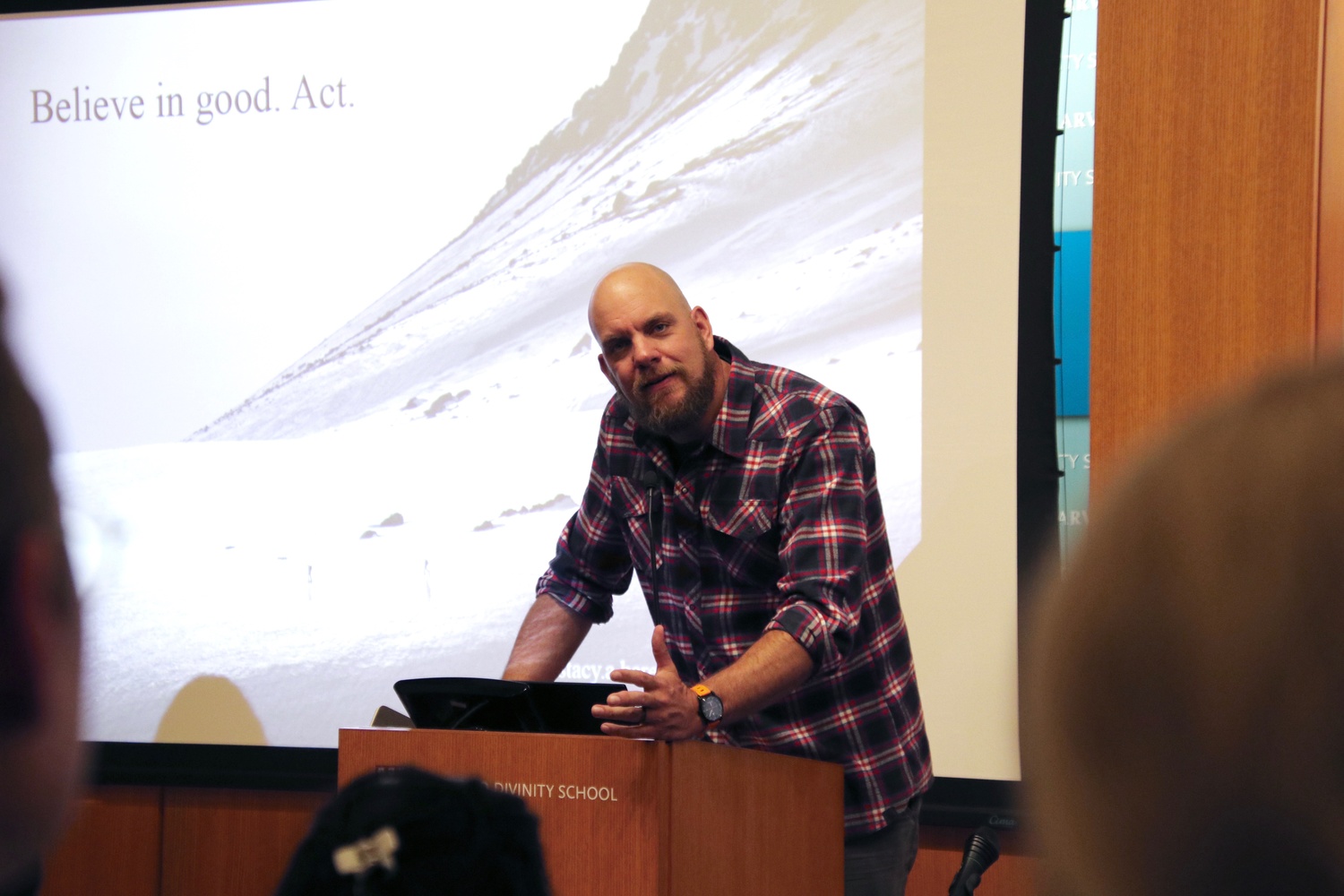 Stacy A. Bare, Founder of Adventure Not War and National Geographic Adventurer, speaks about his experiences and connection to the outdoors Wednesday evening at Harvard Divinity School. By Amy Y. Li

Bare spoke alongside Prathima Muniyappa, a researcher at the MIT Media Lab; and Andrew Nalani, a Steinhardt Doctoral Fellow at New York University. All three storytellers spoke about their own relationships with nature and spirituality.

During her presentation, Muniyappa discussed a new project that aims to reconcile cultural and ritual practices with the escalating expansion of human settlements. As part of her work with the MIT Media Lab, Muniyappa wants to “build a database where ritual knowledge is treated the same way as scientific knowledge.”

The event was led by Dr. Samuel S. Myers ’87, Director of the Planetary Health Alliance and research scientist at the Harvard School of Public Health, and Terry Tempest Williams, author and current writer-in-residence at the Divinity School.

“We brought together three powerful storytellers,” Williams said in an interview before the event.

“At the root of this is trauma. Trauma of war, trauma of loss of the natural world, trauma of violence of all kinds,” Williams said. “Tonight we are really looking at these stories and how they can lead us to a place of restoration.” 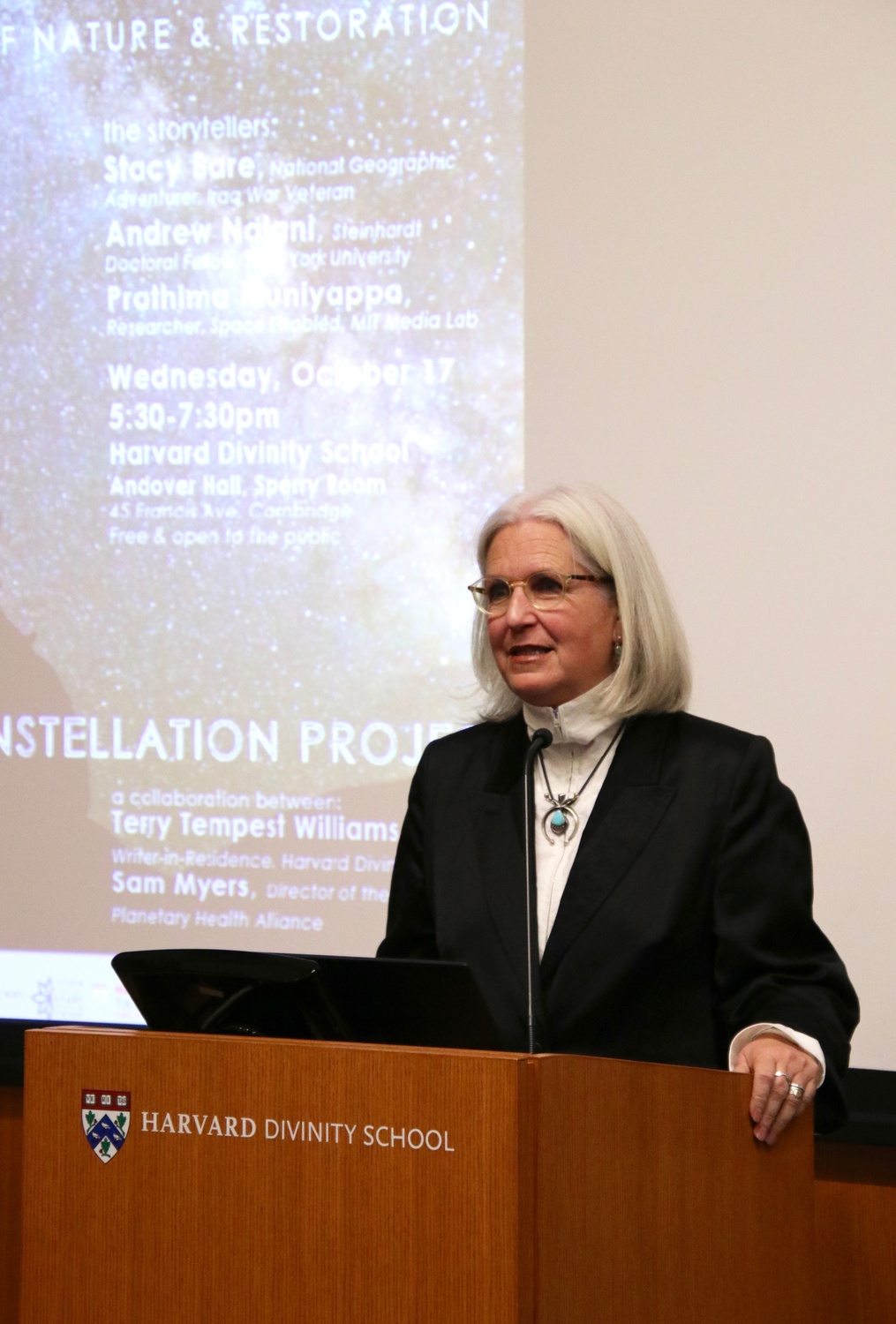 The Constellation Project was born out of a 2016 encounter between Myers and Williams. What followed was a two year long conversation, often over tea, between the two scholars about separatism among academics “where scientists don’t talk to theologians who don’t talk to humanists, who don’t talk to business people who don’t talk to attorneys or people in public policy.”

At the core of the project’s inception, for Myers, was the realization that humans’ relationship to the Earth was in crisis.

“Underneath that environmental crisis and that public health crisis, maybe there is actually a spiritual crisis — that there seems to be something fundamentally broken in our relationship to nature,” Myers said. “How is it okay to treat our atmosphere and our oceans as gigantic garbage dumps? What makes it acceptable to drive species extinct 1000 times faster than normal?”

In an open discussion after the speakers finished, attendees commented on how the event had changed their perspective on science, nature and spirituality.

“I think it's cool how they implemented public health, spirituality, and the environmental movement as a whole” Rachel D. Levy ’21 said. “Make people care a little bit more, step away from the science which is there and reestablish that personal connection with nature.”

Wiliams said that next semester the Constellation Project will be exploring climate by inviting elders from Greenland and Polynesia to try to find common ground between their experiences as “human in place.”

“What I hope people come away with is a little discomfort, some sparks, some new ideas, hopefully an interest in engaging in this conversation in the longer term,” Myers said.