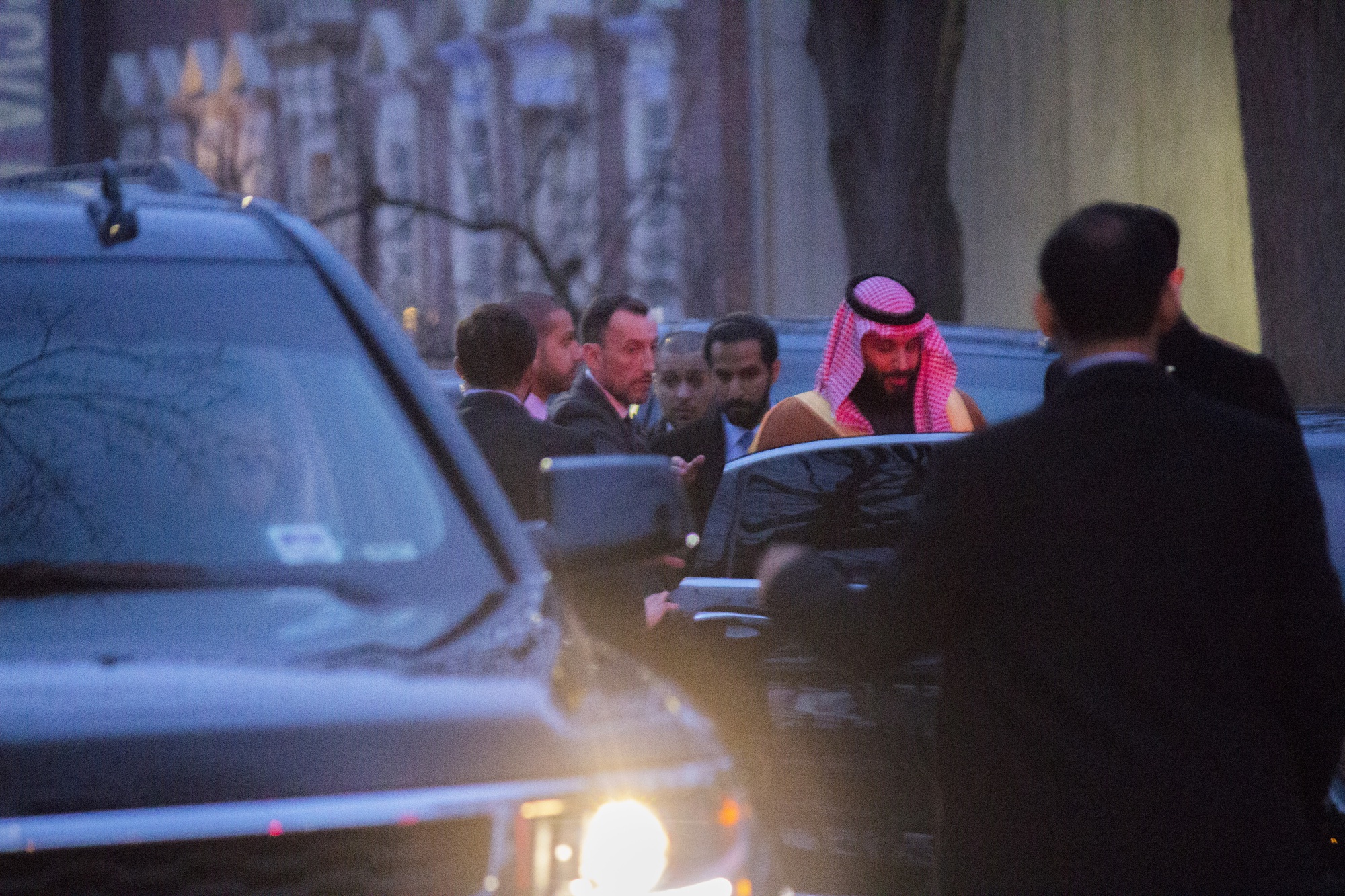 By Shera S. Avi-Yonah, Crimson Staff Writer
The Crown Prince of Saudi Arabia leaves the Harvard Faculty Club in early 2018 and climbs into a waiting motorcade. By Awnit Singh Marta

In a statement she gave to MIT’s student newspaper following the visit, university spokesperson Kimberly Allen said that “Saudi Arabia and MIT have a longstanding collaborative relationship focused on subjects of mutual interest.” Allen added the partnerships bring female Saudi students to study in the United States and support “the development of sustainable energy.”

The next day, March 24, Prince Mohammed visited Harvard. Roughly two miles away in Cambridge, there were no protests and no University press releases.

The Harvard Gazette, a University-run publication, did not report on Prince Mohammed’s visit to campus. The Saudi government was less quiet, issuing an official press release on March 24.

“The Kingdom has strong ties with various American educational institutions, including Harvard University, and it aims to further develop these ties,” the release read. “The Saudi-U.S. partnership is strong across various cooperative levels, including education and research.”

The University’s relative silence during the March visit parallels a broader quiet about the bonds between Harvard and the Saudi Arabian government. These links, whether established through donations or research partnerships, have drawn limited attention. They are listed at the bottom of web pages — if at all.

Prince Mohammed, the de facto ruler of the authoritarian kingdom, has embarked on an ambitious reform program and sought in recent years to bolster his country’s connections to the West. But after Washington Post journalist Jamal Khashoggi was killed by a group of Saudis affiliated with the crown prince in Turkey earlier this month, American businesses, lawmakers, and educational institutions are re-examining their relationships with Saudi Arabia and its heir apparent.

Harvard, it seems, has privately opted to wait out the tide of criticism.

A HISTORY OF TIES

Harvard has a long history with the Saudi royal family.

Prince Alwaleed bin Talal — Prince Mohammed’s cousin — hasn’t exactly remained on good terms with the crown prince. Prince Mohammed imprisoned his cousin in a hotel in Riyadh last year as part of a sweeping effort to consolidate his power within the sprawling royal family.

In the 13 years since that first set of professorships, programs across the University have quietly formed partnerships with the Saudi royal family and associated entities.

After the 2005 gift, Center for Middle Eastern Studies Director William Granara said a Saudi national has since endowed a position in contemporary Arabic studies. Granara emphasized that the nature of the donation was personal, not political.

Granara added that the Center does not “have ties to any government.”

“When we get funds... a lot of them are actually [from] graduates of Harvard University,” he said. “If and when there is a situation in which we would look for, or we were approached by an official government from the Middle East who wants to give us money, we work with the development office. We don’t do that directly.”

At least two programs at the Kennedy School have formal connections to the Saudi government royal family. Per its website, the Evidence of Policy Design initiative “collaborates directly with policymakers” at the Saudi Ministry of Labor” to identify opportunities for data and economic analysis meant to suppor local labor markets and social development.

Similarly, the Belfer Center’s Project on Saudi and Gulf Cooperation Council Security “is made possible through a gift from HRH Prince Turki bin Abdullah bin Abdulaziz Al Saud of Saudi Arabia,” according to its website.

Earlier this semester — before Khashoggi’s murder — administrators met to reconsider the ethics of these partnerships.

In correspondence obtained by The Crimson, Kennedy School Dean Douglas L. Elmendorf referenced an internal meeting held to address whether Harvard should continue collaborating with repressive regimes including Saudi Arabia's. At the meeting, administrators discussed whether the school’s relationship with these governments might be construed as support.

At the end of the meeting, administrators did not determine a clear path forward, according to the messages.

Neither Elmendorf nor representatives for the Kennedy School have publicly commented on Khashoggi’s death or the relationship between the school and Saudi Arabia.

In an email to The Crimson, Elmendorf acknowledged that the “Kennedy School has accepted money from Saudi Arabia for various research projects and teaching activities.”

“Our principal standards for such work are whether it maintains our tradition of scholarly excellence, whether it can be conducted without donors’ attempting to influence the conclusions of our scholarship, and whether it has positive effects on people in the societies where we are engaged,” Elmendorf wrote. “We believe that our work in Saudi Arabia meets those standards and have made no changes in that work at this point.”

But connections between Saudi royals and Harvard are not limited to CMES or to the Kennedy School.

Prince Mohammed conducts much of his international advocacy through the The Prince Mohammed bin Salman bin Abdulaziz Foundation (MiSK), an education nonprofit. While Harvard websites make no mention of the group, MiSK's site lists the University as an official partner.

The foundation sponsors a summer leadership development course held at Harvard. An MiSK press release dated March 7, 2016 states that “MiSK Foundation has an agreement with Harvard University to allocate 12.5% of the 800 seats for MiSK students.”

MiSK has sent out multiple press releases and tweets about the collaboration replete with photos of smiling high school students posing in Harvard Yard. Arabic language news outlets have written about the partnership as recently as 2016.

Representatives for Harvard Extension School, which runs the Summer School, did not respond to a request for comment about the partnership.

After the March protests against Prince Mohammed, the Cambridge City Council passed a unanimous resolution calling on Harvard and MIT to dissociate themselves from the Saudi government. At the time, neither university did so.

Since then, the regime — and its connections to the United States — have re-entered the spotlight.

The Saudi royal family is currently facing international scrutiny in the wake of Khashoggi’s death. Khashoggi, a one-time ally of the regime, disappeared on Oct. 2 after entering the Saudi consulate in Istanbul.

After initially offering a counternarrative, Saudi officials have since acknowledged Khashoggi died in the consulate following what they called a drawn-out fight gone wrong. Political leaders and analysts around the world have dubbed the Saudi story an attempt to cover up a premeditated assassination.

Representatives for the royal family have repeatedly denied any connection between Prince Mohammed and the events in Turkey. These denials come as Turkish authorities gather mounting evidence that the Saudi government was responsible for the killing — and as experts on the regime say any order to kill Khashoggi must have earned the Crown Prince’s sign-off.

On Monday, MIT Associate Provost Richard K. Lester wrote in an email that MIT President Reif had asked him “to conduct a swift, thorough reassessment of MIT’s Institute-level engagements with entities of the Kingdom of Saudi Arabia” in the wake of Khashoggi’s death.

He added the journalist’s death and the allegations leveled against Prince Mohammed “are matters of grave concern to all of us.”

No Harvard administrators have released public statements since Khashoggi died.

Across the past two months, some affiliates have questioned Harvard’s official Saudi ties, arguing their opaque nature renders them suspect.

Griffin N. Peterson and Yarden Katz, who are both affiliated with Harvard, wrote an editorial in the Guardian following Prince Mohammed’s March visit titled “Elite universities are selling themselves — and look who’s buying.”

Katz said he and Peterson wanted to highlight under-the-radar partnerships, not to “moralize.”

“There are just so many of these webs of alliance that you can’t make a list of the ties,” Katz said. “We didn’t want to do Saudi-bashing and engage in some kind of discussion of how MIT and Harvard are so pure, they shouldn’t engage. Rather we wanted to point to the fact that these universities have all these secretive, dubious partnerships.”

Rosie Bsheer, an assistant professor in Harvard's History department, wrote in an email that the royal family’s donations to international institutions “aim to rehabilitate the country’s negative image abroad while attempting to influence knowledge production in the United States.”

Bsheer added that the research goals of Saudi-funded projects often stand in stark contrast to the regime’s domestic actions.

“This is the same Saudi regime that has heavily restricted and policed the academic freedom, and the freedom of expression more generally, of its own citizens at home,” she wrote. “Many of these citizens have paid a heavy price."