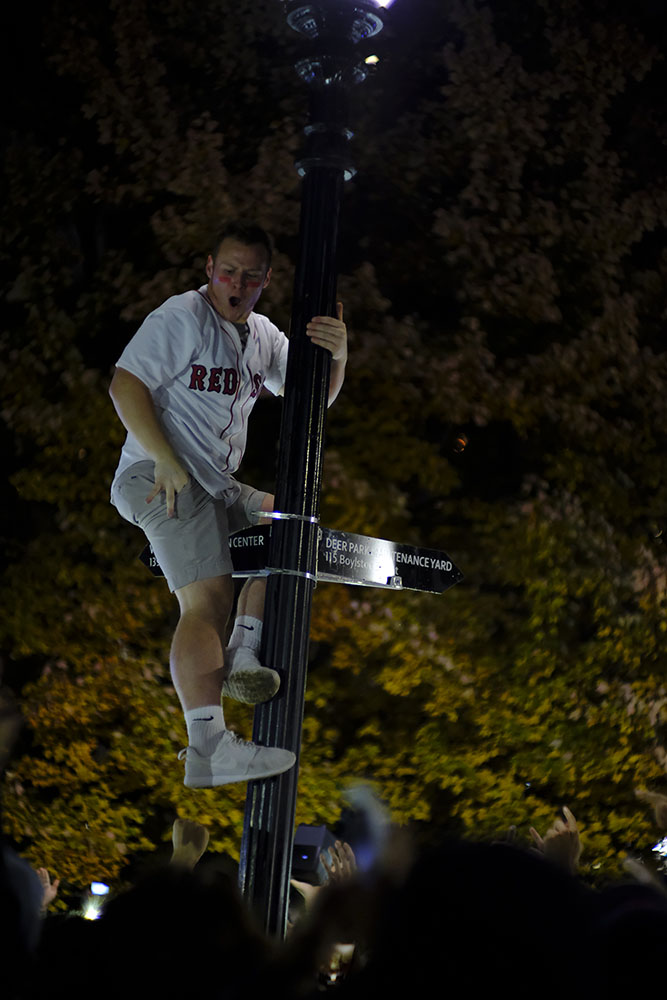 Hordes of people, decked out in Red Sox gear and chanting “Yankees suck!” in unison, poured out of the Park Street T Station and onto the streets Wednesday morning to celebrate the Boston Red Sox’s ninth World Series win.

With a final score of five to one, the Boston Red Sox defeated the Los Angeles Dodgers on Sunday night to become the 2018 World Series champions.

Thousands gathered downtown Wednesday morning for the team’s victory parade, which began at 11:00 a.m. at Fenway Park and ended near Boston’s City Hall. The jubilant crowd included Boston locals and Harvard students alike. With confetti floating above their heads, Bostonians cheered as Red Sox players, officials, coaches and their families rode on duck boats down the streets.

Ethan R. McCollister ’20 attended the parade and described its atmosphere as “electric.”

“It was amazing to see the players and seeing that they were all super riled up,” McCollister said. “They’ve been in pro-mode for the whole season and now they can let loose a little bit and it was pretty funny.”

McCollister, a lifelong fan of the Red Sox, was in the Winthrop House common area watching Game Five, the final game of the series, when the Red Sox triumphed on Sunday. Along with some friends, McCollister took the subway to the Boston Commons that night to celebrate.

Boston resident and Red Sox fan of 64 years, Peter F. Kasarjian, was also in attendance at the parade. Kasarjian watched the final game of the Series in his living room with his wife and said that they “kind of expected” the Red Sox’s victory.

Kasarjian, who is a retired Plymouth school teacher, had not until recently been able to partake in Boston sports celebrations due to his work. Moreover, Kasarjian said that for most of his life, there had not been much to celebrate.

Not all Harvard students, however, were as excited by the team’s victory. Zachary R. Werner ’22, who hails from New Jersey, called the Red Sox franchise “ridiculously pathetic.”

“The Red Sox this year, they were a good team, I’m not denying that,” Werner said. “But I will say though, them singing ‘New York, New York’ in the locker room after they won, it shows that no matter how successful they’ll be, they’ll never stop thinking about the Yankees.”

Werner passed on watching the final game of the World Series Sunday and also opted out of celebratory activities with his friends afterwards.

“As soon as the Yankees got eliminated, I knew it would be best for me to focus on my studies,” Werner said. “My friends were asking me if I wanted to go to Boston to celebrate the game with all the people. I could never ever stoop to that level, of selling my soul to the Boston Red Sox.”

Enthusiasm for Boston’s native team, however, was clear during Wednesday’s parade. Looking on as the Boston crowds tossed a football across the streets, chanting and waving posters, Pam J. Szkutak, Kasarjian’s sister-in-law, described the pure “elation” of the event.

For Szkutak, this year’s World Series win and the following celebration represent more than just a game.

“When they say ‘Boston Strong,’ this is what you’re talking about,” Szkutak said. “We’re strong for bad things, we’re strong when we celebrate good things. That’s what Boston is made of.”