‘The Hate U Give’ Is an Important Conversation on Police Brutality 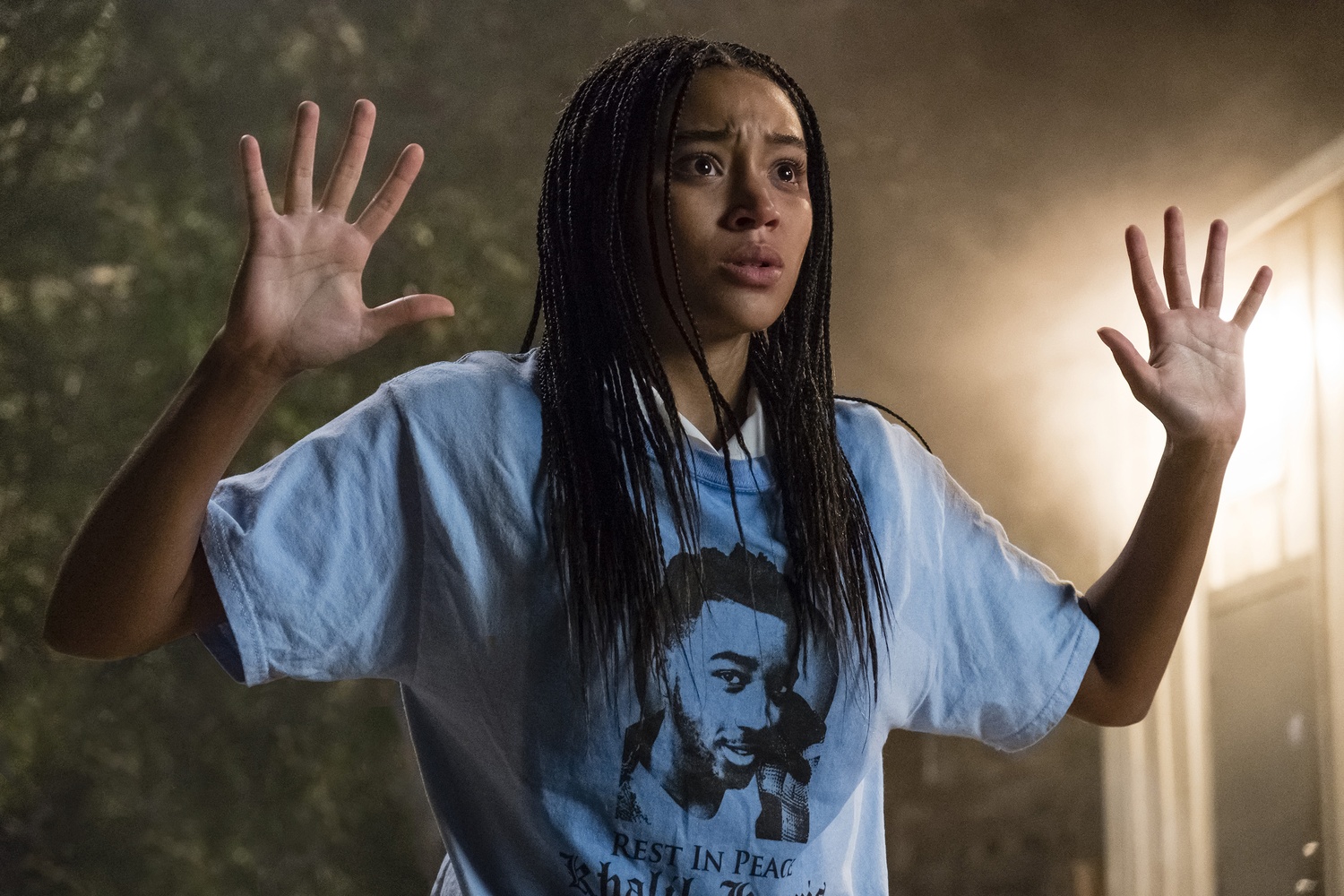 Amandla Stenberg stars in "The Hate U Give" (2018). By Courtesy of Twentieth Century Fox
By Sienna R. Santer, Crimson Staff Writer

“Slang makes them cool. Slang makes me hood,” 16-year-old Starr Carter (Amandla Stenberg) says about the stark difference between her and her prep-schoolmates. She grapples with her two identities: non-confrontational private school Starr, and Garden Heights Starr. In “The Hate U Give,” the cinematography, sound, and dialogue help flip the stereotypical narrative. The warm red and orange tones, loud colors, and slang of Garden Heights contrasts with the cold-feeling, sterile-white tone, and constrictions of Starr’s rich prep school. A visible tension underlines the film as Starr steps into a world where Black Lives Matter protests become excuses to get out of class. Both of Starr’s worlds come crashing down when her childhood friend is fatally shot by a white policeman. Starr struggles with whether or not to speak out about what happened, and what the effect will be on her community, her family, and her identity as a black woman.

The film’s strength lies in its ability to contrast the normalcy of the Carters’ family — established early on with the parents kissing at the dinner table while the kids act grossed out, and the younger brother peeing on the toilet seat and refusing to clean it up — with the horror of the situation they are thrust into. Even the scene leading up to the fateful shooting shows two teenagers shyly flirting, joking about Harry Potter references, bumping Tupac, and finally sharing a sweet kiss. This playful innocence makes the next scene all the more cruel, when Khalil (Algee Smith) is shot by a policeman as Starr witnesses helplessly, after the cop pulls him over for simply neglecting to use a turn signal and mistakes Khalil’s hairbrush as a gun. The sheer normality of the prior scene contrasted with the brutality displayed in the next shows just how a single, close-minded judgement about an everyday situation can affect someone’s life in the worst way possible.

While films such as “Patriots Day” or “Me Before You” tend to unintentionally glamorize real-life tragedies, “The Hate U Give” focuses on an unromantic depiction of grieving. Director George Tillman Jr. shows Starr as she wakes up screaming, vomits repeatedly, and suffers horrible guilt and anxiety while being forced to cope with her trauma. Everyday realities such as going to school, eating breakfast, and playing basketball with friends suddenly feel impossible to Starr and to the audience, as Starr is dragged into a world where the trivialities of teenagedom no longer seem like naivetés, but rather insults to Khalil’s memory. It is a reminder of how many people grapple with their trauma completely alone, not wanting to burden anyone with it yet incapable of living with it themselves. Those watching share in Starr’s guilt — how many have complained about their own trivialities and turned their back on these issues? How many have stood by and watched, rather than stepped up as an ally?

The cast imbues the Carters with an empathy that makes their story all the more potent. Starr’s guttural sobs are enough to bring anyone to tears. The rage of her father, Maverick (Russell Hornsby), radiates off the screen as he is shoved against a glass window by two policemen, as is the sheer terror of Starr’s mother, Lisa (Regina Hall), when she sees that one of her children is about to be seriously harmed, and she has no power to stop it.

The film treats hypocrisy, conflicts within the black community, and issues of white privilege with a feeling of grace and ease that begs the question, “How can people not think this way?” The script grapples with even the infamous “I don’t see color” statement maturely, as Starr immediately counters, “If you don’t see my blackness, you don’t see me.” Tillman Jr. weaves these topics into the story naturally, successfully veering past the preachy into the truthful. It’s as if these opinions were sheer common sense. At a pivotal point in the film and in the development of their relationship, Starr tells her father that he “set a good example of what a man should be.” Not as just a black man, but as a man. These poignant moments in the film touch people’s empathy and continuously bring them back to the notion of just how alike they are. People must continue to ask themselves, however, how they are then capable of treating each other with such hate. There is a drastic need for films like “The Hate U Give” to continuously remind everyone of how much more power their similarities have to unite them than their differences have to divide them.