‘The Death of Stalin’ Amuses, But Lacks Second Gear 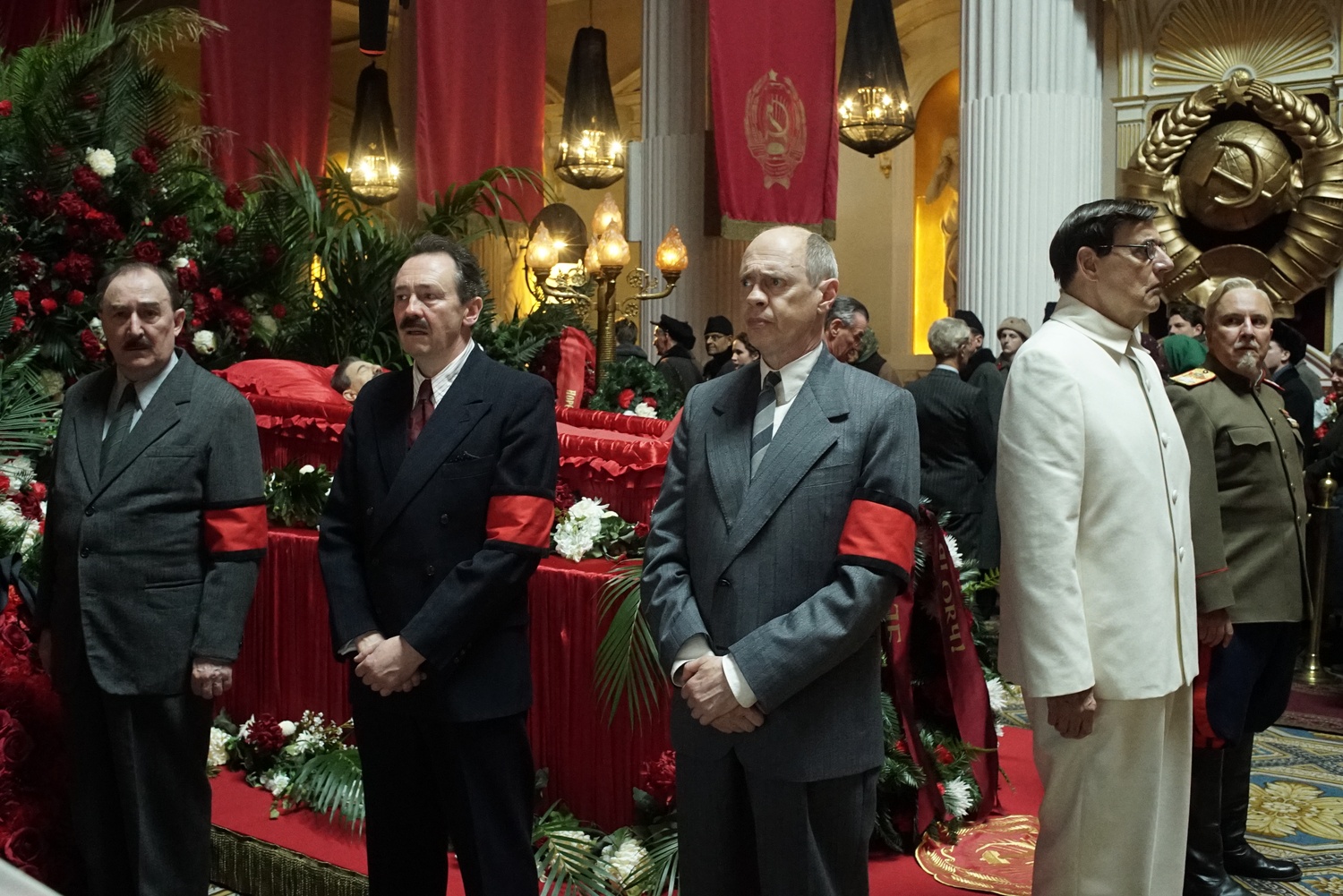 Dermot Crowley as Kaganovich, Paul Whitehouse as Mikoyan, Steve Buscemi as Krushchev, Jeffrey Tambor as Malenkov, and Paul Chahidi as Bulganin in "The Death of Stalin," directed by Armando Iannucci. By Courtesy Of IFC Films Release
By Aziz B. Yakub, Crimson Staff Writer

There is a certain ease with which one may praise Armando Iannucci’s “The Death of Stalin.” It ticks the boxes of what should make a compelling film. Much like his previous work in political comedy—including the sublime “The Thick of It” and the Emmy Award-winning “Veep”—it is bathed in Iannucci’s wit. The dialogue and details are precise. It is uproariously amusing—far funnier than a film with its sheer quantity of institutionalized murder should be.

The work is a delicate exploration of power and cruelty, set on the backdrop of Stalin’s death, funeral, and the ensuing struggle for primacy between Moscow Party head Nikita Khrushchev (Steve Buscemi) and secret police chief Lavrentiy Beria (Simon Russell Beale). We know who wins—Khrushchev would become the first secretary of the Soviet Union during the coldest years of the cold war; Beria, alternatively, was shot. The potency of the narrative does not derive from the surprise of its plot. Instead, “The Death of Stain” is interested in the absurdity of human interaction played out on the scale of a vast government bureaucracy.

This is the film in its most compelling state. “The Death of Stalin” treats each character—from the powerful to the subjugated—as individuals making human decisions. Joseph Stalin (an uneven Adrian McLoughlin), despite the weight of his actions, is simply a man. Like other men, when he has a stroke, he becomes incontinent. Like other men, he heartily laughs at good and bad jokes. He is part of the mediocre masses.

Through Iannucci’s careful satirical eye, unfettered belief in a leader (from prime ministers to presidents to general secretaries) is reduced to an act of theological absurdity. Even the most malevolent acts of state control—and “The Death of Stalin” depicts the gauntlet—are simply products of inserting the natural capriciousness of human emotion into a bureaucratic apparatus that enables their dissemination over the powerless public.

It is precisely the ease with which the whims of man become the acts of state that the film intuitively depicts through its flippant treatment of life and death. As Khrushchev and Beria jostle for power, people are summarily shot and children are violated. Nevertheless, Iannucci is careful not to fully submerge the unsettling human consequences of the film’s absurdist political theater. As a man in an execution line is saved by his position in the line and backroom jostling between these politicians, he returns home to the son who sold him out. After a young girl is implied to be molested by Beria, her parents pick her up in the morning.

The imaging here is subtle. There is a vivid human drama delicately alluded to off-screen that must be pieced together by our imagination. It is not the film’s story to tell—that lies in the machinations of power. Unlike the leaders it depicts, the film is aware of the human cost of political action (the treacherous son; the girl and her family). It maintains a balance between alluding towards the pain of the public and depicting the frivolity with which human life is treated by these (regretfully humorous) individuals.

The mere fact that the film is an intellectually compelling depiction of power should not suppress the fact that this representation appears in a richly funny frame. Iannucci has an astute eye for the absurd. In the opening moments of “The Death of Stalin,” the titular Stalin requests a recorded copy of the evening’s performance of Mozart after the unrecorded concert concludes, impelling the acquisition of a bed-clothed conductor, audience members from the city street, and a several thousand ruble bribe. As Stalin falls ill, our cast of characters find themselves at a loss for which doctors to call. All the good doctors are imprisoned or dead, “We have all the doctors! There is no second opinion.” The film’s smaller scenes are similarly littered with comic details. Beria and Khrushchev, in their unhealthful sedentary glory, race to greet and curry favor with Stalin’s daughter, Svetlana Stalina (a wonderful Andrea Riseborough). A lamp is misplaced on a chair. Khrushchev is reduced to picking the pleats on the curtains for Stalin’s funeral.

As may be implied by the effusive praise above, “The Death of Stalin” is an easier piece to laud than to criticize. This does not mean that this is a good film. Its faults are more understated: There is something subtly disconnected and feckless about its comedic vignettes; the film lacks a spiritual center. A usually wonderful Buscemi is amusing enough as Khrushchev. Nevertheless, his performance lacks the magnetism of Iannucci’s other leading muses. The blame cannot be simply saddled on Buscemi—the lines given to the film’s less central characters lack the full force of Iannucci’s wit. Many of these individuals, including Vyacheslav Molotov (Michael Palin), Anastas Mikoyan (Paul Whitehouse), and Nikolai Bulganin (Paul Chahidi), are unfocused and indistinct sketches. Even worse, others (including Rupert Friend’s Vasily Stalin) never exceed their farcical trappings.

Unlike Iannucci’s previous political efforts, “The Death of Stalin” seems detached from the spirit of its setting. “Veep” and “The Thick of It” derive part of their potency from their symbiotic relationship with place. Alternatively, the film simply treats the Soviet Union as an excuse to explore farcical absurdity of power rather than endowing the setting with a distinct sense of place. This effect is only heightened by aspects of the film’s historical inaccuracy. (Many of these inaccuracies do not matter, such as the compression of various historical events. Some of them do matter, such as the willful glossing of the fact that the “good” doctors were incarcerated primarily because of antisemitism.)

It is not solely the glib treatment with which the film treats Moscow that is deeply problematic—the lack of wide-ranging intellectual curiosity is also worrisome. At his best, Iannucci’s work simultaneously probes a plurality of subjects. “The Thick of It,” for example, works equally well as an exploration of gender politics as it does an exploration of British politics (if the two can be separated). Here, “The Death of Stalin” lacks a second gear. That is not to say that the film is not funny and intellectually compelling—it is certainly both—yet it lacks a sublime breath of beauty that separates great art from the mediocre masses. In this sense, “The Death of Stalin” is much like the leaders it depicts.


—Staff writer Aziz B. Yakub can be reached at aziz.yakub@thecrimson.com.