‘The Price of the Haircut’: Absurd and Astonishing Stories 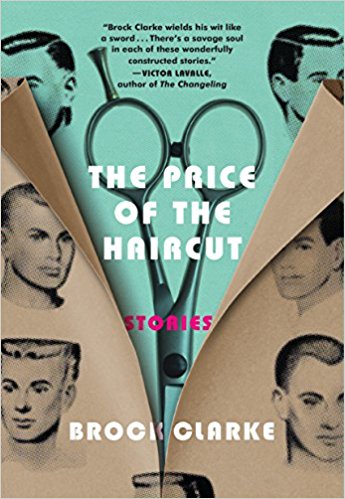 In 272 pages and 11 short stories (some shorter than others), Brock Clarke plunges into the depths of the absurd. His tales, spun from a thread dipped in what witty allegories are made of, reach deep to express powerful emotions, and are consistent in their efforts to explore the complexities of human nature. Clarke’s strength is his cognizance of the surreal, lurking in plain sight yet hidden from the public eye. Clarke’s prowess for the process of defamiliarization stems from this alertness. He wields this tool masterfully, bringing the strangeness of mankind to the forefront in a bid to expose the ridiculous nature of our society and the things we value. By the end of this collection, Clarke has dedicated his eccentric combination of absurd comedy and gut-wrenching tragedy to a range of contemporary themes, from race to the fragility of love and life.

“The Price of the Haircut,” Clarke’s title story, follows a group of men with devastatingly poor haircuts, living in a city rocked by race riots in response to a policeman’s killing of an unarmed black teenage boy. Over the course of a page, the mayor of this unnamed city reveals that the source of this racial tension is “a barber named Gene who charged eight dollars for a haircut and…said something racist.” This eventually leads to the riots. The men are bewildered: eight dollars for a haircut! As the plot unfolds, they engage a pressing moral dilemma: All their lives, they had paid at least 15 dollars for their terrible haircuts. Now, they could pay half that, which would dilute the pain of their catastrophic hair. But, are they prepared to patronize a racist barber—to sacrifice their commitment to the fight against racism? Clarke’s story devolves into the bizarre, yet grave, ethical considerations that leave the reader laughing, and with much to consider.

Clarke loves commas. In fact, Clarke is so in love with commas that his sentences stretch on for pages at a time. His prose is long and winding, but carefully tailored to his stories: They reflect the uncanny content of Clarke’s fiction, allowing his wit to percolate deeper than the plot and into the syntax he employs. This author has no regard for economy of words, yet by some stroke of genius, he is still able to ensure concision in his writing. In that fashion, Clarke’s stories resemble rollercoasters: He writes a tantalizing, never-ending build-up to the top of the ride, and then loosens the reins to let his readers free-fall, hurtling toward emotional clarity. In “Concerning Lizzie Borden, Her Axe, My Wife,” a man learns about his wife’s forthcoming death, growing larger on the horizon, like the hole in her heart. Upon hearing this, he says he immediately thinks “of the corresponding hole in [his] own heart, about it getting bigger and bigger and never closing, and how [he] will eventually want to die from it but can’t and won’t.” This startling moment of pain comes amid a ridiculous story of the couple taking a tour of an axe-murderer’s childhood home, and it is this spectrum of emotion that Clarke plays with so masterfully.

Across the board, Clarke’s commitment to the absurd is noteworthy. In a story entitled, “The Book of Bad Ideas,” he says “absurdity is often the best way to fully appreciate how very bad our very bad ideas really are.” This sentiment shines through his every word in “The Price of the Haircut” with a freshness sorely lacking in other contemporary novels. Clarke grabs what is taken for granted and turns it on its head, restructuring it to convey the sheer absurdity of our accepted and unquestioned conventions. And often, that is what it takes to spark a more profound understanding of humanity.