Zadie Smith on Language and Life at Coolidge Corner Theatre 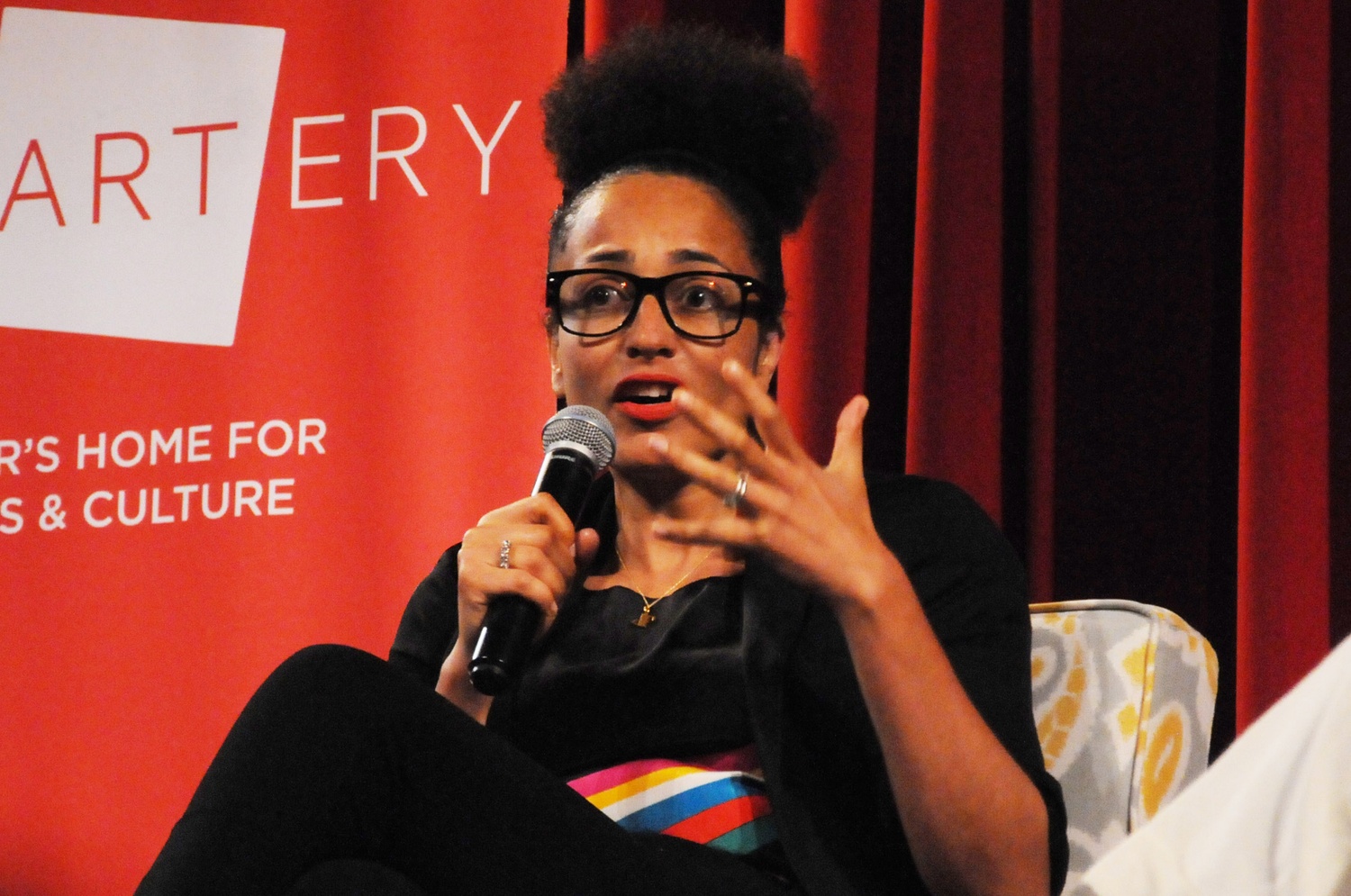 In the foreword to her recent collection of essays, “Feel Free,” Zadie Smith—perhaps the most celebrated novelist of her generation, responsible for such classics as “White Teeth” and “NW”—places the art of writing “at the intersection of three precarious, uncertain elements: language, the world, the self.” “The first is never wholly mine,” Smith writes. “The second I can only ever know in a partial sense. The third is a malleable and improvised response to the previous two.” In conversation with “Radio Boston” host Meghna Chakrabarti at Coolidge Corner Theatre, Smith investigated these three elements speaking, on everything from the topical to the abstract.

Indeed, Smith’s virtuosity with language, both on the page and off, may have been the main draw for the audience members of this sold-out event. This seems obvious—wielding words well is part of Smith’s profession—yet there is something about Smith’s voice that fans feel obligated to remark upon. “I just love her style of writing. It’s just beautiful. Even if it’s a novel...or these essays, it doesn’t matter what she writes, I just love the way she writes,” Boston resident, Alice E. Gray said.

“[Her voice] is extremely unique, and it’s consistent,” Tasha A. Sandoval, another Boston resident said. “Without fail, [it] comes through so powerfully and strongly.”

At the talk, Smith said she was shocked that certain sentences and even words could have a stranglehold on American policy, pointing to the logic of “Guns don’t kill people, people do” as a particularly egregious example. She went on to deconstruct the phrase “exploiting a tragedy” and the way opponents of gun control treat this phenomenon as “a horrible curse” in order to obstruct productivity in the wake of a shooting.

“I loved what she said about the word ‘exploitation,’ because...I am an alumna of Marjory Stoneman Douglas High School in Parkland,” Sandoval said. “I’m involved in some of the local activism around that. [Smith’s comment] gives me a really nice framework around which to think about the way ‘exploitation’ is happening around this issue in a positive rather than a negative way.”

Speaking of the world at large, Smith maintained this level of clear-eyed, righteous passion. Chakrabarti quoted Smith’s recent Guardian interview: “I… can’t stand dogma, lazy ideas, catchphrases, group-think, illogic, pathos disguised as logos, shoutiness, ad hominem attacks, bombast, liberal piety, conservative pomposity, ideologues, essentialists, technocrats, preachers, fanatics, cheerleaders or bullies.” At the theater, Smith added, “It’s quite a hard time to be alive if you feel that way.” Despite this in-depth discussion of world issues, she professed little interest in remaining in the loop beyond the bare minimum. “I just listen to the radio when I’m cleaning, so I get the main part… I get enough, let’s put it that way,” Smith said when asked about keeping up with the news. She said that she instead focused on what she found personally fulfilling, setting in opposition “The Kingdom” by Emmanuel Carrère (her preferred read) and five different newspapers (her husband’s). “To me, reading this 1000-page book about Christ was incredibly important to me, personally, “ Smith said. “And [Paul] Manafort and [Rick] Gates can wait. Or be summed up by my husband over dinner.”

Indeed, over the course of the event, Smith emerged as a champion of the self, keeping political demands at a distance. While she agreed that boundaries and allegiances are important, especially in these fraught times, she also reminded us that “there is another part of you that is intimate, that can’t stand on a podium.” It is this self, the self “whose boundaries are uncertain, whose language is never pure, whose world is in no way ‘self-evident,’” that Smith takes as her cause. “People are deeply various in themselves,” she said.

Smith made her thoughts most explicit when addressing the question of authenticity, which she believes is fundamentally misguided: “If you set the bar of a certain authentic experience, someone is always going to fall short of it… To me, I don’t want to block myself off from anything.” When asked about novelists who write about experiences they do not (and cannot) know, Smith argued that their success lies in the aesthetic as much as in the ethical. As long as their depiction is “convincing,” the novelists have free rein, made freer by Smith’s refusal of essentializing logic. “‘Anna Karenina,’ to my view, is convincing,” she said. “The problem with all these arguments is the idea that there is an essential female experience. What does it look like?... What does it mean to feel like a woman? I don’t know now! I’m 42, and I am in this gender, and I couldn’t tell you specifically what feeling like a woman is.” She rejected authenticity as restrictive, confining people to certain set behaviors because of their backgrounds, sapping them of their individuality, their ability to surprise, their freedom: “Say I’m reading a book about a mixed-race girl from London, and suddenly it doesn’t seem to me what I would feel. Okay! That’s okay. It’s not my experience, [but] I could never say that, ‘A mixed-race girl from London would never say that.’ I just can’t believe in a universe where it’s not possible that one of them might say that out loud. I can’t have that complete thought.”

Yet identity remains key to Smith, and its foregrounding—both literary and embodied—resonates deeply with her readers. “She’s a black woman, and so I feel a oneness with her,” Gray said. “The fact that on the stage, there are going to be two women of color, is really significant to me. Because I’m going to be 71 on Friday, and when I was a kid, when there was a black person on TV, everybody was in front of the TV, because you didn’t see yourself. But this is perfect, this is wonderful.”

—Staff writer Jonathan P. Trang can be reached at jonathan.trang@thecrimson.com